The star quarterback shockingly announced his decision to step away from football in at the age of 29.

While the decision to retire may have left Colts fans in a panic, perhaps no one was more relieved to see Luck walk away from the game than his loving wife Nicole. 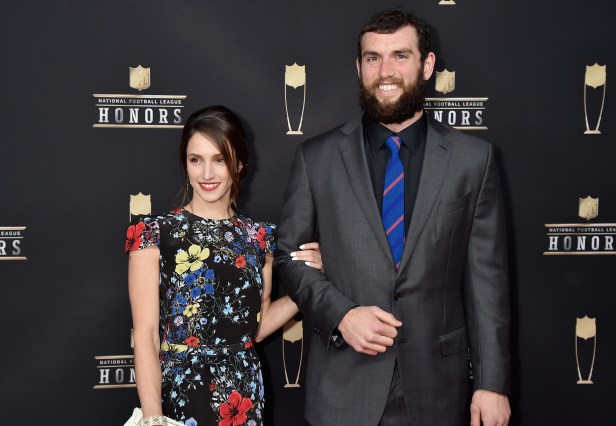 RELATED: Andrew Luck Retired Early, But Still Walked Away With a Fortune

Andrew Luck married longtime girlfriend Nicole Pechanec in 2019. They tied the knot at a private ceremony in Prague, Czech Republic.

Later that year, Luck and Pechanec announced the birth of their first child, a baby girl named Lucy Luck.

The happy couple met in college at Stanford University, where Andrew was a college football star. Nicole studied architectural design and was on the gymnastics team.

Pechanec works as a field producer and has employed by networks such as NBC Sports and ESPN to cover gymnastics broadcasts.

Have spent my birthday with this crew for 5 years now, different cities (and countries), same amazing people.?? #nbcsports @superherosthree pic.twitter.com/misHqUInpw

Looking back at Andrew Luck's career highlights! (via @nflthrowback) pic.twitter.com/c9kTSxoqJN

After deciding to attend Stanford, Luck enjoyed three sensational seasons that saw him throw 82 touchdowns to just 22 interceptions. He was the first-overall pick in the 2012 NFL Draft by the Indianapolis Colts and owner Jim Irsay. He headed to Indiana and was instantly a star.

Luck made three consecutive Pro Bowls to start off his career. He played in just seven games in 2015 and bounced back the following year.

However, a shoulder injury caused him to miss the entire 2017 regular season. Jacoby Brissett stepped up in Luck's absence, but the Colts football team struggled mightily without their star under center.

Luck returned in 2018 and led the Colts back to the playoffs, where they'd defeat the Houston Texans in the Wild Card game before losing in the next round. Luck earned AP Comeback Player of the Year honors and appeared to be getting back to his past self.

However, during the subsequent offseason, Luck shocked the league by announcing his retirement from professional football.

Across his NFL career, Luck never made a Super Bowl, but he played in the AFC Championship Game in 2014.

Andrew Luck pocketed $109 million in career earnings prior to his retirement. He still had three years and $64 million remaining on his deal with the Colts when he called it quits.

According to Celebrity Net Worth, the former football quarterback boasts an estimated net worth of $40 million.