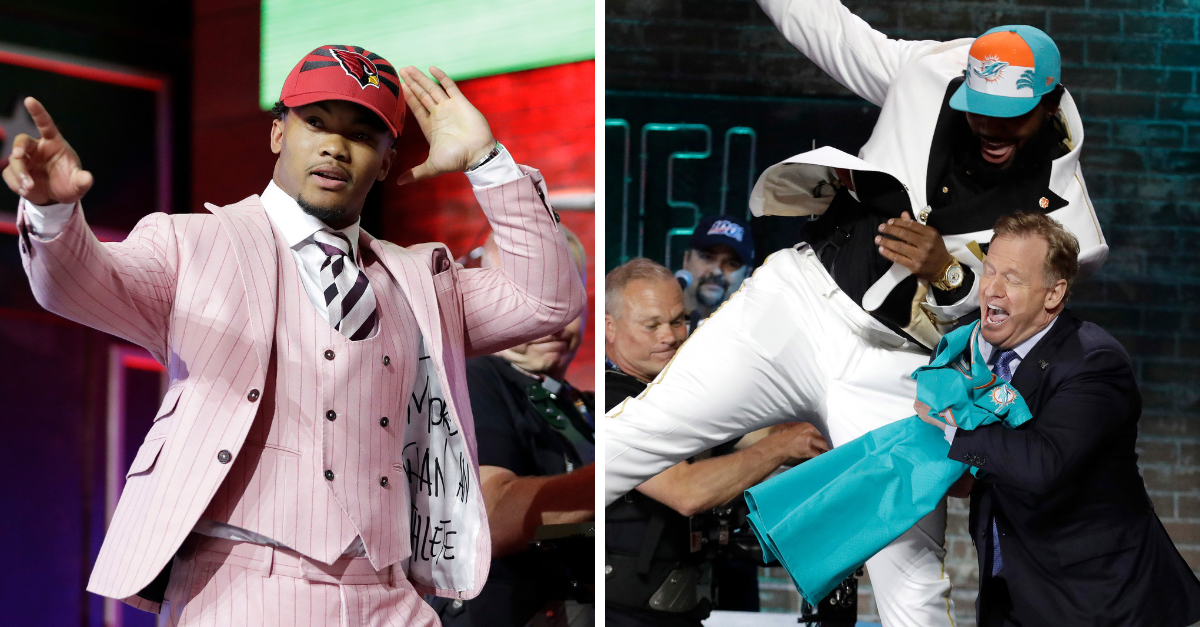 NASHVILLE, Tenn. (AP) ? A Heisman Trophy-winning quarterback at the top, two more QBs along the way ? and a whole lot of guys who like nothing better than putting passers on the ground.

That was the look for the first round of the NFL draft Thursday night.

Thank you, Red Sea, for showing your support! #CardsDraft pic.twitter.com/rrZwrNfLaZ

As thousands of fans withstood rain that began just about when Commissioner Roger Goodell spoke Murray’s name, the Cardinals spent a second straight high pick on a signal caller. Arizona moved up from 15th overall to 10th in 2018 to grab Josh Rosen.

NFL teams simply don’t do that, but with a new coach in college-trained Kliff Kingsbury, the Cardinals made the bold move. At least until they likely move Rosen elsewhere in a trade.

“My job is to come in every day, work hard and get better each and every day, do what I can to make this team better,” Murray said. “I’ve known Josh since high school, so me and him are cool. We got along really well, so I’ve always been fond of him. But us being teammates now, I can’t control anything but going in there and working hard.”

Resplendent in a pink suit ? nothing close to the Cardinals red he will be wearing in Arizona ? Murray was a first-round baseball pick by the Oakland A’s. He becomes the 22nd Heisman Trophy winner to go first overall and is the second straight Sooners quarterback to pull it off: Baker Mayfield went to Cleveland in 2018.

As for bypassing baseball, Murray has no qualms about the decision.

ICYMI: #Redskins select QB Dwayne Haskins at No. 15 and trade with the Colts to select EDGE Montez Sweat at No. 26 in first round. #SkinsDraft | #HTTR pic.twitter.com/1TIpX16ImQ

With quarterbacks so in demand these days, the Giants might have reached a bit for Duke’s Daniel Jones at the sixth spot, and the Redskins did just the opposite to get Dwayne Haskins. They stayed put at No. 15 and the Ohio State star fell to them.

Perhaps serendipitously, he held a bowling party about 30 miles away Thursday night.

“I’m just going to work on getting my head in that playbook,” said Haskins, a one-year starter for the Buckeyes. “I’m going to do all I can to get physically and mentally ready for the upcoming season and just motivate my guys that’s coming in with me in this rookie class.”

After Murray, though, defense became the order of the night. Of the first 20 picks, 12 were for that side of the ball, all of them pass-rushing threats.

Ohio State edge rusher Nick Bosa went second to San Francisco as expected. The 49ers have used a first-round selection on four defensive linemen in the past five drafts.

The moment @nbsmallerbear's name was called. #49ersDraft is just getting started. Tune in to the #NFLDraft April 25th-27th on ABC, ESPN, NFL Network and online at https://t.co/rWmSCfNTSH pic.twitter.com/qaPc7siGxM

“I see him as a three-down player,” general manager John Lynch said. “He’s got to come in and do it, but he plays the run well. His best strength is rushing the passer, but he can play all three downs and play in all situations.”

Bosa’s older brother, Joey, plays for the Chargers and was the 2016 Defensive Rookie of the Year. Their father also played in the NFL.

“Good genes, man,” Bosa said with a laugh. “It was just excitement all around. My brother wanted me to go higher than he did (third overall), so just for my dream to come true and my family to be there to watch, it was pretty great.”

Bosa is the highest Ohio State draft pick since offensive tackle Orlando Pace went No. 1 to St. Louis in 1997. He missed all but three games last season with a core muscle injury, but already had exhibited the kind of playmaking that lifts players to loft status. Such as the second pick in the draft.

The Jets, widely speculated to trade the third pick, used it on Alabama defensive tackle Quinnen Williams. Not even a starter until 2018, he won the Outland Trophy last season and is Alabama’s highest-drafted defensive player since linebacker Cornelius Bennett went No. 2 overall in 1987.

The Giants, looking for Eli Manning’s eventual successor, took Jones, the Senior Bowl MVP. Jones generally was not considered a first-round prospect when the college season ended. But he’s been tutored at Duke by David Cutcliffe, who also coached Peyton and Eli Manning in college.

“I think it’s a tremendous opportunity to learn for a young quarterback, Jones said of Eli Manning.

“He is a guy that’s had a whole lot of success in the NFL and there is a reason for that. I’m looking to understand that and do my best to learn as much as I can from him while he’s in New York.”

Finally, in the 10th spot, a trade: Pittsburgh sending the 20th spot, the 53rd selection and a third-rounder next year to Denver. The Steelers, with Hall of Famer Joe Greene making the announcement, selected Michigan linebacker Devin Bush ? a player apparently coveted by AFC North rival Cincinnati at No. 11.

Only fitting that Joe Greene welcomed the newest member of the defense to Pittsburgh.#SteelersDraft | @_Dbush11 pic.twitter.com/tEV5Fg4uta

Three consecutive picks were dealt later in the round. Denver had gotten No. 20 from the Steelers and took Noah Fant, the second Iowa tight end chosen Thursday night. Green Bay acquired the next pick from Seattle and got Maryland safety Darnell Savage, a somewhat surprising choice. Then the Eagles dealt with Baltimore and probably got a replacement for longtime left tackle Jason Peters with Tytus Howard of Alabama State, the initial non-FBS player chosen.

One spot later, at No. 24, Oakland used its second pick on Alabama’s Josh Jacobs, the first running back to go. The Raiders’ third selection was Mississippi State safety Johnathan Abrams.

Baltimore’s new GM, Eric DeCosta, made his first choice in charge of the draft Oklahoma receiver Marquise Brown, who also wept upon being called.

Through its bartering, Seattle had consecutive spots at 29 and 30, selecting TCU’s L.J. Collier ? yet another defensive lineman ? before sending the 30th to the Giants, who grabbed cornerback DeAndre Baker of Georgia. That gave New York three first-rounders.

One team that stuck to the trenches, but on the offensive side, was Atlanta. Desperate for blocking help, the Falcons drafted Boston College guard Chris Lindstrom and Washington tackle Kaleb McGary, who they got by trading back into the opening round to get the Rams’ 31st spot.

New England concluded a first round that saw 18 defensive players taken (only three in the secondary) and 14 on offense with receiver N’Keal Harry of Arizona State.

Overall, the SEC had nine players, the ACC eight and the Big Ten seven. Clemson, Alabama and Mississippi State had three draftees apiece.