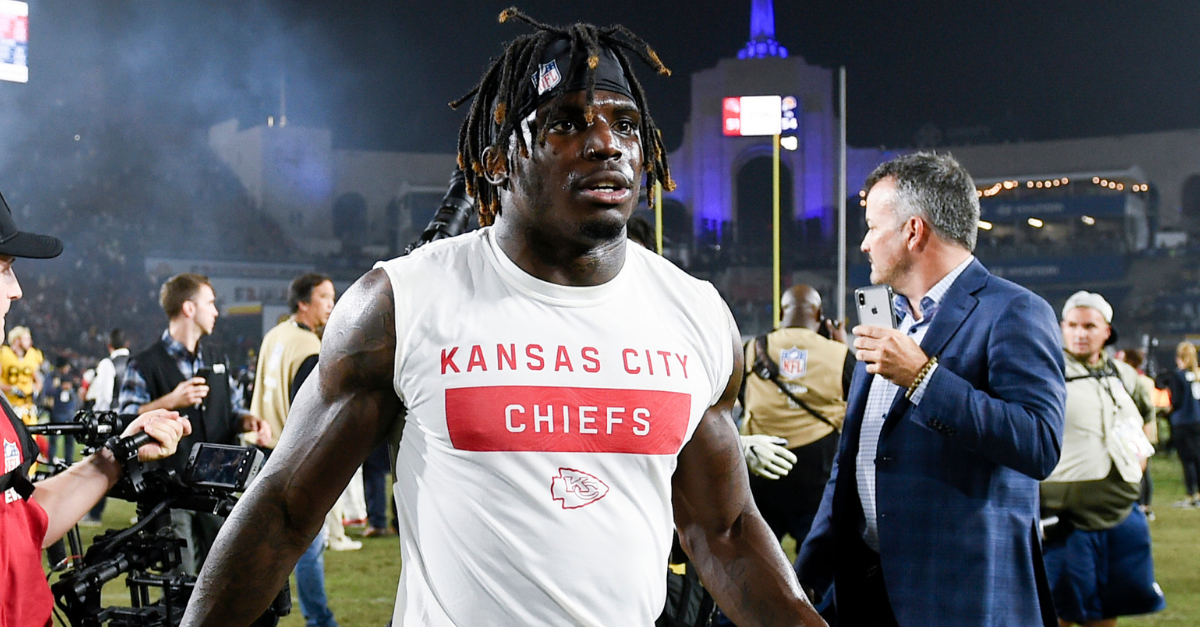 OLATHE, Kan. (AP) ? Chiefs star wide receiver Tyreek Hill maintained his innocence Thursday after prosecutors in suburban Kansas City declined to charge him in a domestic incident involving his fiancee and 3-year-old son even after concluding a crime occurred.

Hill said in a statement provided by his attorney that his “son’s health and happiness is my number one priority.” Hill also said that his focus is on “working hard to be the best person for my family and our community that I can be, and the best player to help our team win.”

Tyreek Hill released a statement through his attorney in which he maintains his innocence. pic.twitter.com/jzPKMyMQpv

Police were called to the Hill’s home twice last month, and investigators determined that his child had been injured the second time. On Wednesday, the district attorney in Johnson County, Kansas, declined to press charges because he could not determine who was responsible for the injuries.

“We are deeply troubled by this situation,” DA Steve Howe said. “We believe a crime has occurred, however, the evidence in this case does not conclusively establish who committed this crime.”

The Chiefs said they were aware of the prosecutor’s decision but declined further comment. Howe said the NFL attempted to contact the district attorney’s office to gather information for its own investigation. The league could still punish Hill even though he was not charged with a crime. The league has declined to comment on the case.

Hill’s attorney, Trey Pettlon, said that the receiver has cooperated with law enforcement throughout the investigation. Pettlon also said that Hill waived his Fifth Amendment rights, answered questions from law enforcement and the Department of Children and Families, and that he would continue to cooperate with authorities as they provide a safe environment for the child.

Howe would not say who has custody of the child because of an ongoing DCF investigation.

“We’re talking about a minor, a child, and the system and DCF and in child investigations, we have to be very cognizant about protecting the rights of the child,” he said. “We have to respect the wishes of the individuals involved in the case.”

District Attorney announced he will not file charges in the investigation against Chiefs’ WR Tyreek Hill. A crime has occurred but no conclusive evidence as to who committed it.

Hill is a two-time Pro Bowl wide receiver with a history of domestic issues, including a case in which he was accused of punching his fiancee, Crystal Espinal, while he was at Oklahoma State.

Hill is entering the final year of his rookie contract, and the Chiefs have little depth at wide receiver. That means it is possible the Chiefs could target a pass-catcher when they make one of their three picks Friday night ? they traded their first-round pick to Seattle earlier this week as part of a package to acquire pass rusher Frank Clark.

“I don’t know if it changes the priorities. We have a good group of guys that we really like,” Veach said of Hill’s situation. “I think we have some guys that are still here that maybe people don’t know about or realize that we know more about. But receiver, if there is a receiver that we like, early on we absolutely wouldn’t hesitate to pull the trigger.”