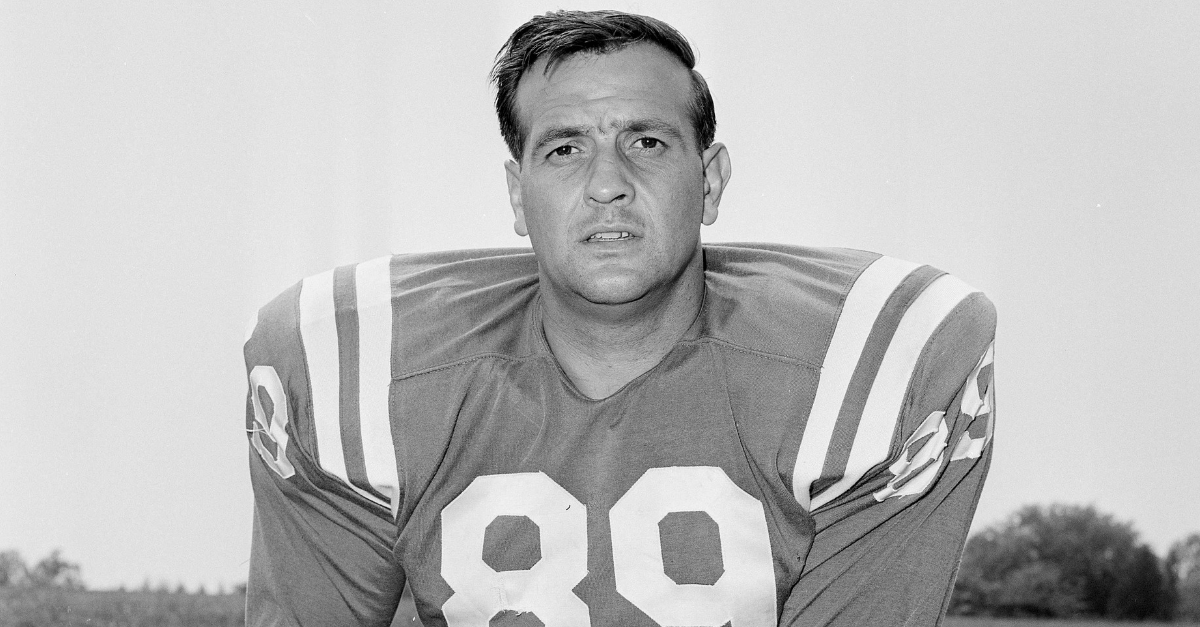 Marchetti was named to the Pro Bowl during 11 of his 14 NFL seasons. Though undersized for the position by today’s standards ? 6-foot-4, 244-pounds ? Marchetti effectively tracked down quarterbacks and stuffed the run.

“I was small, but big guys never scared me,” he once said. “I was quick and agile.”

“They called him Gino the Giant because he was one of the biggest people in the league,” former NFL general manager Ernie Accorsi said. “He was quick, he had great athleticism and he would just throw you.”

Gino John Marchetti was born in 1926 in Smithers, West Virginia. He broke into the NFL as an offensive lineman in 1952 with the Dallas Texans, who became the Colts in 1953.

After being moved to the other side of the line, Marchetti became a star.

With Marchetti charging from the left side, the Colts were NFL champions in 1958 and 1959. He broke his leg in the fourth quarter of the so-called “Greatest Game Ever Played” ? the sudden-death duel between the Colts and New York Giants in 1958 ? but refused to be taken into the locker room.

He watched from behind the end zone until agreeing to being taken to the locker room early in overtime, a concession to the freezing temperatures and fear that the crowd would rush onto the field at game’s end.

Not long after that, Johnny Unitas guided the Colts to the winning touchdown to end a 23-17 duel that came to be known as “The Greatest Game Ever Played.”

Statement from the Baltimore Ravens on the passing of Gino Marchetti: pic.twitter.com/ssyBqH0ZPu

Though sacks were not recognized as a statistic in those days, Marchetti brought fear to quarterbacks.

Marchetti was elected to the Hall of Fame in 1972 along with college teammate Ollie Matson.

“Rest in peace, Gino Marchetti,” Colts owner Jim Irsay posted on Twitter. “The son of immigrants ? and a veteran of the Battle of the Bulge against the Nazis ? Marchetti was one of the greatest to play the game, Gino was a player who helped turn the nation’s attention toward the ‘new sport’ on television.”

Rest in peace, Gino Marchetti. The son of immigrants—and a veteran of the Battle of the Bulge against the Nazis—Marchetti was one of the greatest to play the game, Gino was a player who helped turn the nation's attention toward the "new sport" on television.

Marchetti fought in the Battle of the Bulge in World War II before playing for the 1951 University of San Francisco team that went 9-0. The roster had eight players who would go to the NFL, including two African-Americans: Matson and Burl Toler. After the season, the squad unanimously voted to reject a bid from the Orange Bowl that was contingent on USF participating without its African-American players.

“Nobody on that team ever said that they regretted the decision that we had made,” Marchetti said. “It was 100 percent in favor of not playing. So, we didn’t go. I went home and went back to work.”

Not long after that, he was drafted by the Texans. Though the team went 1-11, Marchetti caught a touchdown pass during a very brief stint as a tight end.

Marchetti retired after the 1964 season to start a hamburger chain that became a huge success. Its best-selling burger was aptly named “The Gino Giant.”

Marchetti’s biggest paydays came from the restaurant business. He made millions of dollars before Gino’s Hamburgers was sold to Marriott Corporation in 1982.

Colts coach Don Shula persuaded Marchetti to return in 1966. He played in four games at age 39 before retiring for good.

Gino Marchetti’s jersey on display in the museum pic.twitter.com/kghi77jDgZ

“Gino Marchetti dominated the football field during his career in the 1950s and ’60s as a leader of the great Baltimore Colts teams of that era,” said David Baker, president and CEO of the Hall of Fame.

“His ferocious style of play defined the character of a man who possessed a strong desire to succeed, passion, and determination that made him a great teammate.”

He remained popular in Baltimore long after his retirement, and while the city embraced its newest team, the Ravens, who relocated from Cleveland in 1996.

The Ravens posted on Twitter: “A giant of a man with a giant heart who helped many in need, Gino Marchetti is at or near the top in Baltimore athletic and football history. Beloved in Baltimore, this Pro Football Hall of Famer loved our community and the fans who were so special to him.”