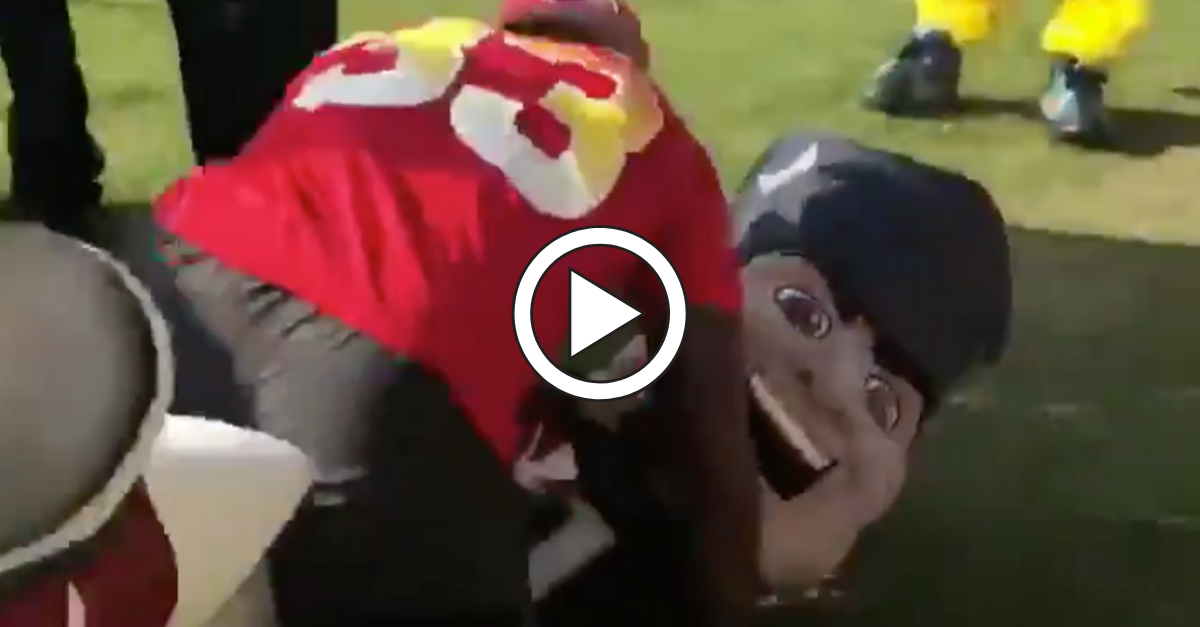 For all of the New England Patriots haters out there, and you better believe there?s more than a small handful, New York Jets safety Jamal Adams was looking to be the hero nobody expected. As it turns out, though, his impromptu plan backfired on him in a big-time way.

They say it?s all fun and games until someone gets hurt. Well, it happened. While the 6-foot, 210-pound Adams was signing autographs at a Pro Bowl practice in Orlando, Florida, he noticed Pat Patriot ? New England?s official mascot ? nearby. So he thought it would be a good idea to tackle him and post the hit on social media following the NFL Pro Bowl Skills Challenge.

This one is for every Patriots hater out there! I got y’all! pic.twitter.com/q0WAbDfrpL

The Jets’ Jamal Adams stood over the person inside the mascot costume and got a big cheer from the crowd on hand. It seemed like a harmless act and a little fun before the stars from the AFC and NFC played each other at Camping World Stadium in the week before Super Bowl LIII.

ESPN?s Michael DiRocco reported the person Adams tackled was hospitalized on Thursday morning. That proved not to be the case by Mark Daniels of the Providence Journal.

“He was not hospitalized. He did seek medical treatment from the on-site medic. It was a painful attack,” Daniels posted in a tweet.

On the Patriots mascot incident with Jamal Adams, from a team spokesperson: “He was not hospitalized. He did seek medical treatment from the on-site medic. It was a painful attack.”

Still, it wasn’t the greatest decision during 2019 Pro Bowl festivities.

“He was running around and everybody was booing him, so I said, ?You know what? Let me go tackle him. I didn?t hit him that hard, man. All jokes aside, I didn?t hit him that hard. I don?t know what?s really going on, but they did tell me he?s in the hospital. My intention was never to hurt him. it was all about just a joke but I definitely want to check on him and make sure everything is good. At the end of the day we were out here just having fun and it wasn?t nothing intentionally to try to hurt the guy.?

Adams, the No. 7 overall pick in the 2017 NFL Draft from LSU and Pro Bowl selection, has made hundreds of tackles during his career. Let?s just say this one on Pat Patriot wasn?t his best.

MORE: Is Tom Brady a Cheater? This 10-Year-Old Used Science to Prove It