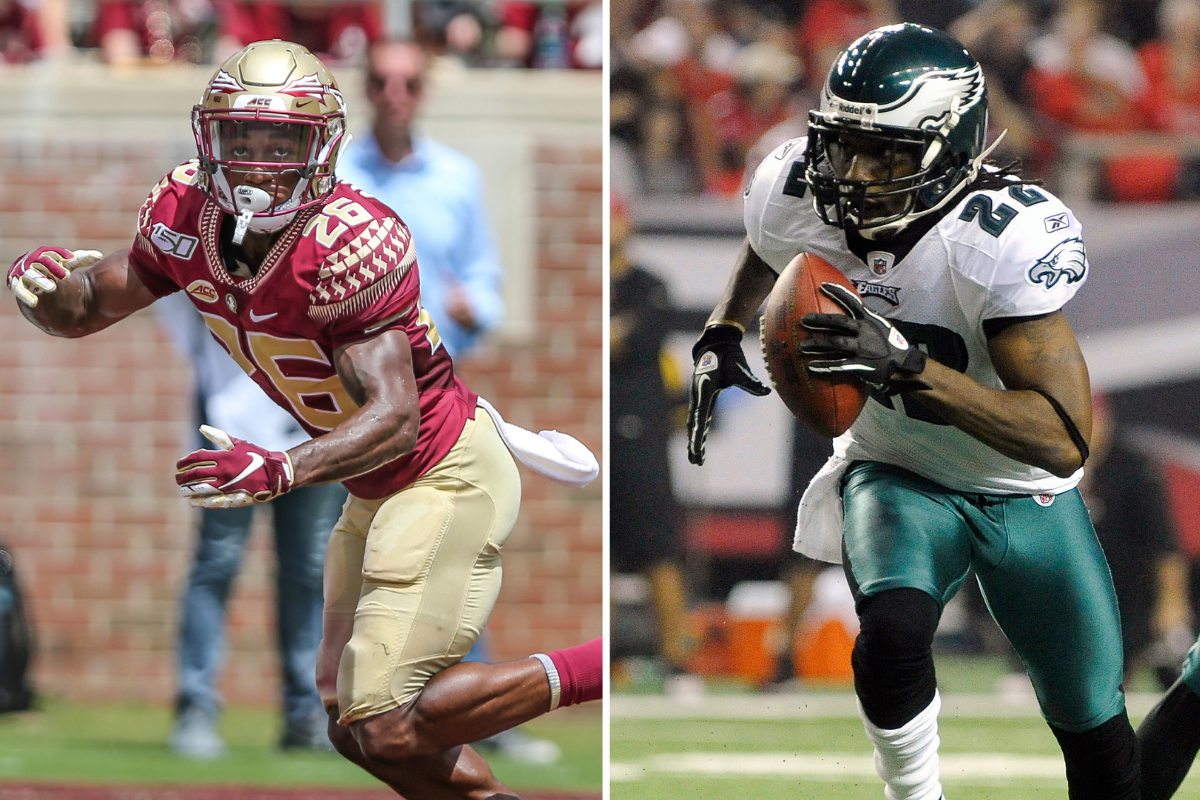 The weight of being a Junior is more than some people can handle. Some people hide from the weight of their name while others add to it. It all depends on the Junior and what they can handle.

Florida State Seminoles cornerback Asante Samuel Jr. can handle his name. He might even add more weight to it and then do a few reps. Samuel Jr. completed his junior season in Tallahassee before declaring for the 2021 NFL Draft. But he wasn’t the first Asante Samuel to declare for the league.

Asante Samuel Jr. is the son of Asante Samuel, a two-time Super Bowl champion with the New England Patriots and Tom Brady’s No. 1 fan. Samuel Senior is retired, but Junior is just getting started.

From wide receiver eater at St. Thomas Aquinas High School to First-Team All-ACC to top NFL Draft prospect, Junior is becoming the only Asante Samuel you need to know about.

Asante Samuel welcomed Asante Jr. to Fort Lauderdale and the world on October 3, 1999, three days before Clemson QB and draft-mate Trevor Lawrence was born. While Lawrence avoided interceptions, Samuel Jr. gobbled them up.

Samuel Jr. was a four-star recruit out of high school and fielded offers from Alabama, Georgia, South Carolina, and even UCLA. He chose to stay close to home with Florida State University (FSU). He was able to make an immediate impact in the NCAA as a freshman, but had an even bigger impact as a sophomore.

Samuel Jr. brought that same energy with him to the shortened 2020 season. During the first game against Georgia Tech, he snatched two interceptions. He capped his junior season off with great performances against college football powers such Miami and North Carolina. ESPN draft boards soon took notice, and Samuel Jr. was on the rise.

Based on the latest estimates, it’s safe to say Samuel Jr. will go higher in the draft than Samuel Sr. did. No one is more proud of that than his father.

RELATED: Trevor Lawrence’s Hair is a Big Part of His Superstar Identity

Just like Mike Jones (Who?), Asante Samuel, Samuel knew how to win, win.

Samuel was underrated and under drafted out of the University of Central Florida. He would prove his critics wrong by winning two Super Bowls with the New England Patriots. In his last season with the Pats, Samuel was First-Team All-Pro and selected for his first Pro Bowl of four in a row. The following three Pro Bowls would be with the Philadelphia Eagles.

The defensive back finished his career in Hotlanta with the Atlanta Falcons. Luckily for him, he retired four years before Atlanta’s 28-3 Super Bowl Fiasco, an event we should never stop talking about.

Asante Sr. retired an all-time great in the NFL. Every team he played for in his career has shown interest in drafting his son.

Asante Jr. is an all-time great trash talker, a trick he learned from his father. It’s one of many traits he’s picked up from dad. But Junior doesn’t want to be defined by Senior’s accomplishments.

He doesn’t deny his father’s influence on his game so much as just avoid the subject altogether. He seeks to do it his own way. And pops couldn’t be more proud.

The next great cornerback out of @FSUFootball?

CB Asante Samuel Jr.’s college career is on his scouting report, not his father’s. His time in the NCAA will serve him well in the NFL. He’s gained strength in the offseason and had a better pro day than expected.

In many a mock draft, Samuel Jr. looks to go late first round or possibly be an early second-round pick. Samuel Sr. wasn’t drafted until the fourth round.

But it takes more than individual talent to make it in the NFL. Samuel Sr. joined the Patriots at a time when they couldn’t be stopped. Samuel Jr. could only hope to be so lucky.

Junior or Senior, four out of five wide receivers agree – they’d rather not be covered by Asante Samuel.