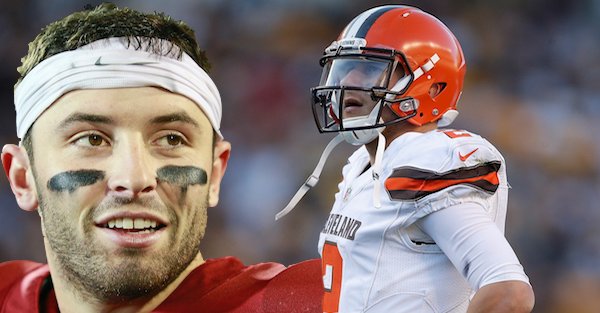 Baker Mayfield is a Heisman Trophy winner and he was clearly a tremendous college quarterback.

With that said, there have been concerns surrounding Mayfield and his character, if not his temperament, and those concerns have drawn comparisons to another talented college quarterback and Heisman Trophy winner, Johnny Manziel.

Manziel was incredible as a college quarterback but he famously busted out of the NFL because of his character concerns, as well as his off-field habits.

For Mayfield, that’s a comparison that simply doesn’t make any sense.

Here’s what he told The Denver Post regarding questions surrounding his off-field behavior as well as character and temperament:

“Everybody wants to portray the bad boy, the Johnny Manziel stuff, but I love the game of football,” Mayfield said. “There’s no doubt about that. I’m an emotional player. I do anything it takes to win. I love being around my teammates and I love leading and having responsibility.

“I came down here to play the game and show them that I love playing.”

Of course, Mayfield will have to do more than talk about how he’s simply just a passionate competitor. He’s been involved in a number of questionable moments, including an arrest, a dramatic moment at Ohio State and inappropriate sideline conduct against Kansas this past season.

Whether or not he can handle that pressure still remains to be seen, but he seems to beleive it shouldnt be an issue.