For those that have been playing fantasy football for years now, you may be stuck on a platform that your league has used since the beginning. However, you may not recall what made you pick that platform. To be fair, there was a time when there were limited options for fantasy football providers as the game was not as popular as it is in 2022. But with the 2022 NFL Season about to start, some new leagues are beginning to form and last year's champions are getting ready for title defenses.

Today, the game of drafting your favorite players and competing against friends is constantly growing, and there are numerous platforms to choose from. For a new player, sure, you may have a friend who's getting you in on the game and has a pre-arranged site to craft the perfect lineup on, but what if that's not you and you're curious about where you should lay down your roots in the fantasy world for years to come? What are the best NFL Fantasy Football sites for your Fantasy Football League?

Here, we're going to examine six sites -- Yahoo!, ESPN, Fantrax, NFL.com, Sleeper and Fleaflicker -- to weigh the pros and cons to see which site may be the best for you. 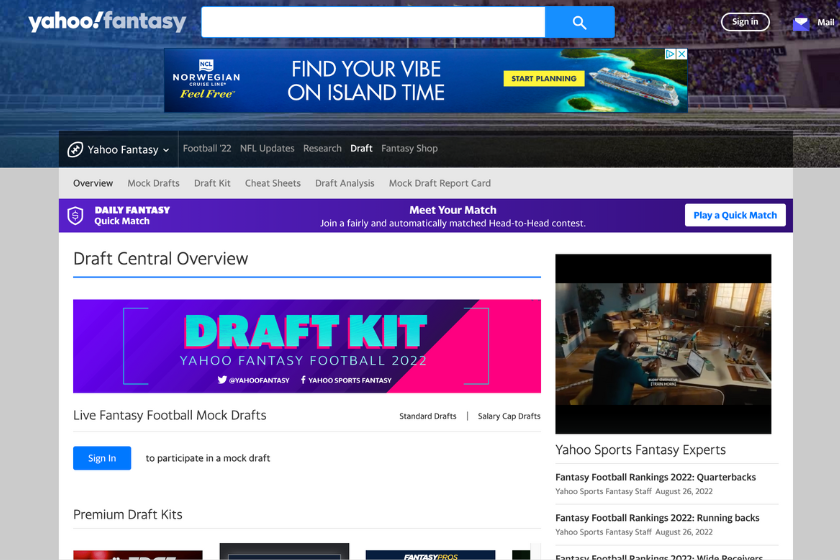 Since 1999, Yahoo! Fantasy has been the go-to home for thousands of fantasy leagues. In fact, this branch of the company is what has helped Yahoo! stay afloat as an entity altogether.

The mobile app and site have massively improved over the years, making it easy to access all necessary league information due to a menu across the top of the home page of your fantasy league. In the past, if you were a league commissioner, you couldn't assign specific accesses unless you were on a desktop. However, that has changed. Also, for players on your roster, experts at Yahoo! Fantasy will provide a 40-second or so clip discussing the player's outlook and projections for that week.

If you're interested in daily fantasy sports, like DraftKings and FanDuel,  Yahoo! does offer its take on it. The app and site have always been free to use and even supply content about waiver wire picks, for example, and offer rankings that you can view in the app.

As one of the longest-tenured platforms in the business, this one will be tough to beat. Whether you want to start a dynasty league or just a season-long campaign with friends Yahoo! Fantasy Football is one of the best fantasy football apps around, and is sure to add more users ahead of the upcoming NFL season.

Where Yahoo! could improve, however, is more consistent alerts for injuries and news and doing something with drafting in the app. Right now, most players who play Yahoo! Fantasy will download another app to get up-to-date alerts.

Also, for those wanting to mock draft to prepare for the draft, there's no ticker to show you how long until your pick is when you're tabbed out of the app or looking at your list of active mock drafts.

When you exit the app and come back, you'll need to reload the entire draft, which could result in missing picks. 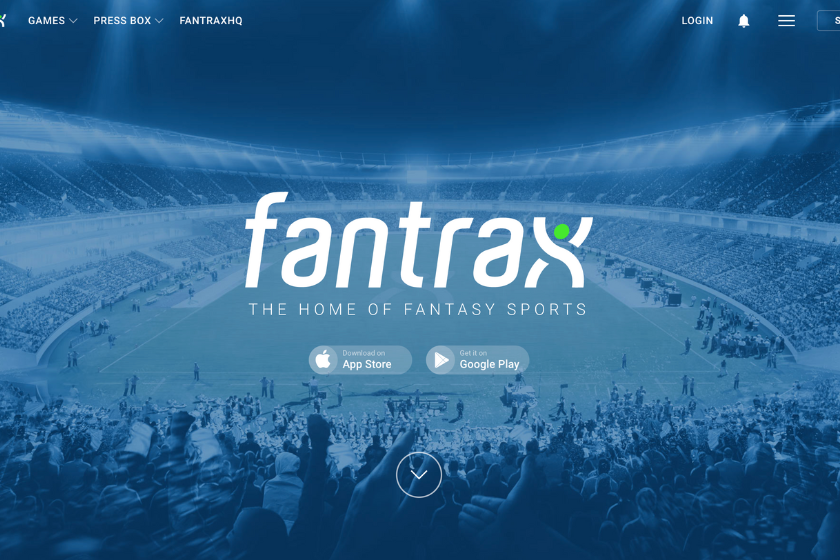 RELATED: Fantasy Football Studs & Duds: 7 Running Backs Who Can Change the Course of Any Draft

While relatively simplistic in terms of site design, Fantrax has plenty of innovative features that could make the game of fantasy more engaging. For starters, you can perform multi-team trades. This occurs in real sports but hasn't seemed to catch on with the more "mainstream sites" like ESPN or Yahoo!

There are plenty of customizable aspects of leagues, too, including scoring per position and the positions players can play. With other sites, players may need to play a certain amount at a position before receiving a designation, but with Fantrax, you can do that immediately.

If you're an advanced fantasy player, Fantrax will be more than fine. That said, if you've only ever used one platform or are brand new to the game, there could be a bit of a learning curve due to all the tools at your disposal. The customization is an enticing part of the site; however, depending on your league's commissioner, a league could implode relatively quickly due to changing scoring settings and things of that nature.

You will receive an alert of these changes, but if you're in no position of power, it could be something you're forced to just deal with, making the league irrelevant for you. The likelihood of that happening isn't necessarily large, but something to keep in mind. 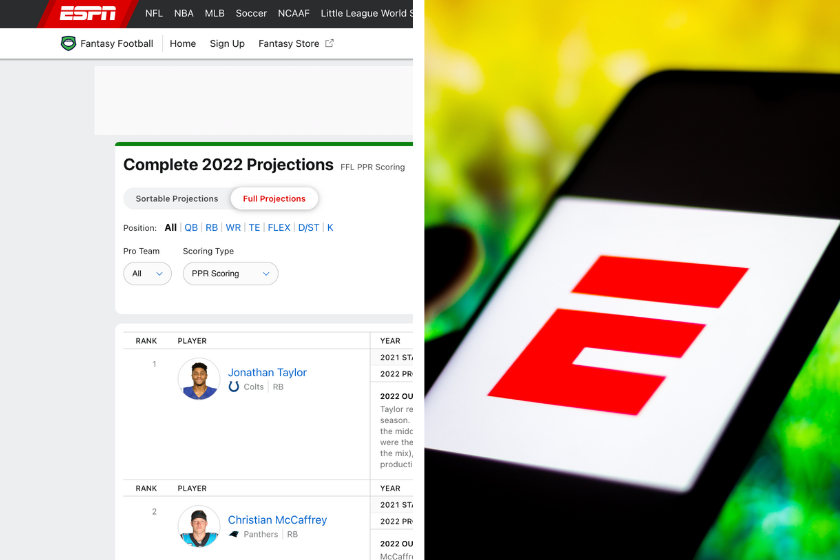 Everyone playing fantasy football knows what ESPN is, so this is always a great go-to platform for new players because of that alone. It's clear ESPN knows this because the site is catered more, in general, to those newer players.

Everything is simple and easy to use, including the mobile app. You can read fantasy football content from various ESPN personalities, though some content will require an ESPN+ subscription. The IBM Watson tool is also used to help new players decide which players to start based on projections. Even their fantasy football draft software is easy to use.

If you're a new fantasy football player, ESPN Fantasy Football will be great for you.

Due to catering to that newer player demographic, the settings for leagues aren't as vast as a Fantrax, for example. So, for players looking to get a bit more experimental, ESPN may not have those settings provided for you. 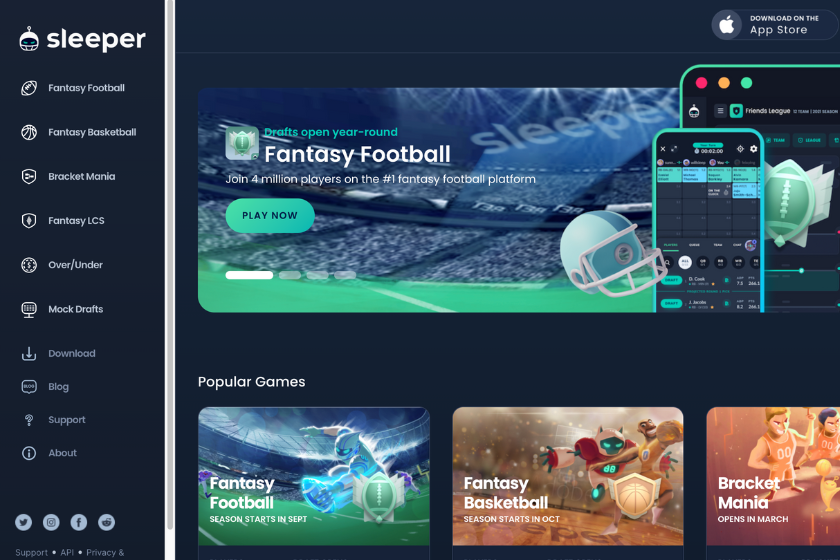 If you play fantasy football on another platform, there's a good chance you also have the Sleeper app for alerts. As a personal user of the app, the alerts you receive are immediate. If you have Twitter notifications on for top-beat writers, you'll notice that you receive the information from Sleeper within seconds after. From there, each news topic has a discussion where you get to see a social media-like message board with people discussing -- usually making fun of, to be fair -- each transaction.

On the app, when you're in a league, the league chat is prominent. It's not just talking via message boards or something slow -- it's like being in a Facebook group message or group text chat. Sleeper is a highly modern and exciting fantasy app.

The Sleeper app has menus from the bottom, left and right of the app. At times, navigating through the menus can get confusing, and there's no clear way to go back to the default home page. 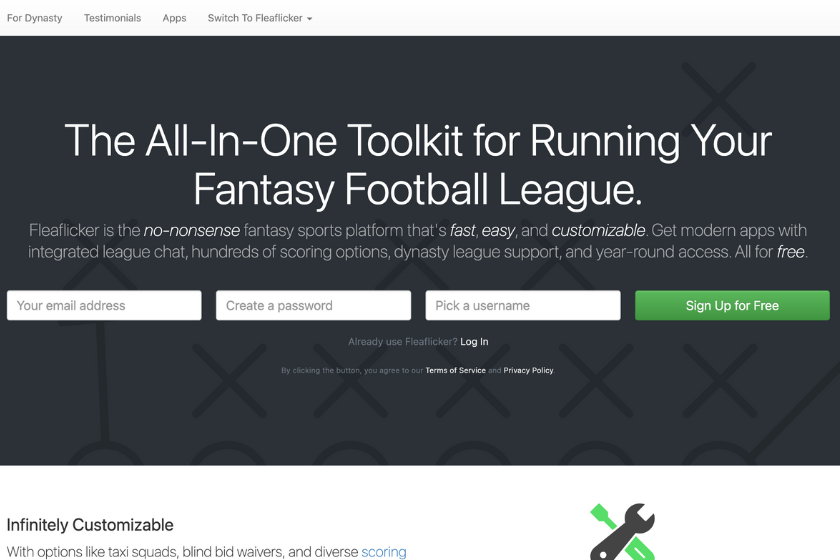 For those who may not be able to make a live draft, Fleaflicker offers an email draft setting where players can have about eight hours per pick or less, depending on your choice. Like Fantrax, there are plenty of customization options to make your league exactly what you'd like. There's a mobile app available as well.

With Fleaflicker, it's not uncommon to see ads on the site. You can purchase a monthly subscription to remove ads, however. Compared to the other platforms on this list, this isn't anything you'll ever run into. While there's customization, the site is dated compared to the others, and it's far from visually or aesthetically pleasing.

Overall, Fleakflicker doesn't have much to offer other than email draft capabilities that you can't find elsewhere. 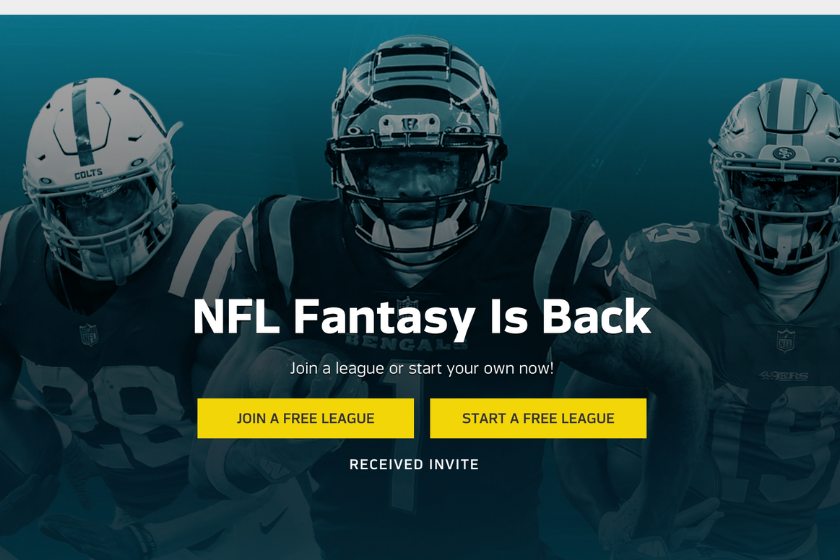 With this being on the NFL.com site, you'll have access to things you simply won't elsewhere, such as the ability to watch highlights directly on the app or site on your fantasy page. You can also pay a subscription for a Trade Machine tool and watch games directly through the app if you have Red Zone.

For new players, an optimized lineup tool will auto-fill your lineup with the top projected scorers, removing the need for you to pick and choose your lineup each week.

Lastly, while Next Gen Stats are available to everyone, you can access them here and have your fantasy team and this all in one source, making it easy to access and assess player value in another way beyond the box score statistics.

NFL Fantasy is similar to ESPN because it's great for beginners but has limited league settings. The mobile app has improved substantially, but it's still fairly basic compared to Yahoo! or ESPN. It's easy to use, and navigating around is easy. Still, you won't find things like article content, rankings, or videos from experts for each player. 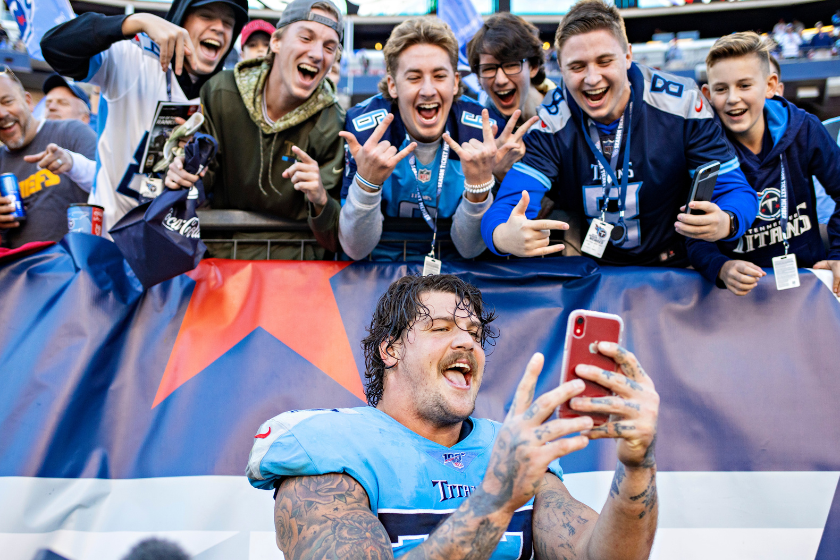 All six fantasy football platforms listed here have something going for them that other sites do not. There's excellent customization with Fantrax; NFL exclusive video content with NFL Fantasy; IBM Watson with ESPN; an elite alert system with Sleeper, and so on. However, when it comes down to it, the site online since 1999, Yahoo! Fantasy, is simply unmatched.

While there could be more settings similar to a Fantrax or Fleaflicker, there's nothing you can do on this app that you can't simply access by also having these other apps. Sites like Sleeper are modern, but for most, it's viewed as a fantasy alerts app instead of an actual site for creating a league.

Other options include MyFantasyLeague (MFL) and CBS Sports Fantasy, should you be looking for a different set of requirements.

Whether you're a new player or have been playing since 1999, Yahoo! Fantasy's system will cater to your needs if you're trying to decide where to create your league, head over to Yahoo! Fantasy.