Vegas sportsbooks came out of the divisional round with little damage done to their bottom line, with one exception. The Buffalo Bills were 5.5-point home favorites heading into their playoff matchup against the reigning AFC champion Cincinnati Bengals. It's important that we mention the Bengals' success last year, because by all the talk surrounding this game, you would have thought the Bengals limped into the playoffs at 9-8. Contrary to what many thought would happen, the Bengals left Highmark Stadium serenaded by choruses of "Who Dey think they gonna beat 'dem Bengals?" But the cherry on top of their divisional-round victory came from the mouth of Cincy's star signal-caller, Joe Burrow. 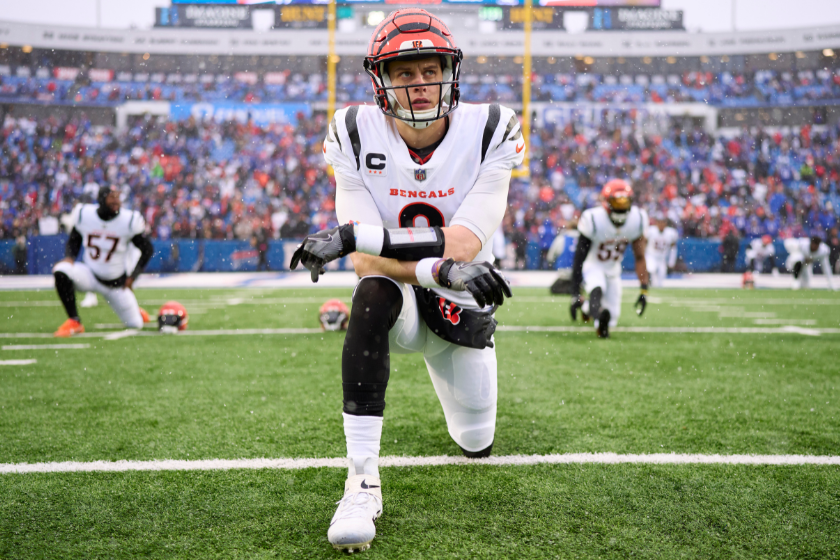 RELATED: Joe Burrow's Girlfriend Olivia Has Been His No. 1 Fan Since College

When CBS sideline reporter Tracy Wolfson asked the first-overall pick from the 2019 NFL Draft what he thought about all of the talk surrounding a neutral site AFC Championship in Atlanta, Burrow had one thing to say: "Better send those refunds."

Burrow was referring to the NFL's announcement regarding ticket sales for the neutral site AFC Championship game that would have taken place if the Bills and Chiefs had both advanced to the conference championship. "More than 50,000 tickets were purchased by the clubs' Season Ticket Members in the first 24 hours of the announcement," the NFL said in a statement. "The ticketing plan enables Bills fans to be seated on their side of the field and Chiefs on the other.

"Both the Bills and Chiefs will continue to work with their Season Ticket Members to provide priority access, subject to availability. The NFL will announce any updated pre-sale or general on-sale opportunities, if tickets are available, at a later date."

Thanks to another legendary playoff performance from Burrow and the Bengals, that later date will never arrive.

"It was a complete game from everybody. Offense, defense, special teams. Domination from start to finish," Burrow said in his postgame on-field interview. "That's what we expected, but the job's not finished. We've got another big one next week on the road. I'm excited for it."

As Wolfson teed up a question regarding the neutral site game, Burrow leaned in to make sure he got every bit of the question. Finally, through a wry smile, "Joe Cool" delivered the line of the year.

?Domination from start to finish ? that?s what we expected.?

"Better send those refunds," the Bengals QB said with a laugh, letting everyone know that this Bengals team is one that has heard the way the media and pundits have talked about them, and they're ready to prove everyone wrong.