What can you do in 13 seconds? Take a few deep breaths. Hug a loved one. Throw a ball. Send a short text message. 13 seconds goes by awfully quickly. But, if you are Patrick Mahomes and the Kansas City Chiefs -- 13 seconds is all you need to make history, giving birth to the newest AFC rivalry.

This week, Josh Allen and the Buffalo Bills will march into Arrowhead Stadium for the first time since their wildly entertaining playoff meeting in Kansas City last January. Buffalo and Kansas City are both heading into the sixth week of regular season action 4-1. And it may only be Week 6, but the winner of this week's rematch will find themselves eclipsing all other AFC teams for the coveted top spot and sole AFC team sitting at 5-1.

There's a lot at stake -- the biggest of them all being bragging rights. The Bills are hoping to erase the memory of their heartbreaking loss the last time they played in Arrowhead. The Chiefs are striving to remind the entire league, and Buffalo, that you should never count Kansas City out -- they only need 13 seconds to ruin your day.

A Look Back at the Greatest Playoff Game Ever? 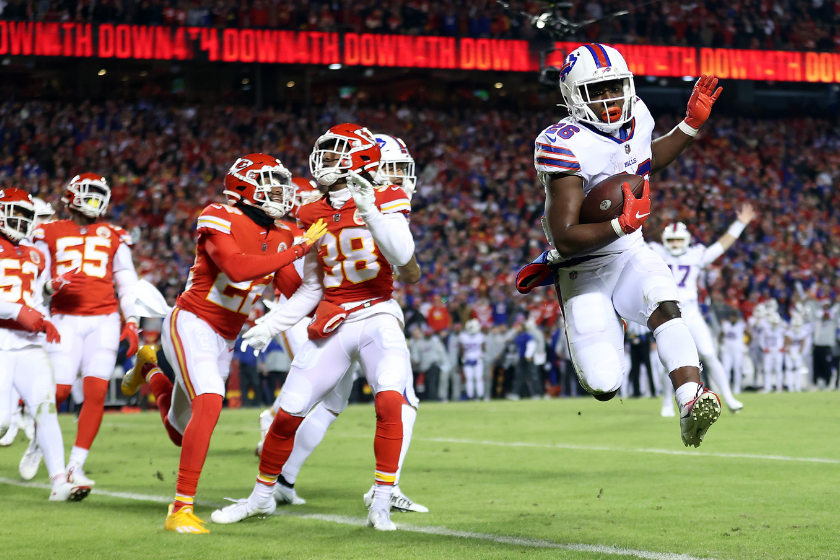 January 23rd, 2022 was a typical wintery day in Kansas City, but the parking lot at Arrowhead was buzzing with tailgaters and anticipation -- the weather never (no, never) deters Chiefs fans from tailgating. Fans had no idea they were in for one of the greatest rides in divisional playoff history -- arguably ever.

The game of the year was an electric back and forth between the two young quarterbacks and it never let up. There were five lead changes in this game, tying for the fifth most in playoff history. Josh Allen threw for 4 touchdowns and 329 yards and Patrick Mahomes threw for 3 touchdowns and 378 yards. Astonishingly, those aren't the most impressive stats from the game. Mahomes and Allen put up a shocking 25 points in the final two minutes of the fourth quarter. Yes, you read that correctly -- in the final two minutes.

Down 26-21 and struggling against the deafening fans in the stadium, Allen was able to drive the Bills down the field -- doing a lot of the running himself -- and score with only 1:54 remaining.  With Buffalo suddenly up 27-26, Kansas City had under a minute to make a comeback. The Chiefs answered the call as Mahomes launched it to Kelce and drove down the field, connecting with Hill from an insane 64 yards to score a touchdown with only a minute to go. Arrowhead went absolutely nuts, feeling like Kansas City had just solidified the win.

The Chiefs were now up 33-29 as Josh Allen and the Bills took the field, all Kansas City had to do was hold them. But Josh Allen's offense couldn't be contained by Kansas City's D and the Bills marched down the field to score another touchdown, leaving a mere 13 seconds on the clock. The Bills had just sucked all the air out of Arrowhead. Things looked grim. That was it, the Chiefs season was over -- or was it.

When It's Grim, Be The Grim Reaper 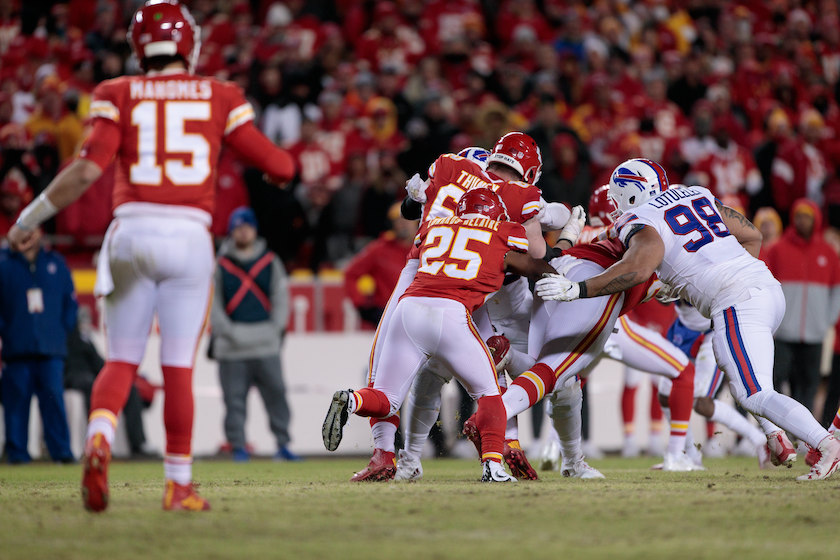 Patrick Mahomes led Kansas City's offense back onto the field down by three with only :13 on the clock -- and did the unthinkable. After connecting with Hill and Kelce down the middle, the Chiefs found themselves within field goal range. They were now looking to their veteran kicker, Harrison Butker, to attempt a 49-yarder and force overtime.

Butker managed to successfully kick in those final three seconds, tying the game up 36-36. A playoff game that had already caused every Kansas City and Buffalo fan to lose their voice was officially headed into overtime. Mahomes had done something unlikely -- in only 13 seconds.

Where does the ice in Mahomes veins come from? When asked if he said anything to his star quarterback before he headed back onto the field hoping to mount a comeback, Coach Andy Reid shared his advice, "When it's grim, be the Grim Reaper."

Mahomes clearly took Coach Reid's advice to heart and those now legendary thirteen seconds steered the Chiefs to a win in overtime -- killing the Bills season. Mahomes was in fact the Grim Reaper. 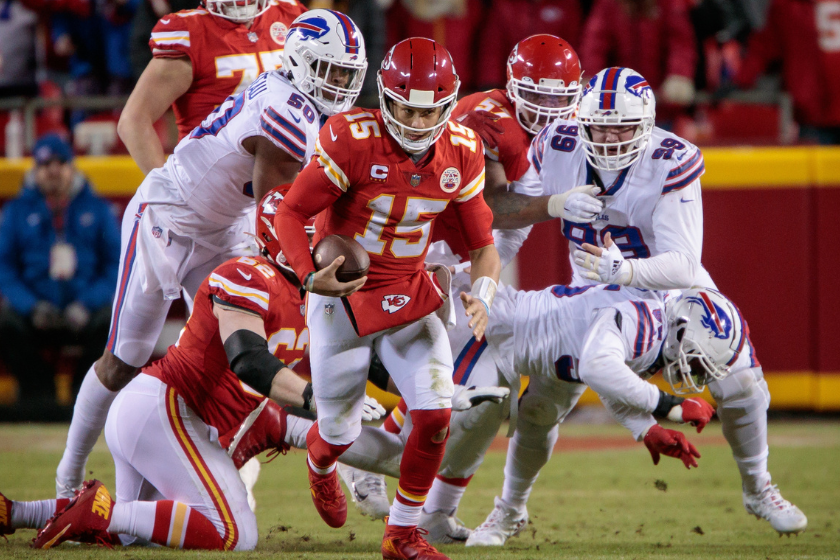 The Chiefs had pulled off a comeback for the ages, but now they had to deliver in overtime and while their offense had been firing on all cylinders, their defense had been hit or miss. Fans across the country were shooting prayers up to the football gods, 'Please win the coin toss. Please win the coin toss.' The coin went up and down as we all held our breaths -- Kansas City had won and elected to receive.

Now, here's where the debate gets heated. Some might say Kansas City won the game because they won the toss. It wasn't that long ago, 2019, that many Kansas City fans were enthusiastically complaining about the NFL overtime rules due to their infuriating loss to Tom Brady and the Patriots in the AFC Championship Game. It's a recurring debate over the fairness of an overtime system that allows a team to win or lose the game without ever receiving the ball.

As a die-hard defense aficionado I feel torn over the idea that it's unfair. Defenses win football games and in overtime, should you lose the flip, the only way to ensure you get possession is to excel defensively. And according to NFL research on the likelihood of losing the game if you lose the coin flip -- it's only a slight advantage (52.8%) and there are obviously a million other immeasurable contributing factors.

However, the league did finally change the rule for postseason overtime play. They found the advantage to be much greater in the postseason, so now both teams are assured possession.

In a league stacked with legend status arms, this feels like a good move for both the fandoms and teams. Although I still believe, and I know I'm not alone, that if you want to win close games, you have to be able to deliver on both ends of the football field -- no excuses.

So Bills fans can talk about losing that overtime coin flip as much as they want, but nothing changes the fact that they were the No. 1 ranked pass defense. And the No. 1 ranked defense should have been able to get the job done -- either in regulation, overtime, or a measly 13 seconds. 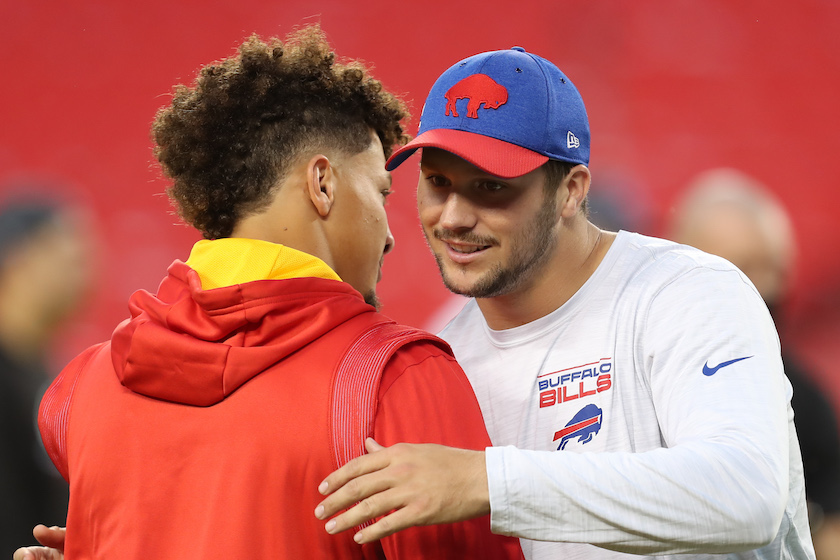 Buffalo wants revenge. Nothing would taste sweeter than parading into Arrowhead and stealing a win. The Chiefs want to silence the haters and secure their rightful place at the top. There are a sea of Bills fans challenging their last win against Buffalo -- but, but but, the coin flip.

Despite Kansas City being fan favorites only three years ago, the newly declared dynasty has grown tiresome to many NFL fans. Call it jealousy, frustration, or just plain 'ole hate for the sake of hating -- I think it's the latter. Chiefs fans would love to remind the league why so many fell in love with the franchise to begin with.

The exhilarating 2022 Playoff drama helped set the stage for the birth of a perfect NFL rivalry. There's so much to love about these two teams facing each other: Bills Mafia vs. Chiefs Kingdom, Buffalo Wings vs. BBQ, Allen vs. Mahomes.

You can cheer for Stefon Diggs and the Bills arsenal or root for Travis Kelce and the Chiefs weaponry. There'll be entertainment from Von Miller and Greg Rousseau's sack attack and high-octane execution from L'Jarius Sneed, Chris Jones and Nick Bolton's pressure. It's a smorgasbord of football excellence.

This may be a rivalry forged in divisional playoff battle, but it's now kept alive by AFC dominance. This game could grow to be the dealbreaker when it comes to deciding the artery to the Super Bowl. Kansas City would love to remind everyone that the road to the Super Bowl goes through Kansas City, as it has for the past 4 seasons. The Bills would love to end the Chiefs hosting run and bring the AFC Championship game to Buffalo.

So, we look to this Week 6 AFC dogfight for football fandom fuel. The Buffalo Bills and Kansas City Chiefs are guaranteed to give us nail-biting inspired action. In a season with mundane match-ups we can count on these two commanding teams to fire-up the fanbase with must-see NFL football. Lucky for us, with two young leaders like Patrick Mahomes and Josh Allen, this is an AFC rivalry we'll be indulging in for many seasons to come -- and the athletes know it. As the star quarterbacks embraced after the divisional playoff showstopper, Mahomes said it himself, "We're going to do this a lot, man." -- and boy oh boy are we the fans grateful.

MORE: NFL Overtime Rules: Explaining How It Works (And Why They're Dumb)