It's the stuff legendary football films are made of: An icon, record breaking quarterback, arguably the GOAT, nearing the end of his career vs. the explosive young star who is poised as the future of the NFL and a soon-to-be Hall of Famer. You couldn't write a better rivalry or "passing of the torch" tale.

One has played for 23 seasons, winning a record seven Super Bowls, playing consistently at an unparalleled high level -- he's grown to be hated. The other came out explosive in his record-setting MVP 2018 full-season debut, a video-game quarterback in real life -- he's already faced haters in his first seven seasons in the NFL. One is beloved by New England and Tampa Bay, the other has quickly risen to Kansas City hero status. Both have drawn in fans across the country, and world, with their unbelievable arms and competitive spirits.

Tampa Bay Buccaneer Tom Brady and Kansas City Chief Patrick Mahomes continue to wow fans with 'I can't believe he did that' plays. They've given the NFL historic storylines and by the looks of it there's no sign of either quarterback slowing down. If quarterbacks could play behind walkers I'm convinced Brady would play until he could no longer stand.  This Sunday night the 45 year-old veteran and 27 year-old newlywed new dad will face off for the sixth time in their careers.

Every Brady and Mahomes Matchup Ever 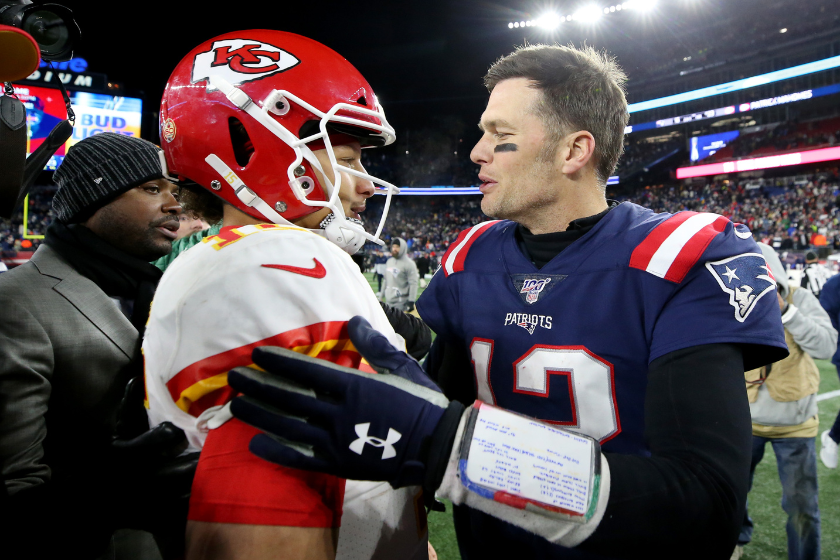 Sunday night will be the first time Brady and Mahomes have battled each other since the Chiefs devastatingly ugly loss to Brady and the Buccaneers at Super Bowl 55. Since the NFL stars first meeting back in 2018, the two one-of-a-kind play makers have been the league's two most successful quarterbacks during that time. Mahomes leads the league from 2018-present with 51 victories and Brady follows closely behind with 49 wins.

However in the last five episodes of the always thrilling Brady+Mahomes series, Brady has a slight edge over Mahomes, winning 3/5 of the games. Let's do a quick recap of the first five episodes in this binge-worthy series.

Who can forget this EPIC debut matchup between the two quarterbacks? With an impressive 7 scores in the final 16 minutes, Brady ultimately drove the Pats down the field in the final minutes of the 4th to secure a game winning field goal with mere seconds left on the clock. It was this nail-biting premier meeting that laid the undeniable foundation that any time these two face-off it will always be must-see tv.

Penalties. Overtime. Coin flip. Frigid temps. If you want to see a Kansas City Chiefs fan have an immediate physical reaction, mention this soul-crushing AFC Championship Game, the Chiefs first AFC Championship Game in 25 years. After the electricity of their first meeting earlier in the season, many expected this rematch for the AFC Championship title -- and it did not disappoint. A relentless back and forth the entire game ended in shocking fashion for Chiefs fans. Brady halted the magical season ride for Kansas City, but the legendary Patriot made sure to visit the Chiefs locker room after Mahomes heartbreaking loss, to pass on words of encouragement and support to the young quarterback. It was clear the Brady vs. Mahomes meetings were a symbol of one of the greatest ever passing the baton to the future face of the NFL.

Kansas City finally tasted victory over Brady and in dominant fashion. After Hardman's touchdown in the 2nd quarter, the Patriots never regained the lead. In the final minutes of the game, as Brady marched down the field, and personally ran for first-downs, it looked like New England might tie the game. The Chiefs defense had other plans, stepping up to help Kansas City secure their first win in the now infamous Brady vs. Mahomes meetings. The Chiefs went on to win Super Bowl 54 this season, the franchise's first Super Bowl win in 50 years -- yes, 50 long years for fans.

The Chiefs had one goal this season -- run it back, baby. Facing Brady for the first time as a Buccaneer and heading into half-time up 20-7, the Chiefs felt confident they could beat Brady's new team, Tampa Bay. But, if this matchup has taught us anything, it's to never count out either gunslinger. Brady is always gonna Brady, and these two quarterbacks gave us another awe-inspiring back and forth battle. In the end Kansas City's attack helped secure them their second win against Brady and set the stage for what felt like a destined Super Bowl 55 matchup.

Brady threw for 201 yards and 3 TD, playing on his home field at Raymond James Stadium and was named Super Bowl MVP for a record 5th time.

Running it back is challenging, exhausting and both physically and mentally demanding. You've got to stay healthy and stay locked in. It's no wonder only seven franchises have accomplished the feat. Brady's New England Patriots being one of the six teams to reach back-to-back legend status. The Chiefs sadly did not add themselves to the illustrious six this season. In fact, the Chiefs looked abysmal facing Brady on Tampa Bay's home turf. The pressure from the Buccaneers defense frustratingly halted Kansas City's offense over and over again. It appeared the addicting Brady vs. Mahomes series would be coming to an end with a season finale securing Brady's legacy in the NFL with a Super Bowl win sized exclamation point. Brady's career would conclude with a story book ending. Or would it? 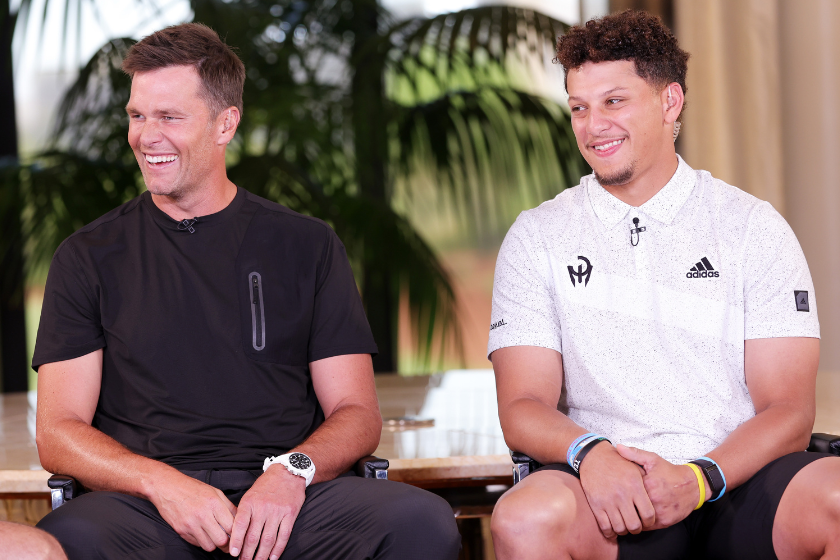 Photo by Carmen Mandato/Getty Images for The Match

RELATED: Why Does Patrick Mahomes Love Ketchup So Much?

Brady decided to change the exclamation point on his series ending with Mahomes to an ellipsis and added a 'to be continued...' to the rolling credits of their fifth meeting. So here we are, the lucky fans, with another opportunity to revel in the talent of Tom Brady and Patrick Mahomes. Both quarterbacks are coming off of Week 3 losses, Kansas City (2-1) to the Colts and Tampa Bay (2-1) to the Packers.

The very real drama of Hurricane Ian added another element to this week's anticipation for the match-up. For a while it looked as if the Buccaneers wouldn't be hosting the Chiefs in Tampa Bay at all. The Bucs were evacuated from their city due to Hurricane Ian and players were practicing in Miami. The NFL had a contingency plan to hold the Sunday night game at U.S. Bank Stadium in Minneapolis, but ultimately are able to hold Sunday Night Football in Florida.

"Our thoughts and prayers remain with the many thousands in the Southwest Florida region who have been severely impacted by Hurricane Ian," the Bucs said in a statement Thursday. "We are also very thankful that the Tampa Bay area was spared the most damaging consequences of this powerful storm."

"We have informed the NFL, after consulting with local and state agencies, that we are ready to play Sunday night's game against the Kansas City Chiefs at Raymond James Stadium as originally scheduled."

Can Mahomes lead the Chiefs to a victory against Tampa Bay? A Chiefs win would tie up the Brady vs. Mahomes series 3-3. Or will Tom Brady pull a Tom Brady and secure another win on his road to one more Super Bowl win? One thing is certain: we should celebrate the opportunity to witness these two battling it out on the field again. Who knows if it's the last time we'll see it? With these two, you can never really know.

To help support people affected by Hurricane Ian, please visit www.redcross.org/nfl or text the word IAN to 90999 to make a $10 donation and help those in need.