The picture is infamous. A mugshot of the Michigan quarterback with his shirt off, wearing only baggy gray athletic shorts, standing stands next to an easel with his name on it. A future NFL superstar posing in front of the same blue background most of us have in our sixth-grade class photos.

From the photo alone, you could tell this man was not going to be a first-round pick. Far from it, actually.

Nowadays, this picture is pulled out to remind us to expect the unexpected. This scrawny, unimpressive-looking quarterback would turn out to be one of the greatest players in NFL history.

In 2000, however, the picture told the whole story. Because Tom Brady had one of the worst NFL scouting combine performances in the history of the event. 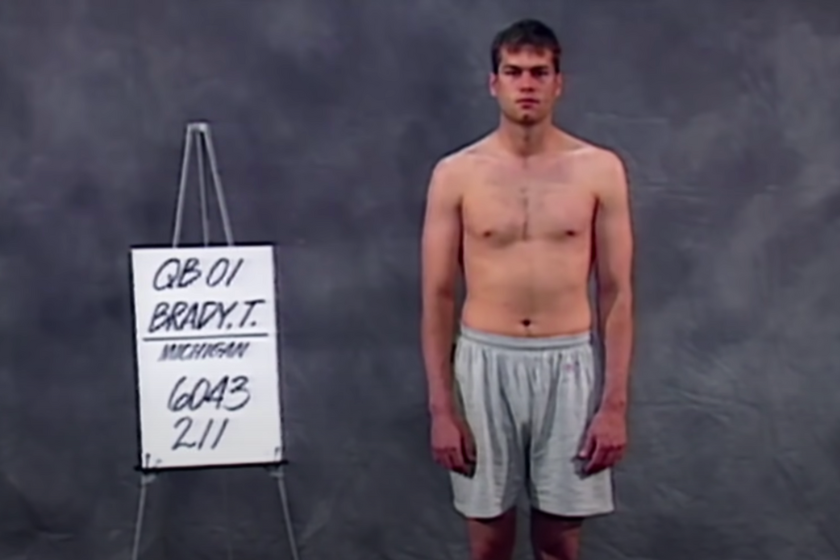 But I'm not sure if people appreciate just how bad Brady's combine numbers are.

Brady's first professional football visit to Indianapolis began with a 5.28-second 40-yard dash, one of the slowest times recorded for quarterbacks of Brady's ilk. TB12's 40-yard time feels like an eternity when you consider that some of his peers were around half a second faster. Kansas City Chiefs QB Patrick Mahomes and Hall of Fame SNL Star Peyton Manning both ran a 4.80 40-yard dash in their respective combines. Other great QBs like Drew Brees (4.83) and Aaron Rodgers (4.71) are not even known as mobile quarterbacks, but they both got under 5.00 seconds. Even less mobile quarterbacks, including Tony Romo (5.01 seconds), Philip Rivers (5.08 seconds) and Nick Foles (5.14 seconds) all still finished better than Brady.

In fact, Brady's 40-yard dash is the fourth-worst time among all quarterbacks. Only Ryan Mallett, Toby Korrodi and Chris Redman, all tied at 5.37 seconds, were slower than the Hall of Fame QB. We know what happened to Mallett, who played behind Brady before flaming out in Houston. Chris Redman was taken in the third round by the Ravens, one of six drafted ahead of Brady in 2000. He bounced around practice squads, finishing his career with a 79.4 QB rating. Korrodi became an undrafted free agent and never played an NFL snap.

Still, when you think about how his career started and how it ended, Tom Brady almost has as many Lombardi trophies as he does seconds in his 40-yard time.

Brady's three-cone drill, shuttle, 20-yard dash and 10-yard dash were no more impressive than his 40-yard dash. That's to be expected considering that wide receivers and other fleet-footed position players excel in those events. But Brady's jumping workouts? Those should have been way better than they were.

Korrodi, who is considered to have the worst overall combine performance by a quarterback, had a 25-inch vertical jump. Tom Brady's vertical jump was just 24.5 inches.

Maybe the Pats legend is better at jumping forward rather than up, you say? Nope.

In recent combines, Eagles QB Jalen Hurts was the top broad jumper among quarterbacks in 2020, with a 10'5" jump, with Justin Herbert coming in just behind at 10'3".

Even Brady, who is known for being a master of the mental part of football, did not wow with his Wonderlic score. Brady's score of 33 is not a bad score, per se, but doesn't come close to the top of the quarterback rankings, either of current or all-time signal-callers.

Of course, Ryan Fitzpatrick turned his Harvard education into a score of 48 out of 50, while Brady also falls behind the Giants' two-time Super Bowl-winning QB Eli Manning (39), as well as Matt Stafford (38), Josh Allen (37), Ryan Tannehill (34) and Joe Burrow (33). At least Brady didn't pull a Vince Young and score a 6 on the infamous test. Still, Young was NFL Rookie of the Year in 2006 for the Titans, and that's one award that Brady can never boast winning.

How Did Brady's Combine Performance Affect His Draft Stock? 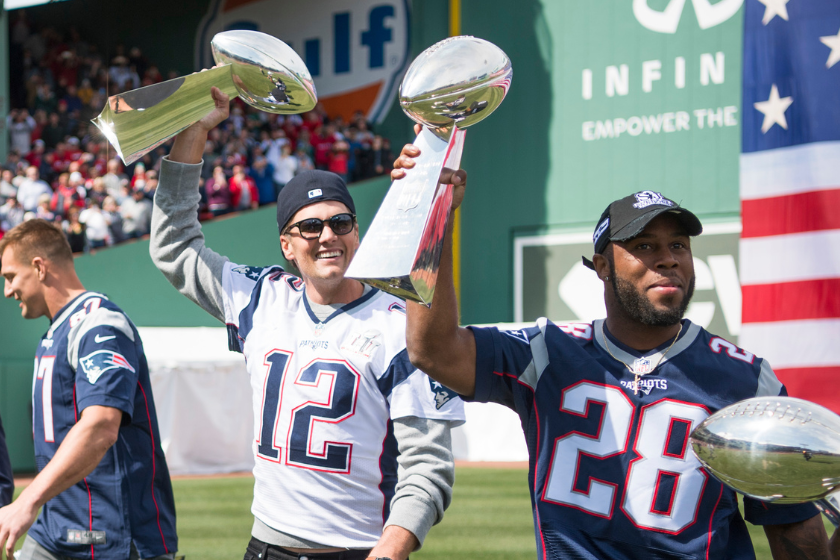 Clearly, the measurables themselves don't prove anything. Brady, despite having some of the worst combine numbers of any quarterback ever, became the greatest quarterback ever by outworking his peers for more than two decades, in New England and then with the Tampa Bay Buccaneers.

But had Brady done better at the combine, he might have been drafted earlier and landed in a different situation. That might have meant that he never got a chance to seize a starting job and face the Rams two years later in his first Super Bowl. On the other hand, maybe Brady would have been thrown to the wolves too early and failed due to high expectations and a short learning curve.

Most likely, however, a better NFL Combine for Brady would have meant that he would not have been passed over by so many teams, and would not have embarked on a 20-plus year revenge tour to prove everyone wrong. Looking at his Combine numbers, it's easy to see why Bill Belichick was able to draft the perennial Pro Bowl QB with a sixth round pick in the 2000 NFL Draft.

It's clear now, after watching the current Bucs signal-caller and all-time NFL leader in passing touchdowns, passing yards and wins by a QB devour NFL teams like the Jets, Colts, Seahawks, Panthers and Lions, that combine stats don't tell the whole story, and neither do the photos.

The moral of the story? A bad NFL Combine performance can still lead to six Super Bowl rings. Nowadays, Patriots fans are hoping Mac Jones can find some of that Brady magic as the former college football star attempts to get New England back into the playoffs and Bucs fans are hoping the NFC star can return to his previous form of being a walking ESPN highlight and social media sensation.

This article was originally published on March 5, 2022, and has been updated since.