NFL Combine Records Prove to Be More Footnote than Foreshadowing 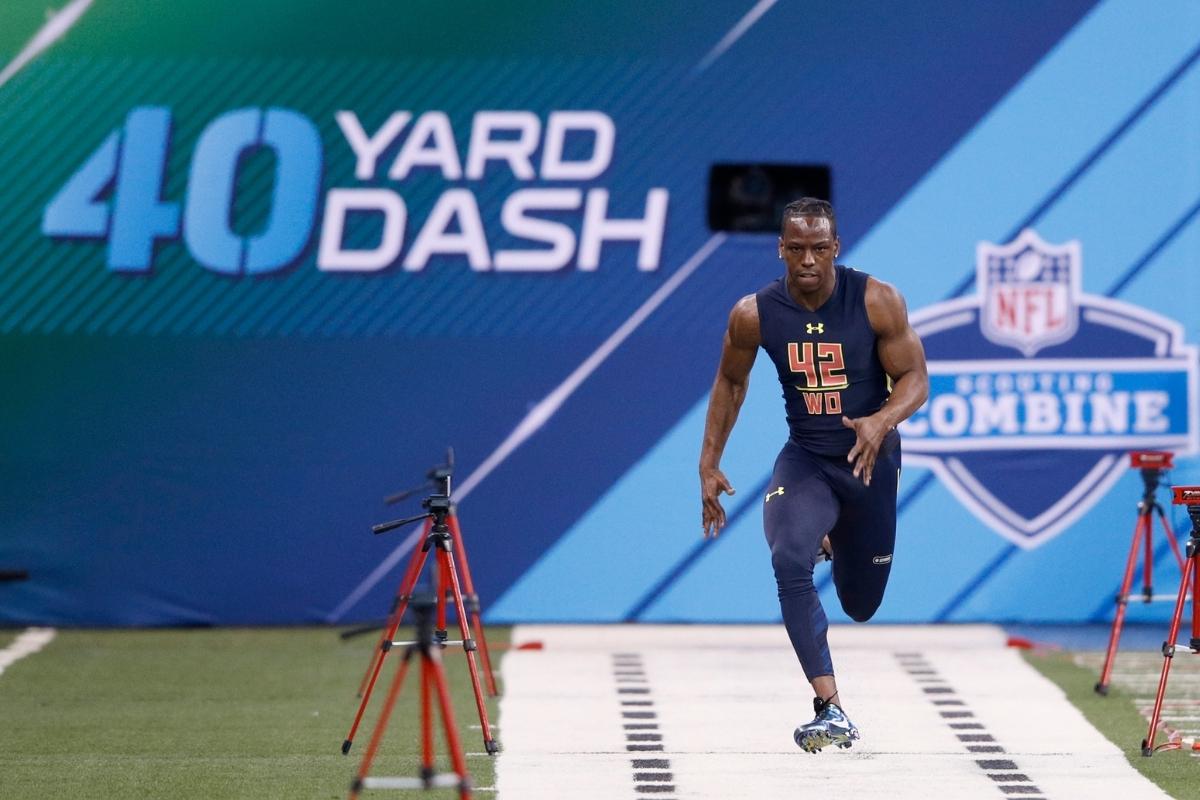 Every March, hundreds of NFL hopefuls gather in Indianapolis for the annual NFL Scouting Combine, where college football players hoping to be drafted will be evaluated physically, mentally and medically by their 32 prospective employers.

While the NFL Combine makes for great fodder for the football talking heads, there has been much debate over the years about how much one’s performance at the combine really affects their draft stock. With so much video to use for scouting college players and a myriad of Senior Bowls and individual pro days, how much weight does the NFL combine still carry?

In addition, many Combine critics claim that the tests players are put through are archaic, random and out of context from actual football skills. Does the three-cone drill or the 40-yard dash really predict how can’t-miss a prospect is? Or is it just a crutch used to justify the opinions already formed by teams, fans and pundits? After all, we’ve all seen Tom Brady’s NFL Combine photo, and his GOAT status is undisputed.

Of course, it helps to do well in your NFL Combine workout. But what about those who are the best ever? Do the (unofficial) record holders in each Combine event immediately shoot up draft boards? Do they fare as well in the league?

Full list of players to run a faster 40-yard dash at the combine than John Ross:pic.twitter.com/3T0TYhDAXo

RELATED: DK Metcalf’s 40 Time Shouldn’t Be Possible at His Size

The 40-yard dash is the most well-known event at the Combine, thanks in part to the history surrounding some of the NFL’s speediest running backs and, in recent years, members of the media getting in on the fun. But for prospective NFL hopefuls, running a record-breaking 40-yard dash can mean big bucks in the NFL.

Already a top wide receiver prospect coming out of the University of Washington, John Ross ran the 40-yard dash so quickly during his Combine workout that he suffered a strained calf and had to bail out of some of the other drills. Whether it was because of his blazing speed or that he played in a youth league where he was coached by Snoop Dogg, the Cincinnati Bengals drafted Ross in the first round of the 2017 draft, with the 9th overall pick.

Despite having the fastest 40-yard dash record, Ross had about one and a half seasons as a productive wide receiver. After fumbling his first professional touch, he rode the pine through his rookie season. He caught seven touchdowns in 2018, but a shoulder injury derailed a potential breakout 2019 campaign. He requested a trade in 2020 and spent time on IR again before signing a one-year deal with the Giants in 2021, where he started the season on IR.

Unfortunately, the putting up the fastest 40-yard dash time ever recorded only translates to football success if you can stay on the field, which was a struggle for Ross. However, for others like Chris Johnson, the NFL Combine hype became real, and then some.

The average NFL Combine participant puts up 20 reps on the bench press, but this can vary based on position. Defensive backs and wideouts tend to have lower totals than their counterparts on the defensive and offensive lines. That’s why it’s no surprise to see defensive tackle Justin Ernest as the NFL Combine bench press record holder.

Ernest went undrafted in the 1999 draft after struggling with injuries during his senior season at FCS Eastern Kentucky University. He was signed as a free agent to the practice squad of the New Orleans Saints but never made it on the roster for a regular-season game. Ernest was out of the league after one year on the practice squad. So much for holding the NFL Combine bench press record. In recent years others like Stephen Paea and Mike Kudla have come close to breaking the record but failed to reach that elusive 51st repetition.

Sensabaugh was a fifth-round pick and played for Jacksonville for four years. When his rookie deal expired, he was not resigned by the Jaguars, possibly because of legal issues, having been arrested three times during his NFL career.

The Dallas Cowboys didn’t seem to let his personal conduct issues deter them, and they brought him in before the 2009 season, first on a one-year deal. Sensabaugh had a productive career in Dallas, playing nearly every game for four seasons before being released in 2013 to save cap space. Though his vertical jump was indeed an asset on the field, it didn’t help him in this post-football political career, as he made an unsuccessful bid for mayor in Sullivan County, Tennessee in 2018 and placed 8th in a field of nine candidates for alderman in Kingsport, Tennessee in 2021.

Five years ago today, Byron Jones set a world record in the broad jump at the combine. His jump of 12-3 is still 6 inches better than the second-best mark ever recorded at the combine:

Byron Jones impressed potential future employers at the 2015 NFL Combine. He also set a world record for standing broad jump, crushing the old record (11’7″) held by Jamie Collins. In this case, his Combine performance did give him a huge boost. The 25th best cornerback prospect before the Combine, he was the fourth cornerback selected when the Cowboys called his name at No. 27 in 2015.

Maybe it’s not all because of his broad jump ability, but Jones has been one of the league’s best (and subsequently highest-paid) cornerbacks. He was a Pro Bowler in 2018 with the Cowboys and in 2020 signed a five-year, $82 million contract with the Dolphins, of which he has three seasons remaining.

Jason Allen and Brandin Cooks are technically tied for this record. Both were a pair of first-round picks, with Allen going 16th to the Miami Dolphins in 2006 and Cooks taken 20th by the Saints, who traded up to get him. Of course, the 20-yard shuttle meant that these guys were fast and agile, with good stop-and-start ability. Allen was a defensive back who played six years in the league and had 15 interceptions, while Cooks has been with the Saints, Patriots, Rams and Texans since 2014 and has caught 573 passes for nearly 8,000 yards and 48 touchdowns.

Thomas went undrafted, and I can find no record of him even getting a sniff with an NFL team’s practice squad or playing in another pro football league. He continues to list himself as the NFL Combine 3-Cone Record holder on his Instagram, but that seems like it was the end of the line for the DB out of Oklahoma.

Though I had never heard of him, Gibson owns a Super Bowl ring from his first year with the Eagles, who took him in the fifth round in 2017. Gibson played one snap in the Eagles’ win over the Patriots. Though he spent three years in Philly, he never made it off the practice squad anywhere else. In 20 career games, he caught three passes for 59 yards and no touchdowns.

McInally is the only known player to score a perfect 50 on the Wonderlic test. A combo wide receiver/punter out of Harvard, McInally was drafted in the fifth round by the Cincinnati Bengals. This was not really a reach for McInally, who was second in the nation in receiving as a junior with the Crimson. He was All-Pro in 1981 and punted 700 times over his 10-year career with the Bengals.

No surprise that after his college football career was over, he would go on to be an entrepreneur, founding several foundations and collecting and selling rare children’s books. In 2006, he became the director of marketing and testing for the Wonderlic Company. Pay it forward, Pat.

Aside from Byron Jones, I don’t think these record-breaking performances boosted the stock of these draft hopefuls. It serves as a footnote for most, a piece of trivia that will win you a bar bet. It continues to be the crowning achievement of a career that never quite panned out for some.