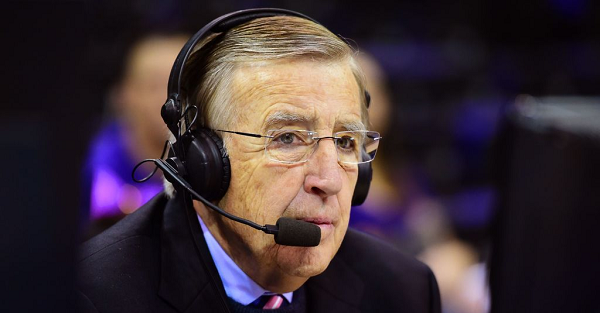 Monday night was one of the most brutal NFL games in recent memory.

Two players were carried off the field on carts and a slew of personal fouls resulted in a yellow flag-ridden field. As plenty of analysts called out both Pittsburgh Steelers and Cincinnati Bengals players for their actions, former ESPN broadcaster Brent Musberger took aim the “snowflakes” upset by the NFL’s brutality:

Yo,Snowflakes. Quit preaching. The Violent World of Sam Huff sold NFL football to the masses. The Dallas Cowboy cheerleaders gave us a little sex with our violence. Deal with it!

In what turned out to be a game riddled with injuries and illegal hits, Smith-Schuster picked up his suspension after making unnecessary contact against a player who was in a defenseless posture, according to the release. Smith-Schuster lined up a defender and delivered a violent and unnecessary blindside shot to the head of Vontaze Burfict. He was then seen taunting Burfict after the hit.

Iloka received his suspension after delivering a shot to the head and neck area of Antonio Brown. The league said in the statement that he violated the rule which prohibits hitting a defenseless player’s head or neck area with the helmet, facemask, forearm or shoulder.

Speculation began Tuesday morning if the two players would receive suspensions for their actions and the league decided to sit each player down for one game. As the league continues in an attempt to clean up the sport, hits like these won’t be tolerated and the league will continue to take a stand.

As for Musberger, apparently he’ll keep living in the days where fans lacked player concern and enjoyed a little “sex” with their violence.