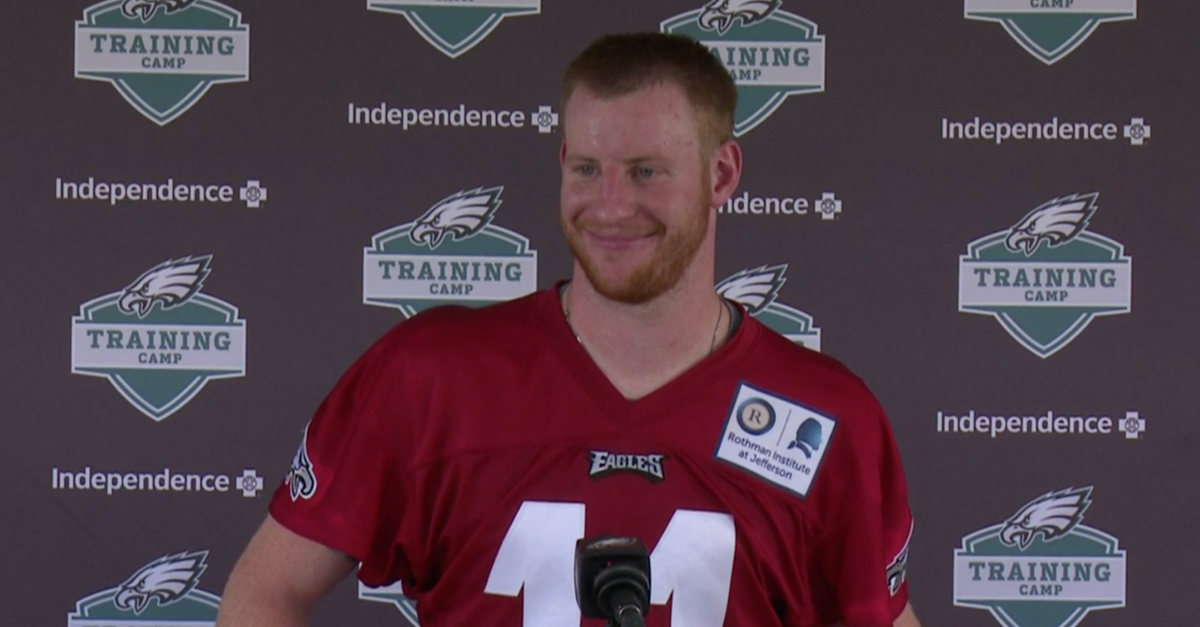 Eagles quarterback Carson Wentz added another ring to his collection and tied the knot over the summer with longtime girlfriend Madison Oberg. After a Super Bowl win, a near MVP season and a wedding, no one has it as good as the 25-year-old Eagles’ superstar.

The mood entering the first day of Philadelphia Eagles‘ training camp was light — Veterans get back into the swing of things as rookies figure their way around, but Wentz, coming off an a torn ACL, looked particularly spry only a few month removed from left knee surgery.

After practice, Wentz fielded questions from reporters about treatment on his knee and getting comfortable on it, but he couldn’t resist taking a jab when one guy set Wentz up with a joke for the ages.

The reporter asked, “How was the honeymoon as far as rehab?”

Reporter: “How was the honeymoon as far as rehab?”

Did they teach him that in Bismarck, North Dakota?!

Wentz is developing into the next face of the NFL. An avid outdoorsman who does all the right things, Wentz won five FCS championships playing for North Dakota State Bison, and the Eagles selected him second overall in the 2016 NFL Draft.

In only two seasons, Wentz is a leading MVP candidate for 2018, already has a Super Bowl ring on his finger and has the city of Philadelphia in the palm of his hand.

Nothing is going to hold Wentz back from having a little fun this summer.

Skepticism that Wentz may have to start the year on the Physically Unable to Perform list was squashed immediately. On day one of training camp, Wentz sprinted out onto the field and even practiced in 11-on-11 drills in a limited capacity.

Eagles head coach Doug Pederson said of Wentz’s first practice, “I’m not going to push him or get him out there sooner than he has to, and I wanna make sure that he’s 100 percent. You know, he looked good today and we’re just going to continue to progress.”

Wentz and Super Bowl MVP Nick Foles will split reps during the early part of training camp until Wentz is ready to take over the team once the season starts.

The Eagles begin their title defense September 6 when they kick off the regular season hosting the Atlanta Falcons at Lincoln Financial Field.

Expect Wentz to be ready to go after all those grueling honeymoon workouts.