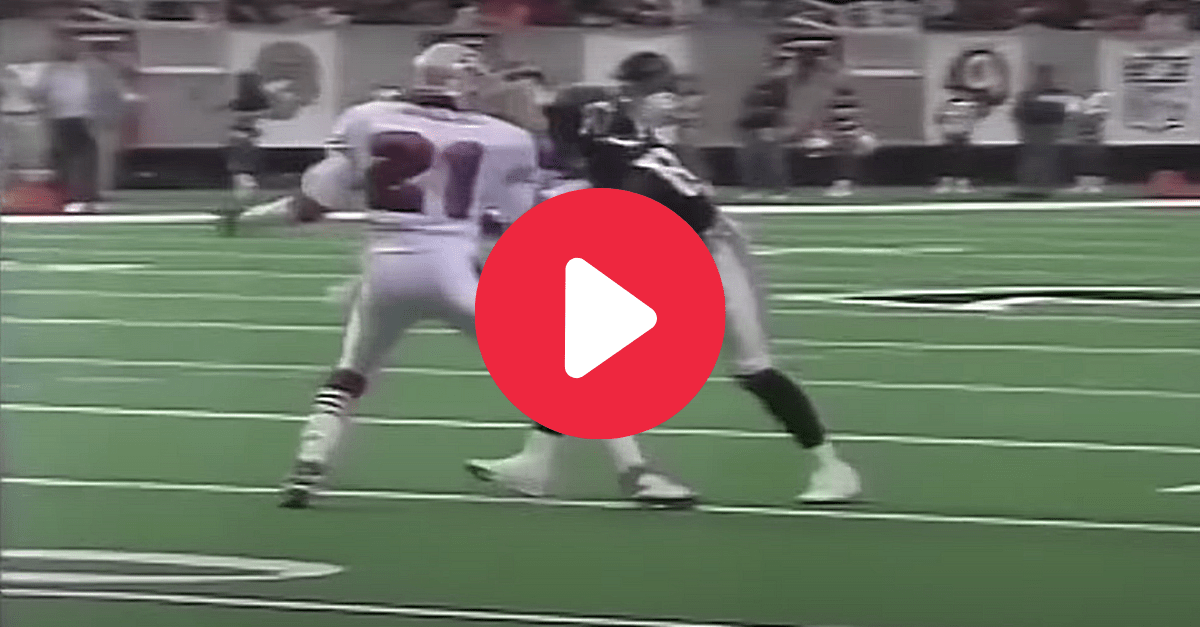 Richard Sherman vs. Michael Crabtree lived up to the hype. Andre Johnson vs. Cortland Finnegan became a brutal fist-firing free-for-all on the gridiron. Odell Beckham Jr. vs. Josh Norman was a trash-talk-a-palooza. A.J. Green vs. Jalen Ramsey brought the WWE ring to the football field.

Those are just a few of the best wide receiver-defensive back fights, scuffles and beefs of all time. There’s just something about watching two of the best at their positions literally go head-to-head. Maybe it’s because they’re out on their own island most of the time, but these two positions are especially fun to watch duke it out.

Deion Sanders and Andre Rison were no exception.

When the San Francisco 49ers cornerback and the Atlanta Falcons wide receiver — who were former teammates in Atlanta from 1990-93 — battled in Prime Time’s return to the Georgia Dome in 1994 after signing with the Niners, all hell broke loose.

The Deion Sanders vs Andre Rison beef never gets old. Imagine if social media existed back then 😂 | #49ers pic.twitter.com/3u9OxVfiTK

Everyone knows Deion Sanders could trash talk anyone into a coffin. The former Florida State star and fifth-overall pick in the 1989 NFL Draft had a certain swagger that few in NFL history had and he backed it up with his play.

The lead-up to Sanders’ return to Atlanta for the 49ers-Falcons game in 1994 didn’t disappoint.

“If it’s possible I would love everyone else to get off the field so we can just at it one on one,” Deion told reporters before it.

“I never said anything derogatory towards Deion, and if he has a personal vendetta against me or a problem with me, the hell with him. If he wants to go one on one, we can go one on one all g*dd*mn day,” Rison responded.

Oh, they sure as heck went one on one all right. Their matchup turned into a punching slugfest, as Deion threw multiple left hooks at Rison’s helmet during one play.

Deion Sanders definitely got the last laugh. He housed a Jeff George interception for a touchdown and danced his way into the end zone in front of an Atlanta sideline that used to love him.

After 5 seasons as a Falcon, Deion Sanders migrated to the SF via free agency in 1994. In his first return trip to Atlanta, Deion:

The 49ers won the game, 42-3, and Sanders won the 1994 NFL Defensive Player of the Year. He’d go on to win a Super Bowl that year with the team before signing with the Dallas Cowboys the following year and finishing his Pro Football Hall of Fame career with the Washington Redskins and Baltimore Ravens.

Rison had a much worse 1994. The five-time Pro Bowl receiver’s mansion was burnt down by girlfriend and TLC member Lisa “Left Eye” Lopes.

Both Sanders and Rison were fined at least $4,000 for fighting on the field, but one coach thought Deion should’ve been thrown out.

“I looked at the film,” then-Falcon Coach June Jones told the New York Times in 1994. “I thought he should have been thrown out. I know we punched guys here last year and our guys got thrown out of the game. I thought with something flagrant like that he would be ejected.”

Ejecting Deion Sanders probably wouldn’t have made much of a difference in the blowout. But we would’ve never got the ensuing pick-six, so maybe it’s a good thing referees allowed him to play.