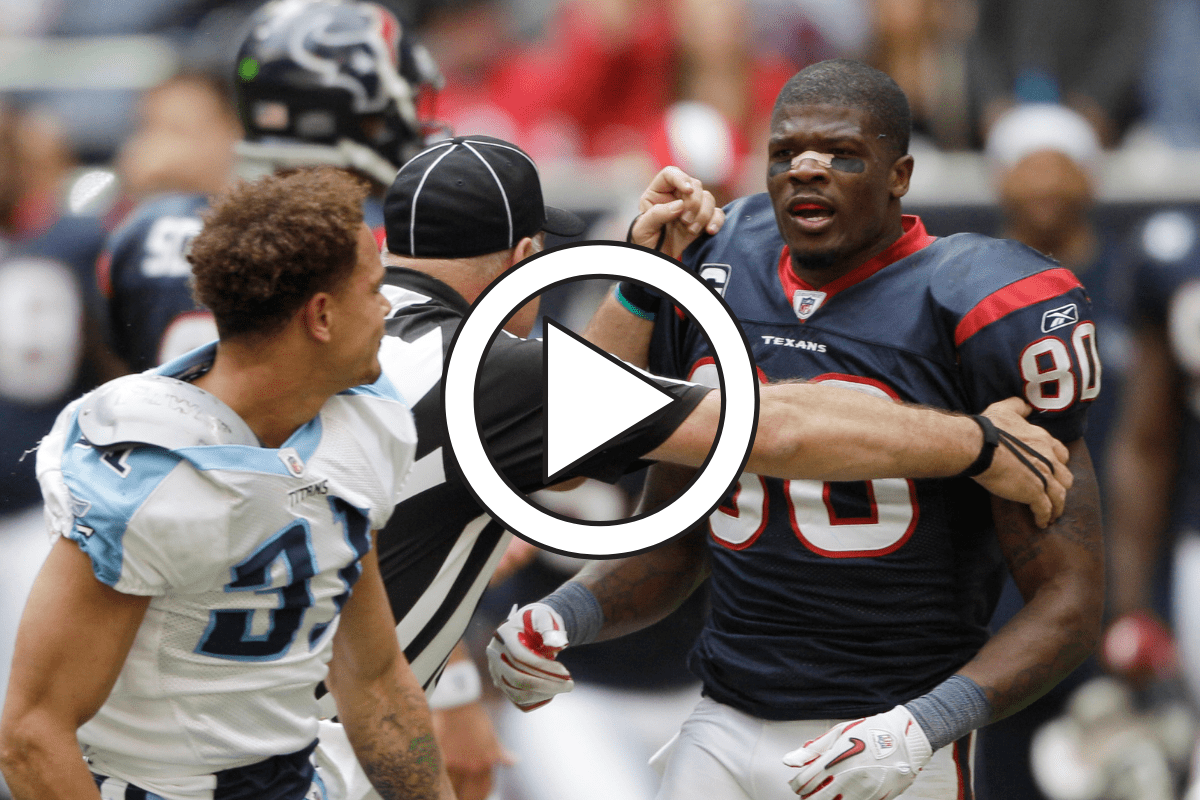 I remember a teammate growing up with a bad temper. We all know someone like this, but this kid REALLY couldn’t keep his cool. A random football practice would turn ugly as he’d pout, whine, and start a wrestling match just because he felt like it. But I’ll never forget what our coach ? the late, great Dave Carnahan ? said to him in his raspy, hoarse coach’s voice.

“Hey, dumbass. Why in the hell would you punch someone with a helmet on?”

Every time I see a fight break out in football, Coach Carnahan’s grizzled face pops into my head. When Odell Beckham Jr. and Josh Norman fought each other in Week 15 of the 2015 season, they combined for five personal fouls, multiple jabs and haymakers to each other’s helmets, and a one-game suspension for Beckham.

OBJ and Norman’s slugfest certainly wasn’t the first, nor the last, brawl between fully-padded grown men. And while it was pretty memorable, it was nothing compared to the 2010 season’s showdown for the NFL’s Light Heavyweight Championship of the world.

On this day 4 years ago: Odell Beckham Jr. vs. Josh Norman happened. pic.twitter.com/CrtMbCVZxT

It was Week 12 when the Tennessee Titans traveled to Reliant Stadium to face the Houston Texans. Ultimately, Houston kept their playoff hopes alive, winning 20-0, thanks to its defense allowing only 162 total yards of offense. (Some dude named Rusty Smith made his one-and-only career start at quarterback for the Titans. Yeah, I don’t know who that is either.)

But while Houston picked up a much-needed win against its AFC South rival, the biggest story of the day was Houston’s best player absolutely losing his cool.

Titans cornerback Cortland Finnegan bothered Texans wide receiver Andre Johnson throughout Sunday’s game. After several cheap shots, Johnson, who stood four inches taller and weighed about 40 more pounds, finally erupted in the fourth quarter. The seven-time Pro Bowl selection ripped off Finnegan’s helmet, then had his own torn off, spun the Titan to the ground, and began mashing him on the side of the head.

Both players, as you’d expect, were ejected.

WATCH: The Fastest KO in UFC History Took Only 5 Seconds

Despite the ejection and flagrant nature of their scuffle, neither player was suspended. They were, however, fined $25,000 for unsportsmanlike conduct.

Andre Johnson is one of the most mild-mannered, go-about-his-business players the NFL has ever seen; This was the only time in his 14-year NFL career that he was fined by the league. Pretty impressive considering he nabbed 1,062 catches (11th in NFL history), 14,185 receiving yards (11th in NFL history), and 70 touchdowns. He’s still the only player with 60-plus catches in each of his first eight NFL seasons.

Finnegan, well, his history isn’t so neat and tidy.

Cortland Finnegan and Andre Johnson each received a $25,000 fine for this fight. They did not get suspended. pic.twitter.com/edv8F7mRXw

The seventh-round pick in the 2006 NFL Draft was fined two other times during the 2010 season in addition to his fight with Johnson. The first was a $5,000 ticket for throwing New York Giants receiver Steve Smith to the ground by his helmet. The second bill came for $10,000 after hitting the Broncos’ Chris Kuper after his helmet came off. In 2012, Finnegan was fined $7,875 for grabbing the Packers’ Jordy Nelson by his facemask.

Fights happen, especially when a bunch of alpha males are pumped full of adrenaline and run into each other. But NFL players fighting in full pads? That’s just something I’ll never understand, but damnit if these scuffles aren’t fun to watch over and over and over and over again.