After ejection, NFL rules on further punishment against Jalen Ramsey for fight with AJ Green 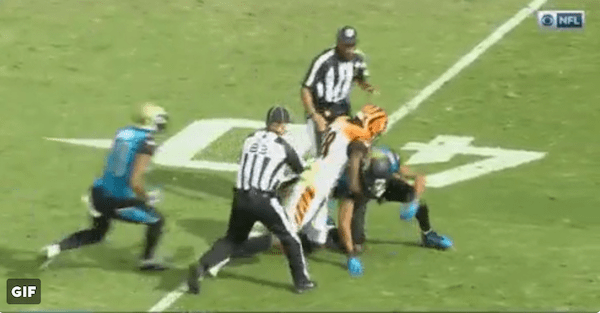 A.J. Green and Jalen Ramsey got into quite the scuffle this past NFL weekend, a fight that ended with both players being ejected.

For his part in the fight — and he certainly played a big role with his rear-naked choke and MMA-like punches — Green was handed down a huge fine by the NFL: $42,000. That was a fine that Green accepted, thus accepting his role in the scuffle.

Ramsey, the Jacksonville Jaguars’ star cornerback, started the scuffle with a big shove and he was apparently jaw-jacking the Bengals’ wideout for much of the game, but according to Michael David Smith of Pro Football Talk, Ramsey won’t be fined by the NFL.

As PFT pointed out, that’s a bit surprising:

That?s a surprising decision, but it likely stems from the fact that Green was the one who was throwing the punches in their fight, while Ramsey did little more than give Green the kind of post-play shove that we see several times in every NFL game. The league felt that Green was to blame for the matter.

Ramsey did reportedly escalate the situation by trying to find Green in the locker room after they fought, but the league apparently didn?t think that should result in a fine, either. So Ramsey got off with nothing more than Sunday?s ejection.

The Jaguars did end up winning 23-7, so it’s not like the loss of Ramsey in the second half was a huge detriment to the team. In fact, an argument can be made that getting Green out of the game was actually the best defense he could have played — through the NFL likely won’t be happy if star defenders start goading their opponents into fights in an effort to get them into the locker room instead of on the field.