New York/New Jersey legend and NFL quarterback Eli Manning officially retired in 2020 but not before giving NFL fans a career's worth of hilarious and memorable moments. The 41-year-old former New York Giants passer won two Super Bowls plus did his best "Dirty Dancing" impression with Odell Beckham Jr. and showed off his wicked rapping skills alongside his brother, Hall of Fame Indianapolis Colts and Denver Broncos QB Peyton Manning, during his 16-year NFL career.

"Easy E" followed in his brother's footsteps at New Orleans' Isidore Newman High School before throwing for more than 10,000 yards in the SEC for the Ole Miss Rebels. The San Diego Chargers selected him first overall in the 2004 NFL Draft and flipped him to the Giants, with whom he'd blossom into a two-time Super Bowl MVP.

Manning lived up to the billing of his last name. His older brother, Peyton Manning, is one of the top three greatest quarterbacks in NFL history. His oldest brother, Cooper Manning, played receiver for the Rebels and had a son, Arch Manning, who looks like the family's next elite passer. Cooper's youngest son Heid is a rising offensive lineman recruit, too. Their father, Archie Manning, was an NFL quarterback himself.

Everyone already knows Eli Manning makes up an important portion of the NFL's First Family, but what about the family he started? Let's meet his wife and four children. 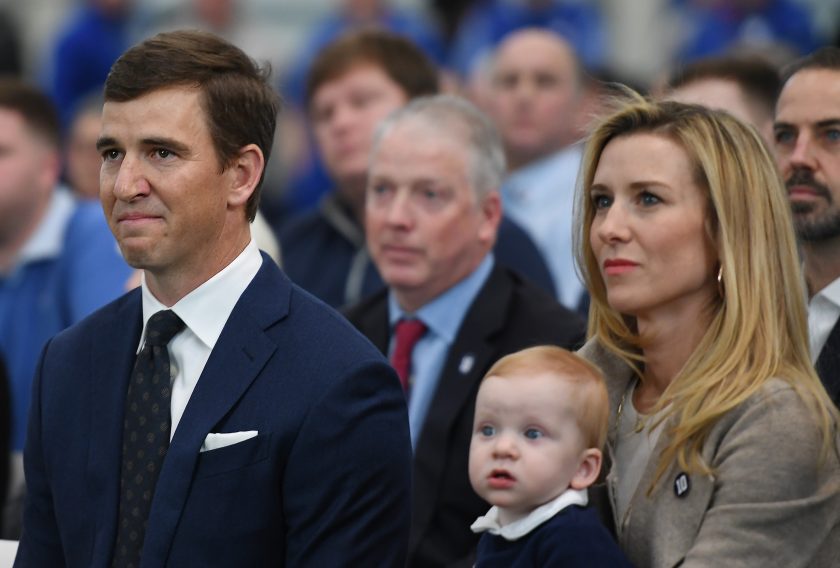 Abby attended the private Christian school Brentwood Academy in Brentwood, Tennessee. She then continued her studies at the University of Mississippi, where she received a degree in family and consumer sciences in 2005, with the hopes of becoming a fashion designer.

She's used her degree and spent much of her life dedicated to leading her and Eli's charity efforts, trading the life of a fashionista for a philanthropist alongside her National Football League husband.

In 2009, the couple donated such a sizable amount to New York City's St. Vincent Hospital's birthing center that it was renamed the "Eli & Abby Manning Birthing Center." Eli and Abby also pledged $1 million to the Children's of Mississippi $100 million campaign in 2016. Eli himself in 2007 helped raise $2.5 million for the construction of "The Eli Manning Children's Clinics" at the University of Mississippi Medical Center's children's hospital.

"Every mother wants her children to have what they need, and when they need medical care, they want that care to be compassionate and to be available nearby," Abby said in a release. "This is why Children's of Mississippi means so much to our family." 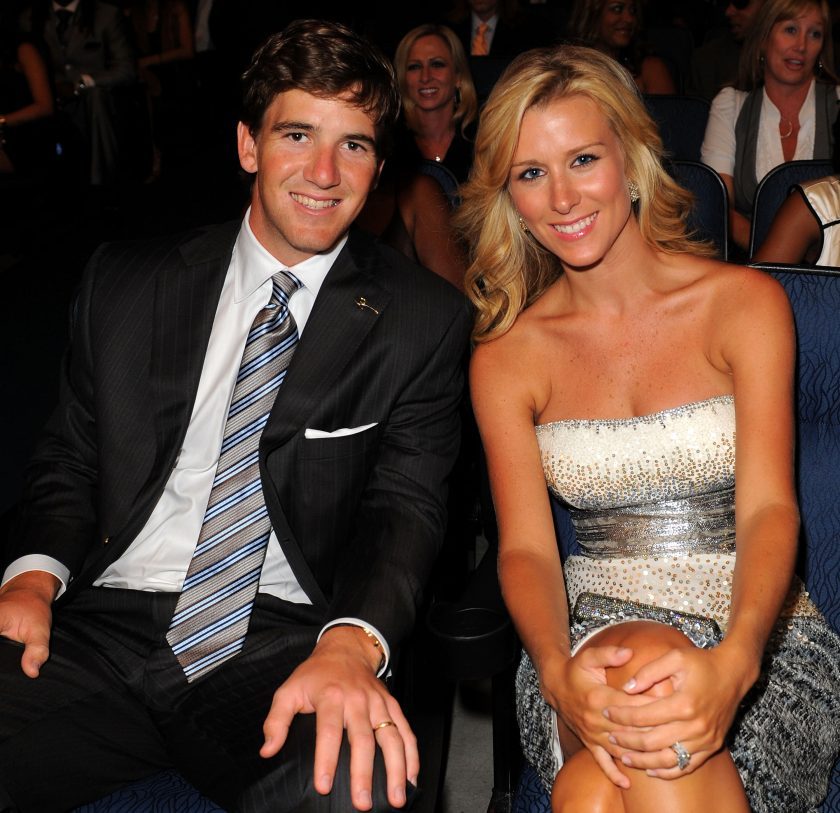 RELATED: Eli Manning's Net Worth: How Rich is The Two-Time Super Bowl Champ?

They met for the first time at Ole Miss in 2002. She was a freshman in the Kappa Delta sorority while he was a junior and the team's starting quarterback. As one of the best college football players in the SEC, Eli threw for 31 touchdowns in 2001 and then 3,400 yards in 2002 before taking the Rebels to a 10-3 mark in 2003.

Eli headed to New York when the Giants traded for him after the 2004 NFL Draft. Abby finished up her degree in Oxford, Mississippi, in 2005 and hopped on a plane to the Big Apple to work as an account executive in the fashion industry.

Three years after Eli's rookie season and just months after he beat an undefeated New England Patriots team led by Tom Brady in Super Bowl XLII, he and Abby tied the knot. They got married in April 2008 in Los Cabos, Mexico, at the One & Only Palmilla resort along the Sea of Cortez. His two brothers were groomsmen.

Eli knew in 2007 he wanted to marry Abby, per MyNewOrleans.com:

"During a trip home to New Orleans for Mardi Gras, he designed an engagement ring at Adler's. A few weeks later, they were slated to take a trip to see her family in Nashville. Abby thought he might propose to her then but Eli just couldn't wait that long. On a simple Tuesday evening they were spending together, Eli turned toward Abby and got down on his knee. Abby was taken aback at first but breathlessly said 'Yes!' He presented her with a gorgeous Adler's emerald-cut center stone ring, flanked by two emerald-cut diamonds on either side." 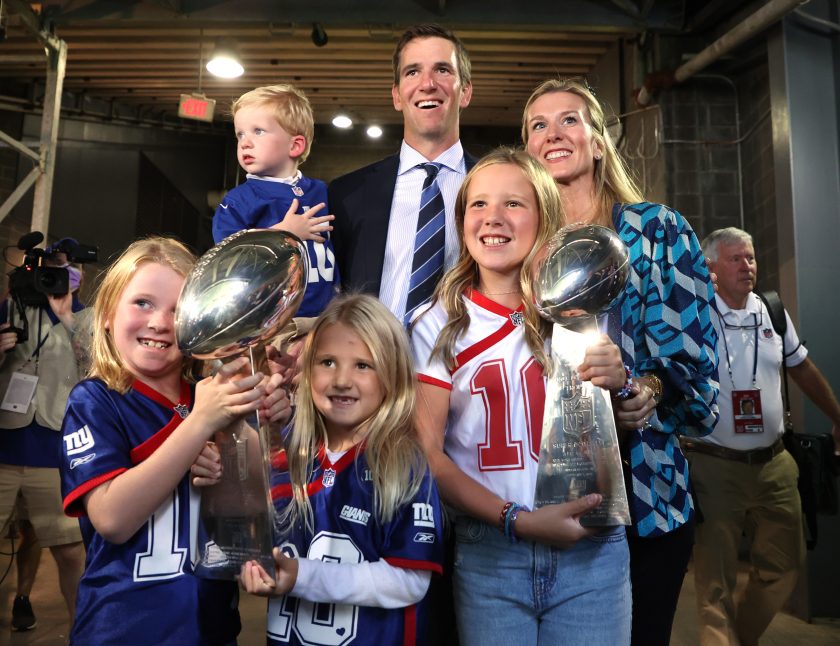 Eli and Abby have four kids together, one more than the three-child families they both grew up in.

Three years after eloping, Eli and Abby welcomed the birth of their first daughter in 2011, Ava Frances. Lucy Thomas was then born in 2013, followed by Caroline Olivia in 2015. Then like something out of a movie script, the couple's fourth child and first son -- Charles Elisha -- was born on Super Bowl Sunday in 2018. While finishing a playoff run with a Super Bowl win is great, finishing with the arrival of a new baby is pretty good too!

The four-time Pro Bowl quarterback told Giants.com in 2014 the role of fatherhood was far more important than any role on the gridiron. 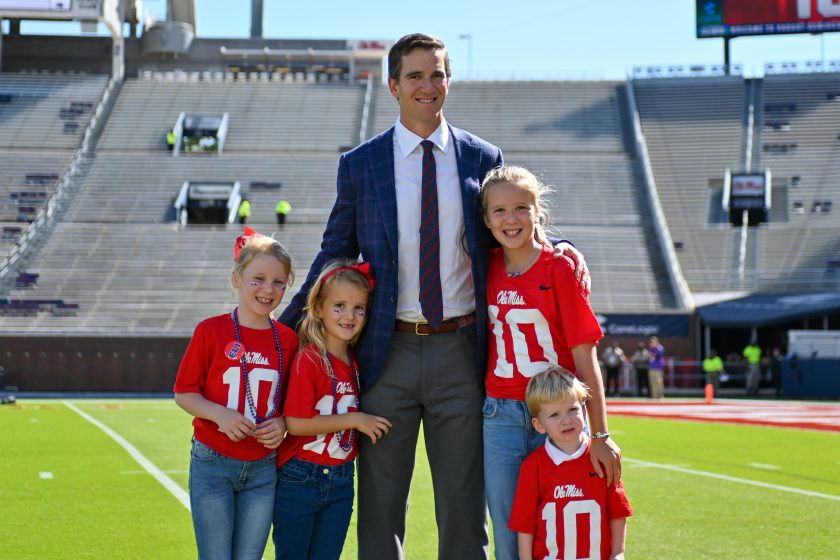 "My big role as a father at night, every night, is bath time," Manning told Giants.com. "My wife (Abby) will tell me that I get the girls all riled up before bedtime, because I like a lot of bubbles and I like splashes and we sing and dance in there."

"I consider being the father of my two girls the most important role that I have."

Like his brother, the former New York Giants quarterback has his hands full at home. He and Abby bought homes in the Hamptons and in Summit, New Jersey, after selling a place in Hoboken. They stay off social media and like to live a private life, however, so don't expect to see them on your feeds.

MORE: Peyton Manning's Wife is a Successful Businesswoman & Mother of 2