Eli Manning will go down in American football history as either one of the best players ever or as one of the most average. It just depends on which Eli you're talking about. Let's start with hum-drum-regular-season-long-meme-able face Eli.

Playoff Eli Manning was one of the few men who could slay the New England Patriots. His performances in the postseason were miles ahead of his regular-season play. Peyton's little bro knew how to throw when it counted.

Eli Manning's net worth is tied to both versions of Eli. His career earnings would be much lower if it weren't for Playoff Eli. But even without Playoff Eli, the youngest Manning brother would still be a millionaire.

Just how much is he worth today after two Super Bowl titles?

Before we talk about the youngest Manning brother, let's talk about his elders. Eli Manning is the son of former New Orleans Saints quarterback Archie Manning.

He grew up in the NFL's long shadow with his two older brothers Cooper and Peyton Manning. (Legend has it, Cooper Manning was the most talented Manning brother. A college injury would keep him from a professional career.) Eli's older brother Peyton also had a penchant for the pigskin, but more on him later.

Eli's football-centric childhood practically forced him to throw touchdowns. To hear the Manning brothers tell it, they became quarterbacks because they were too slow, clumsy and tall to play the other positions.

Elisha Nelson Manning IV (no wonder people think this guy's a goob) was born on January 3, 1981, in New Orleans, Louisiana, when 9 to 5 was the number one film in the country.

He played his high school ball at Isodore Newman School in New Orleans, the same as older brothers Cooper and Peyton. The Manning family is practically royalty at Newman. The Manning Clan is also revered in Oxford, Mississippi as well.

Eli was well prepared for college football after high school. The only question was where would he play under center? Would he follow his older brother Peyton to Tennessee or his father's footsteps to Mississippi? Eli, a rebel at heart, chose Ole Miss.

Elisha joined the University of Mississippi Rebels from 2000-2003. His junior and senior years were his strongest, leading the Rebels to two consecutive bowl game victories over Power Five schools Nebraska and Oklahoma State. Manning was then awarded the Maxwell Award, a third-place finish in Heisman voting and the first overall pick in the 2004 NFL Draft.

There was only one problem with Eli being the number one pick, though: Eli Manning hates Southern California.

It helps to have a well-connected daddy.

The San Diego Chargers have long seemed a franchise bent on losing no matter what. It gives them the advantage of a single-digit draft pick nearly every year. The scene was no different in 2004 and the Chargers held the first pick.

That meant they would likely pick young Eli and promptly ruin his career. Archie had seen this movie before in his own career with New Orleans. Archie made a few phone calls and Eli's career was saved.

The San Diego Chargers selected Eli Manning first overall, but only as a formality. With the No. 4 pick, the New York Giants selected Philip Rivers and made a deal with the Chargers. The draft picks were traded and NFL history was forever changed. Rivers went on to be one of the best to never win a Super Bowl; Eli one of the worst to win one, twice.

Eli Manning as the Giants' QB:

RELATED: Eli Manning and His Wife Built The Next "Manning Family"

Eli's career was so average that it makes one wonder how long he would've played were it not for his last name. Just to be clear, I am not making the argument that Eli was a bad football player in any way. I'm just pointing out that he wasn't an exceptionally good one, especially when you compare him to his brother.

While these numbers go way beyond sibling rivalry, I am admittedly leaving out two very important stats. It's the one statistical measure where the Manning brothers are thick neck and neck. Both Super Manning Bros won two Super Bowls.

Eli Manning retired after the 2019 season. All anybody remembers him for is the two Super Bowls he won nearly a decade earlier.

In the Super Bowl era, Manning is tied for the 3rd-most postseason game-winning drives in 4th quarter or OT. Only Tom Brady and John Elway have more. pic.twitter.com/vd1jBEsve7

Eli Manning likely stamped his ticket to Canton, Ohio with Super Bowl victories in 2008 and 2012. In both years, Eli did the unthinkable. He outplayed, outperformed and outlasted the superior Tom Brady and New England Patriots.

In both Super Bowl victories (Super Bowl XLII and Super Bowl XLVI), Eli rose to the occasion, played incredibly and earned two Super Bowl MVP awards. Those awards are the summit of his career. It's a pretty damn high summit to reach.

After his first Super Bowl win in 2008, Eli inked a lucrative six-year deal with the Giants. Who knows where Eli would be now if David Tyree hadn't held on to that "Helmet Catch" years ago?

As the aughts came to a close, the Giants were the only consistent Brady and Belicheck Beaters of their era.  Despite all the trash I've been talking about Eli for this entire article, that accomplishment alone is truly worthy of the Hall of Fame.

Manning would go on to do little of note till his retirement after the 2019 NFL season. He finished his career with a record of 117-117. How's that for perfectly average?

Eli Manning may be the most average NFL quarterback of all-time, but he certainly wasn't paid like it. According to Spotrac, Eli Manning has long been paid like a Hall of Famer. He made more than $250 million over his NFL career.

It doesn't stop there. Despite a face made for radio, Eli is on television commercials all the time, often sharing screen time with family. We've covered some of the more cringey aspects of Manning Family advertising in the past, so we'll just let those raps R.I.P.

The retired NFL quarterback has inked endorsement deals with Kraft, DirecTV, Toyota, Gatorade, Citizen and Reebok. He also did some fun commercials with his brother and the Williams sisters.

Don't take this the wrong way, but something is mesmerizing about Eli Manning aggressively licking an Oreo, the Dessert of Champions:

The Mannings have made their name a family business. It goes beyond Peyton. Eli does BBQ commercials with his father Archie and the family co-authored a children's book together in 2009. By then, Eli was starting his own family. 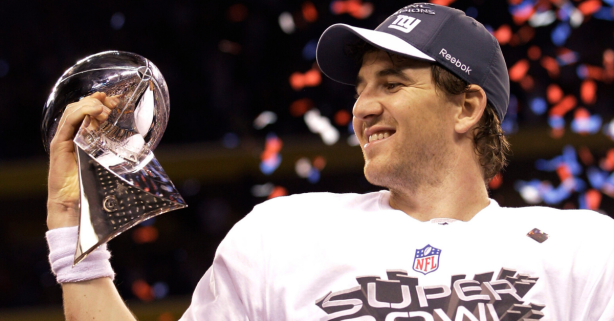 Outside of his famous brother and father, Eli Manning keeps his family out of the spotlight. He married college sweetheart Abby McGrew in 2008 and has since had four children together. The couple still lives in New Jersey where his children were raised.

With two Super Bowls, two famous family members and four children to feed, you may be wondering "how much is Eli Manning worth?"

The answer, my friend, is Giant.

Eli Manning's net worth is estimated at $150 million today, according to Celebrity Net Worth. That makes him one of the richest NFL players of all time. It's a small price to pay to prevent Tom Brady from having two more Super Bowl rings.