Franco Harris authored the greatest "Where were you when" play in football history.

Trailing 7-6 to the Oakland Raiders in the 1972 AFC Divisional Playoff game, the Pittsburgh Steelers faced a fourth-and-10 with 22 seconds remaining. Quarterback Terry Bradshaw dropped back to pass, evaded some Raider defenders and fired down the middle to running back John Fuqua. Fuqua was crushed by Raiders safety Jack Tatum, but the ball stayed alive. Franco, a fullback who was trailing the play like a good basketball player would in transition, snatched the ball from his shoestrings and went all the way to the house.

Final score: 13-7 Steelers -- capped by greatest sequence ever seen on the gridiron.

The "Immaculate Reception" turned Harris into a star overnight, but it was only the beginning of a legendary career. The Penn State alum played a major role in Pittsburgh's four Super Bowl victories from 1974 to 1979. In Super Bowl IX, his first appearance in the sport's biggest game, he rushed for 158 yards and a touchdown in a 16-6 win over the Minnesota Vikings, earning Super Bowl MVP honors in the process.

Harris could always be counted on when it mattered most, and when he hung up the cleats after 13 years in the NFL, he had 12,120 rushing yards to his name -- which ranks 15th of all time in NFL history. He was inducted into the Pro Football Hall of Fame in 1990.

After a lifetime of being one of football's greatest ambassadors, the Steelers legend passed away on Dec. 21 at the age of 72. 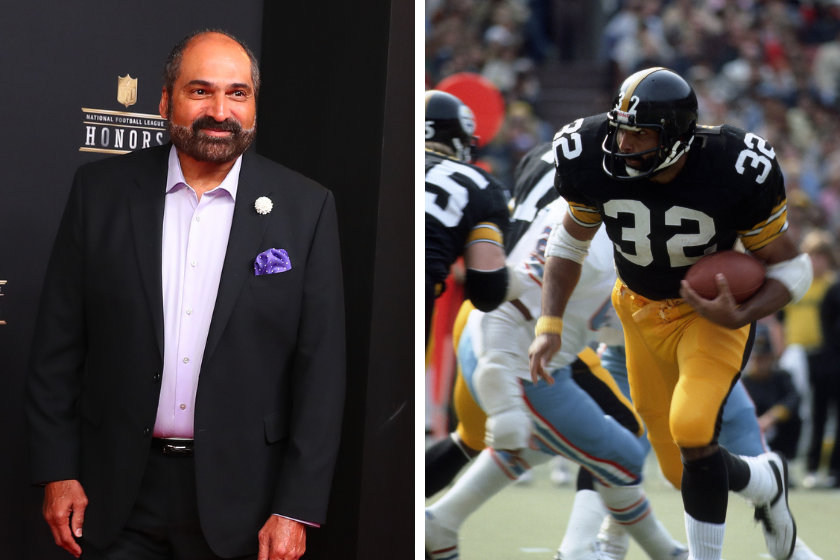 On Wednesday morning, Harris' son, Dok, told the The Associated Press his father had passed away. The cause of death wasn't revealed.

"We have lost an incredible football player, an incredible ambassador to the Hall and most importantly, we have lost one of the finest gentlemen anyone will ever meet," Pro Football Hall of Fame president Jim Porter said in a statement. "Franco not only impacted the game of football, but he also affected the lives of many, many people in profoundly positive ways."

Harris remained involved in the Steelers organization and Pittsburgh community after he retired. He would often appear at team events in his gold Hall of Fame jacket. And if you need any clue as to what Harris meant to "Steel City," look no further than the statue of him at Pittsburgh International Airport. The Steelers are set to retire his No. 32 this Saturday against the Las Vegas Raiders, too.

Harris' passing comes two days before the 50th anniversary of the "Immaculate Reception." While we'll take the time to remember the iconic play, we'll also celebrate the life of one of the greatest football players to ever do it.