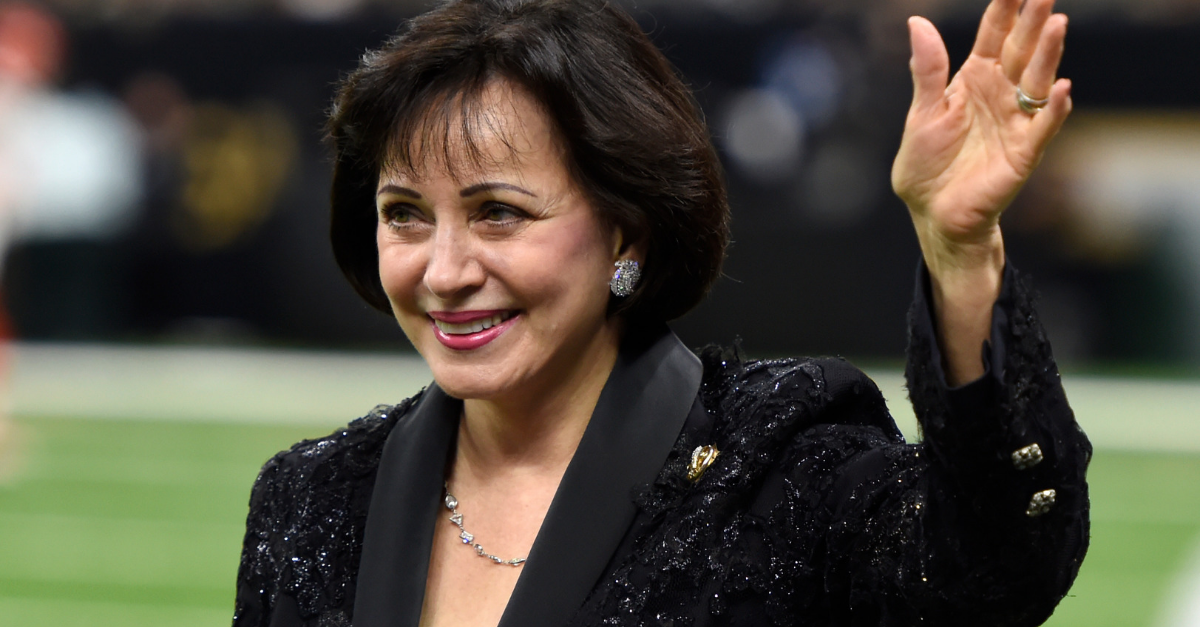 When the holiday season rolls around, it’s time to stock up on your favorite team merchandise and chant “Jingle Bells” all the way to the cash register. While the season is really meant for family, friends and good tidings, finding the perfect gift to put a smile on someone else’s face is equally as important today. Sometimes, that means putting a few gifts on layaway so they can be paid off over time.

Thanks to an amazing gesture by New Orleans Pelicans and New Orleans Saints owner Gayle Benson, hundreds of people at a New Orleans Walmart are getting a silent Christmas miracle when they go to pick up their orders for the holiday.

According to The New Orleans Advocate, Saints and Pelicans owner Gayle Benson silently paid off layaway orders to the tune of nearly $100,000. She wasn’t looking for fanfare or praise. She just wanted to give back to a community that has given so much back to her family.

There are 408 people who will walk into the Walmart on Tchoupitoulas Street in the Big Easy to find out that their entire layaway order has been paid off by an unknown party.

A Saints spokesman confirmed with The Times-Picayune that Benson went out and did this random act of kindness on her own.

Several customers who have gone to pay on their layaway items at the Tchoupitoulas Walmart have received shocking news. Their items have been paid off by someone else.

Saints owner Gayle Benson has paid off more than 400 orders, totaling nearly $100K, according to the store.

RELATED: The Amazing Reason Why This Saints Punter Did Over 400 Pull-Ups

After the passing of her husband, longtime New Orleans Saints owner Tom Benson, his widow inherited both Louisiana NBA and NFL franchises back in March 2018. Even before then, not even Saints quarterback Drew Brees can measure up the level of generosity the Bensons have invested in the NOLA community.

Over the years, the Bensons donated $8 million to Loyola University to build a new campus chapel and another $2 million to the Our Lady of Guadalupe Church in New Orleans for a senior citizen center. In addition, they donated $20 million back in 2015 for the Tom and Gayle Benson Cancer Center to help expand cancer care services and clinical research all around the Gulf.

After another $7.5 million donation to help bring the Tulane Green Wave’s football games back to campus, the playing surface was renamed Benson Field.

All this charity is certainly feasible for Gayle Benson, who has a net worth around $2.7 billion according to Forbes.

Gayle Benson, owner of the New Orleans Saints, is the richest person in Lousianahttps://t.co/9X2aX8mj4y pic.twitter.com/gOIRlktI3r

Prior to her marriage to Tom Benson, Gayle owned an interior design business called Gayle Bird Interiors Ltd., but her business had several liens against it for failure to pay federal and state taxes. The New Orleans native is a graduate of Martin Behrman High School and has been a staple of the NOLA community all her life.

Philanthropy is such an easy thing to help capitalize on popularity, but sometimes doing something silently just to help is an even more important judgement of character.

Gayle Benson’s random act of kindness will extend more than she knows, and hundreds of New Orleans natives are getting a Christmas miracle coming their way this holiday season.