It was a foreign concept to pass on first down, let alone line up with three or more wide receivers, in the NFL a little over 20 years ago.

You ran the ball, mixed in some quick passes and went vertical out of necessity. This was the formula for most offenses back then. At least until the St. Louis Rams turned the concept on its head. From 1999 to 2001, the Rams introduced an aerial-oriented offense built around speed, stretching the field and precise timing to go along with a dynamic run game.

It all started when Rams head coach Dick Vermeil promoted Mike Martz to offensive coordinator. Martz had been on the Rams staff as a quarterbacks and wide receivers coach under Vermeil in the mid-'90s. He took a two-year detour to Washington D.C. before Vermeil hired him back to lead the offense in 1999. Boy, did it pay off. 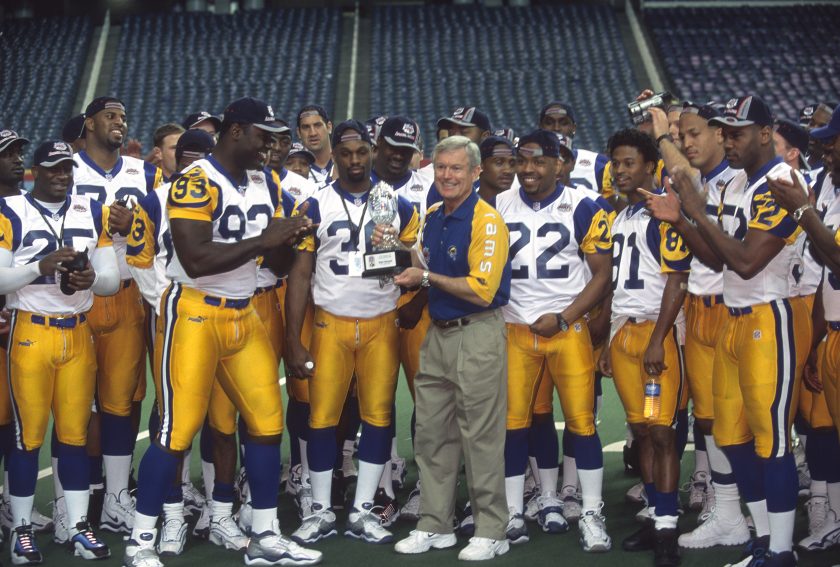 Over the three-year stretch, the Rams led the NFL in total offense in each season -- setting a then-league record for most yards in a single season with 7,075 in 2000. They scored 500 or more points. They recorded at least 8.6 yards per pass attempt. Also, either quarterback Kurt Warner or running back Marshall Faulk won the NFL MVP Award.

In the midst of it all, ESPN's Chris Berman coined the nickname "The Greatest Show on Turf" while comparing the electric offense to the Ringling Brothers Circus -- aka The Greatest Show on Earth. Earth was replaced with Turf because of the artificial playing surface at the The Dome at America's Center in St. Louis, the Rams' home field. The surface was the perfect complement to Martz's offensive philosophy.

Above all the records and individual awards, their crowning achievement was winning Super Bowl XXXIV in dramatic fashion over the Tennessee Titans. Vermeil relieved head coaching duties to Martz following the Super Bowl win, and as you can see, the offense kept humming. However, the Rams lost to the New Orleans Saints in the Wild Card round in 2000. And, after rebounding with a 14-2 record in 2001, they reached Super Bowl XXXVI but fell to a young Tom Brady and the New England Patriots despite being 14-point favorites. As one potential dynasty fell, another rose to dominate the league for two decades.

Nonetheless, the "Greatest Show on Turf" was one of the most prolific offenses in NFL history and deserves to be celebrated. Let's take a look at what the key pieces are up to over 20 years later. 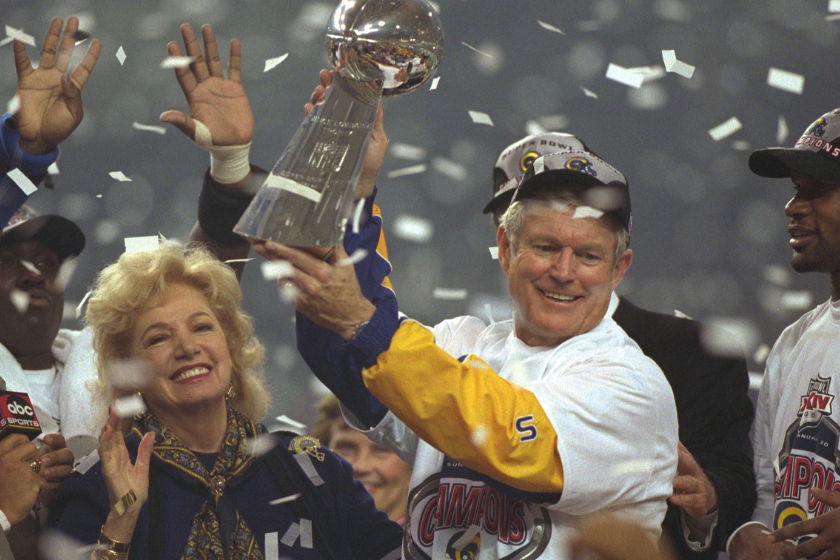 Before retiring for the second time (more on that later) in 2005 after a relatively successful season coaching the Kansas City Chiefs, Dick Vermeil had a long and illustrious career in the NFL. Like most legendary coaches of his ilk, Vermeil worked his way up from the Special Teams coach of the Los Angeles Rams in 1969 to his first head coaching job with the the Philadelphia Eagles in 1976. The joyride didn't last too long, as Vermeil retired, citing occupational burnout, after the 1982 season.

When happened next is interesting. Vermeil took a 13-year hiatus from coaching, only to return to lead the St. Louis Rams to two back-to-back disappointing seasons in 1996 and 1997. And that's when things began to click. Vermeil put his faith in Kurt Warner after Trent Green was injured early on in the season, and the rest is history. Now, Dick Vermeil is heading into the halls of Canton as a part of the Pro Football Hall of Fame Class of 2022. Well done, Dick! 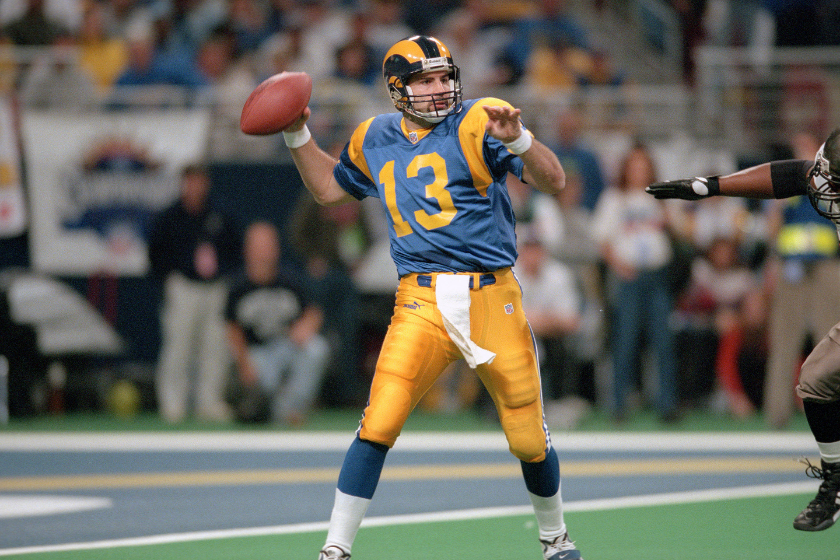 RELATED: Kurt Warner's Wife is a Former Marine With a Tragic Past

Kurt Warner went from a grocery stocker to an NFL starting quarterback in barely a two-year span. He took over after Trent Green went down with a knee injury in the 1999 preseason and the rest is history. Warner took home the NFL MVP in 1999 and 2001. During those seasons, he threw for a combined 9,183 yards and 77 touchdowns. He was inducted into the Pro Football Hall of Fame in 2017.

Today, Warner works as an analyst for NFL Network. 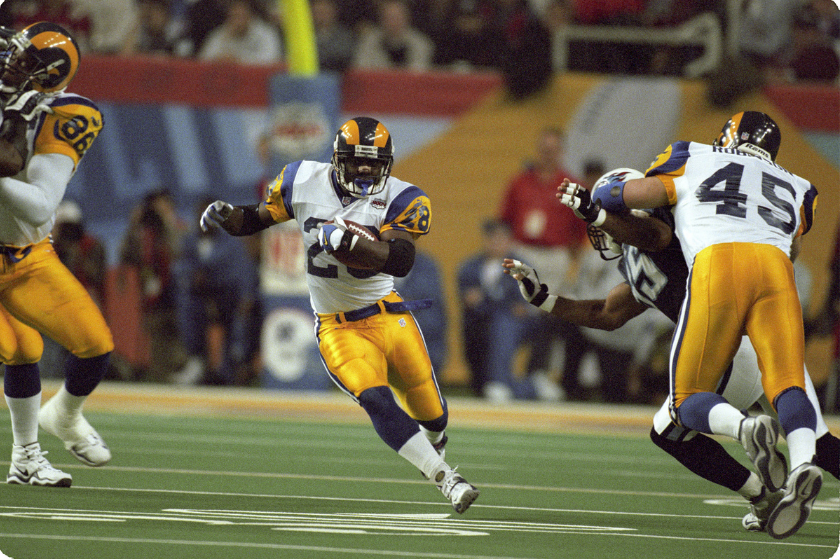 Dick Vermeil should be arrested for how he acquired Marshall Faulk. Vermeil flipped second- and fifth-round draft picks for a former second-overall pick in the prime of his career. Pure highway robbery.

Faulk went on to register 1,381 rushing yards and 1,048 passing yards in 1999 for a total of 2,429 yards from scrimmage, breaking Barry Sanders' record of 2,358 set two years prior. He became the second player after Roger Craig to eclipse over 1,000 rushing and receiving yards, respectively. Carolina Panthers star Christian McCaffrey joined the club in 2019.

During "The Greatest Show on Turf" three-year stretch, Faulk was named the NFL's Offensive Player of the Year every season and won the NFL MVP in 2000. He was inducted into the Pro Football Hall of Fame in 2011.

The legendary running back worked as an analyst for NFL Network after his playing days, but he was let go in 2017 amidst sexual harassment allegations. Now, Faulk focuses on his charity, The Marshall Faulk Foundation, and frequently works with BetOnline. 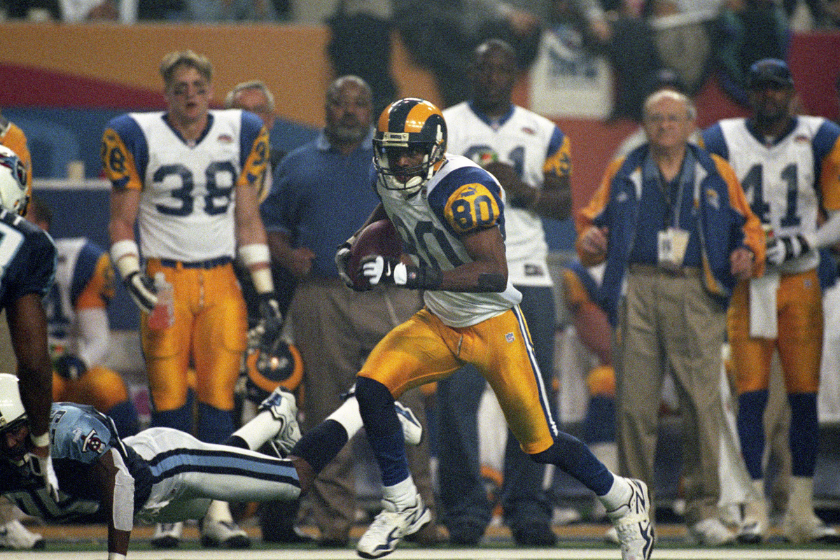 Warner's favorite target. Bruce was an absolute stud out wide and eclipsed over 1,000 receiving yards every year of "The Greatest Show on Turf" run. He also added 27 total touchdown catches. Bruce's greatest moment as a Ram came when he caught a 73-yard touchdown in Super Bowl XXXIV to give his team the lead with two minutes left in the game.

After football, Bruce now runs his own construction company, Bruce Construction Management, down in Fort, Lauderdale, Florida. He was inducted into the Pro Football Hall of Fame in 2020. 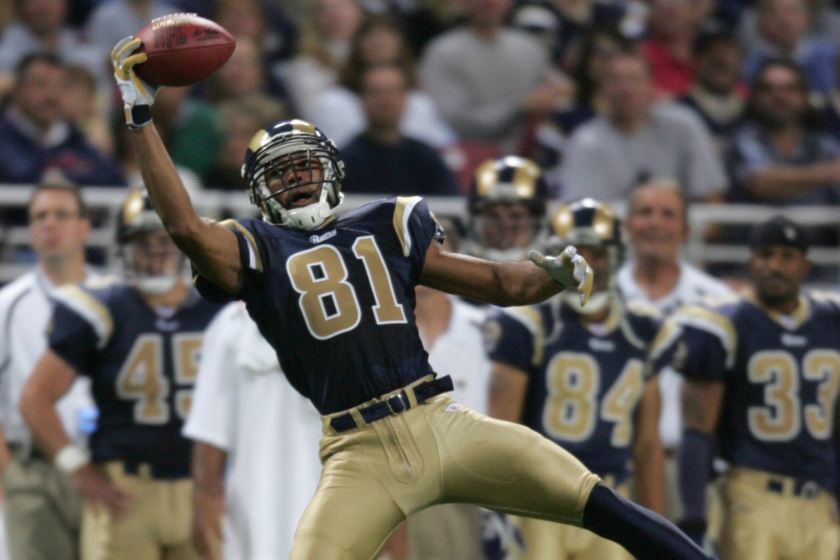 Holt was sixth-overall draft pick in 1999 and started contributing right away. His best year during the run was in 2000, when he reeled in 82 receptions for 1,635 yards and six touchdowns. The wideout eclipsed at least 1,000 yards in eight of his 11 NFL seasons.

Holt worked for the NFL Network after he hung up the cleats (a commonality among "Greatest Show on Turf" stars). Now, he concentrates on running Holt Brothers Inc. with his brother Terrence Holt, who was an NFL safety for six years. Holt Brothers Inc. includes branches dedicated to construction, development, football and community outreach. 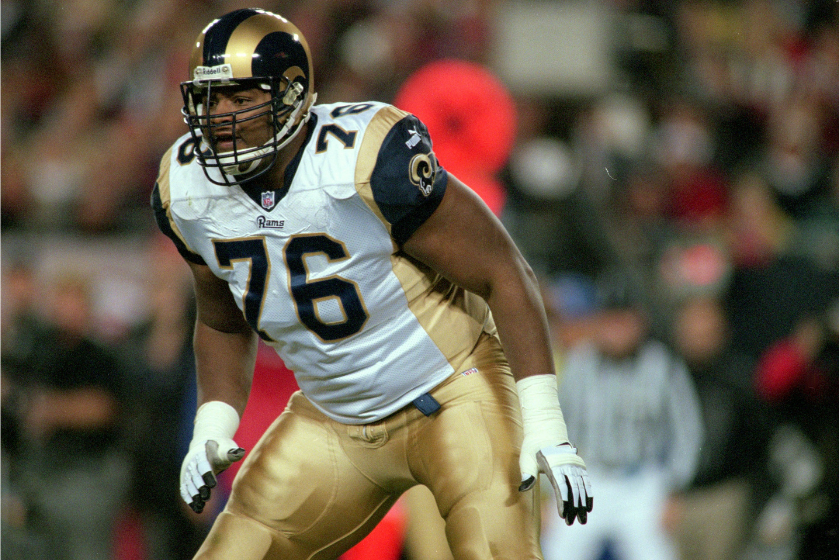 A quarterback is nothing without great protection, and nobody was better at protecting Kurt Warner than left tackle Orlando Pace. Pace didn't miss a start in "The Greatest Show on Turf" era and was a First-team All-Pro member every year. The offensive line star was inducted into the Pro Football Hall of Fame in 2016.

Today, Pace is a part owner of the St. Louis radio station KFNS-AM and the TITLE Boxing Club in the city he used to play in. Additionally, he owns various rental properties in his home state of Ohio. His son, Landon Pace, is an up and coming high school football recruit and scored his first scholarship offer from West Virginia in February 2022. 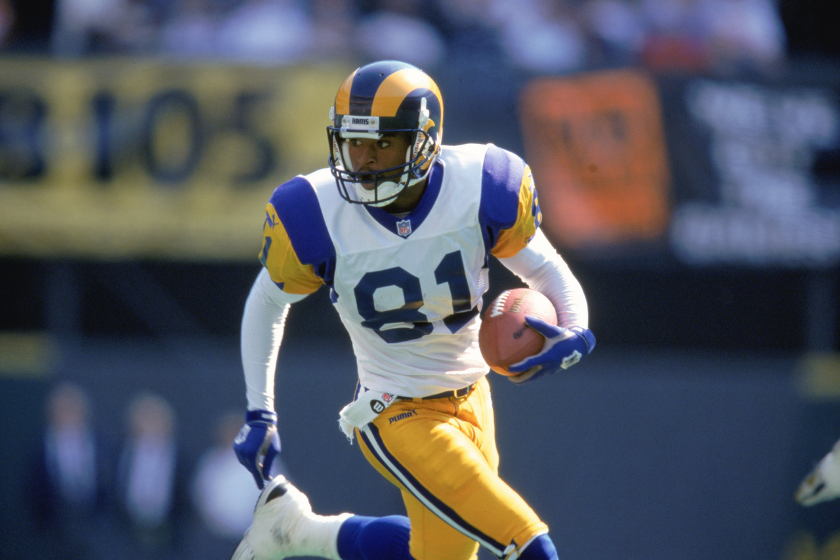 Hakim was a speedster known for making big plays. He averaged 14 yards per catch during the stretch and was also one of the league's best punt returners.

Hakim turned to coaching after his NFL career. He was the wide receivers coach of the San Diego Fleet of the Alliance of American Football in 2019 and held the same position with the St. Louis Battlehawks of the XFL in 2020. 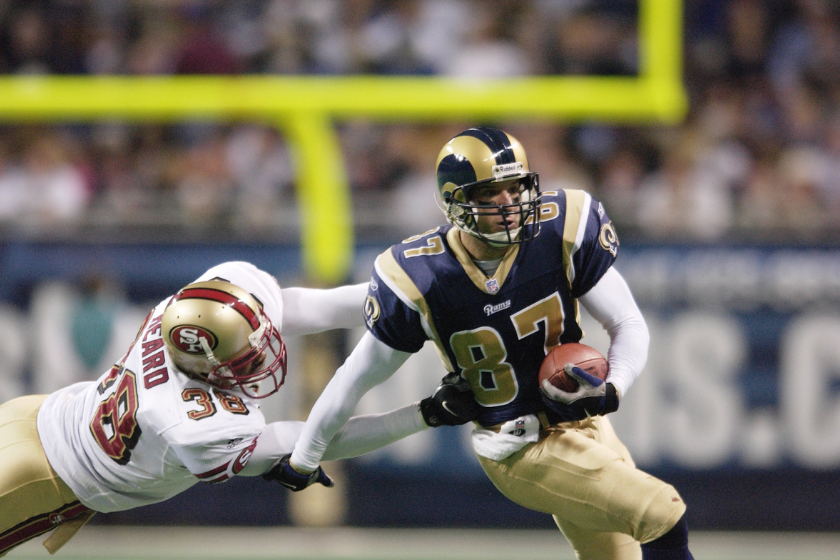 Without Ricky Proehl, the Rams don't win their Super Bowl. He had the game-deciding 30-yard grab against the Tampa Bay Buccaneers in the 2000 NFC Championship to give St. Louis the lead with 4:44 remaining. The Rams went on to win 11-6.

Proehl enjoyed a 17-year career before retiring in 2006. He now works as a football trainer, consultant and motivational speaker. 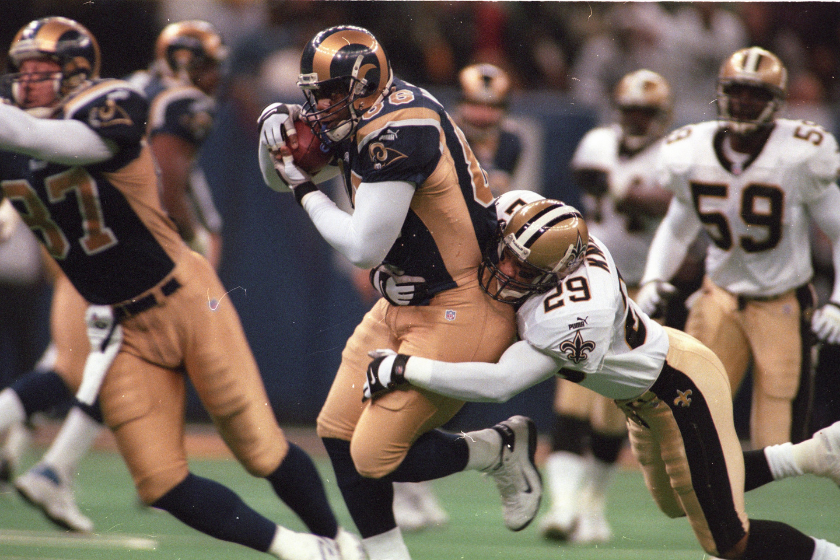 Williams was a safety valve for Warner when one of the primary weapons weren't open. At 6-foot-5 and 265 pounds, the tight end provided a big target. Williams' receiving numbers don't jump off the page, but he was a key blocker for Faulk and had solid hands when he needed to.

Williams is now an entrepreneur, investor and philanthropist, according to his Twitter. He also founded Champion Academy, a foundation that focuses on helping teens overcome obstacles to maximize their potential in school and life.

It's been more than two decades since "The Greatest Show on Turf" changed the game, and it's nice to see the key members doing well.