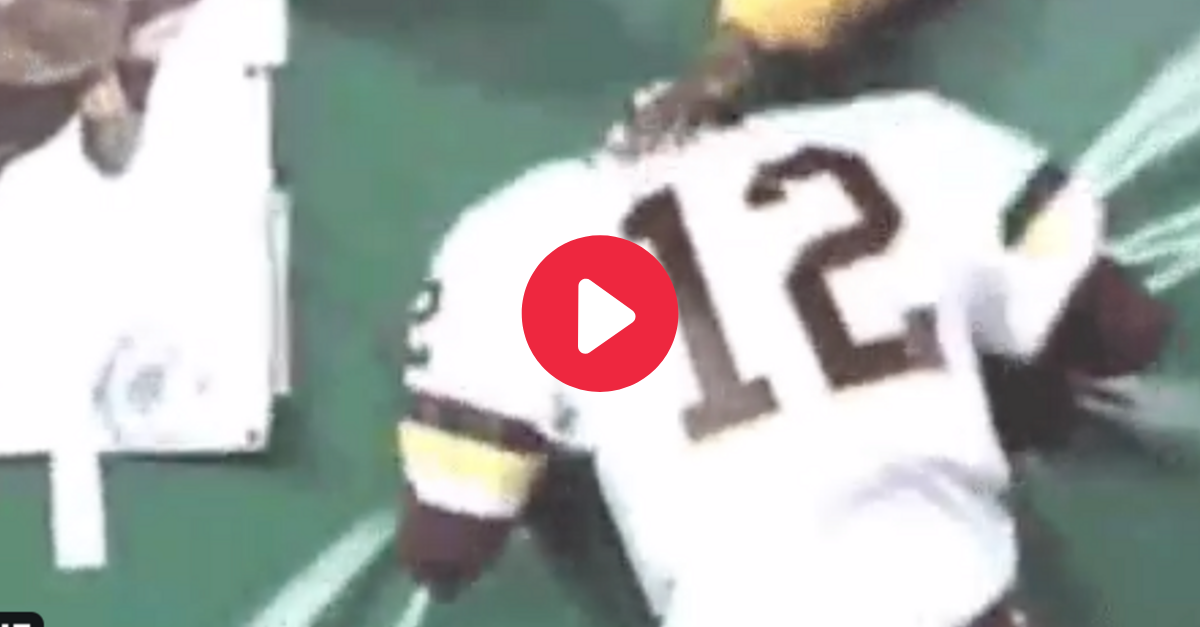 There have been some pretty stupid celebrations in the history of sports, but Gus Frerotte ramming his head into a wall definitely takes the cake as the dumbest.

In his third season as the starting quarterback for the Washington Redskins, Frerotte would eventually become known for a Week 13 touchdown celebration instead of 15 seasons in the National Football League.

RELATED: NFL?s Ultimate ?What If? Team: 21 Players Who Never Panned Out

Frerotte entered the 1997 season as the three-year starter at quarterback and his fourth season overall as a seventh-round pick out of Tulsa. He was coming off his first, and what would be only, Pro Bowl selection in the 1996 season, where he passed for 3,453 yards and 12 touchdowns with 11 interceptions and a 57.4 completion percentage.

In his follow up to the Pro Bowl, Frerotte did not have as much success. In 13 games, he had 2,682 passing yards and 17 touchdowns, but saw his completion percentage dip to 50.7 percent and threw 12 picks.

The Redskins entered Week 13 with a 6-5 record after a loss to the Dallas Cowboys and needing a win against the New York Giants. Frerotte, to this point had struggled. But it wasn’t the statistics or score that made this game famous. It was what the Redskins quarterback did after one play.

End Around: Gus Frerotte at peace with infamous headbutthttps://t.co/FsSWGqvmyx pic.twitter.com/6lxykc09MW

Late in the second quarter, with the game tied 0-0, Frerotte ran into the end zone from the one-yard line. Some players may have gone for a simple spike, a dance, a jump into the crowd, or a team celebration, but not our boy Gus. He really decided to use his head on this one.

Frerotte walked through the end zone to a padded wall and just rammed his head into it. By going top-of-the-head first, it led to his head going inward towards his spine. He suffered a sprained neck and had to leave the game at halftime for the hospital.

The Giants would score a touchdown in the third quarter to tie the game 7-7, which would be the final score.

On Thom Loverro’s Cigars and Curveballs podcast, Frerotte admitted it was tough to get through the incident and that fans would try to badger him constantly. “You know, if you didn’t have a sense of humor about it, I don’t think that you would ever survive it,” he said.

“It happened, and I’ve been able to move on from it, but I still can talk about it, because it was a part of my life. You know, it didn’t define me, and it still doesn’t define me,” Frerotte added. “And that’s what’s great. I think if I didn’t laugh about it, I wouldn’t have been able to go on and play another 10 years after that.”

Even though he would return the next week against the St. Louis Rams, that would be his last game of the season and would only play in three games the next season, which was his last in Washington. He would play 10 more seasons in the NFL with stops with the Detroit Lions, Denver Broncos, Cincinnati Bengals, Minnesota Vikings, Miami Dolphins, and St. Louis Rams before his retirement.

Other than the neck injury, a big note for his career is that he was on just three playoff teams and never even came close to a Super Bowl. In 15 years, Frerotte managed to take part in just four postseason games, playing in three of them. The only playoff win he took part in was as a backup in 2004 against the Green Bay Packers.

Despite Frerotte having a long, successful career of 15 seasons. he will still always be remembered for injuring himself by head-butt a wall.

But just remember, he isn’t the only player in any sport to do this. Kendry Morales of the Los Angeles Angles of the MLB hurt his leg while celebrating a walk-off home run. There are quite a few instances of this in football, baseball, and basketball. Frerotte is just the most notable because it just made no sense.