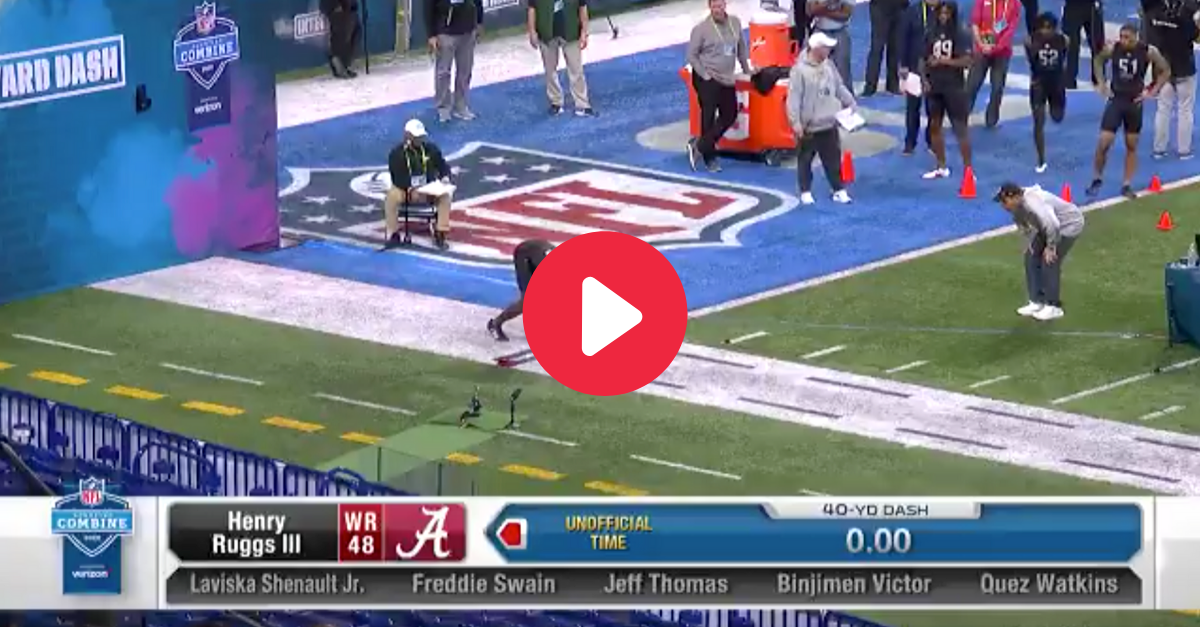 While his teammate and positional counterpart Jerry Jeudy has received most of the love in college and as the NFL Draft approaches, it’s Ruggs who possesses the acceleration and quickness NFL teams are in search of.

The Alabama Crimson Tide’s blazing wideout is preparing to run his 40-yard dash at the NFL Combine at Lucas Oil Stadium in Indianapolis, and he’s set some massive expectations for himself in the event. To Ruggs, though, they don’t appear all that big.

“My goal is to be the fastest ever,” he said in a live interview with CBS Sports. “I feel pretty good about it. I’m confident.”

Since electronic timing was implemented at the NFL Scouting Combine in 1999, there have been a limited amount of sub-4.30 times. Ruggs will almost assuredly run under a 4.30.

Here are the five fastest times in NFL Combine history, according to NFL.com.

Ruggs Was the Fastest Player in College Football

RELATED: Alabama Could Break Record for Most First-Round Picks

Don’t let that diminish the fact that the former Alabama speedster was easily the fastest player in NCAA football last season.

The proof is in the tape, and the tape says he reached a ridiculous 24.3 mph on a touchdown against South Carolina in 2019.

He also hit that number in a play against Missouri back in 2018:

Jeudy said this is where Ruggs hit 24 MPH. His legs out there looking like the roadrunner in the cartoon. #BeepBeep https://t.co/MlkQe7vbUK

Henry Ruggs III believes he's even faster than his 4.25 time in 40:

“I feel like that can be one of my best assets as a player, as a receiver, my quickness & long-field speed. I’m trying to play consistently at that 4.2 & do everything at that level.”https://t.co/nDFejEe0r7 pic.twitter.com/3igD9sBVwi

Ruggs has ran the 40-yard dash before. At Alabama’s Pro Day last year, he turned in a 4.25 40-yard dash time that most would be ecstatic about. Not Ruggs, though.

“I actually was kind of upset after I ran because I didn?t feel like I had a good start but after they told me the numbers, I was like ? I feel like I can do better,” he said in an Alabama Football YouTube video.

For comparison, the fastest player at the 2019 NFL Combine was Ole Miss safety Zedrick Woods, who ran a 4.29. Ruggs would have easily beaten that had he been eligible for the draft.

NFL Network‘s Daniel Jeremiah predicted Ruggs will run a sub-4.30 time and Alabama teammates believe the same. Alabama cornerback Trevon Diggs even picked Ruggs to run it in 4.19 seconds, which is almost unthinkable.

Ruggs didn’t see as much action as Jeudy or Smith last season, but he still turned in some solid numbers. As a junior, he hauled in 40 passes for 746 receiving yards and seven touchdowns.

The former Crimson Tide receiver torched cornerbacks during his time in Tuscaloosa, finishing with 98 receptions and more than 1,700 yards and 25 touchdowns.

To nobody’s surprise, he was a four-star recruit coming out of high school. He also ran track for Robert E. Lee High School in Montgomery, Alabama.

This article was originally published February 28, 2020.