By some sort of miracle, the Cincinnati Bengals are in the Super Bowl. Nobody could've predicted Joe Burrow, Ja'Marr Chase and the #WhoDey crew would be here after winning a total of six games the past two seasons. Yet, the addition of a franchise quarterback, the first AFC North division title since 2013 and two wins over the mighty Kansas City Chiefs later, the Bengals are back in the big game for the first time since 1989.

One of the stars of the Queen City's last Super Bowl team was none other than Elbert "Ickey" Woods. The running back immediately became a contributor as rookie for the Boomer Esiason-led offense. He juked, ran through defenders and found the end zone 15 times that season. It was what he did after scoring that made him famous. The "Ickey Shuffle" was an instant hit and fans would eagerly hope Woods scored a touchdown just to see him boogie a bit.

Woods performed better than the Bengals could've hoped for as a rookie back. However, his career was cut short after just four years due to several injuries coming one after the other. It's impossible to say what his career would've looked like had be been able to stay healthy, but the former Bengals star found a bigger calling through tragedy. 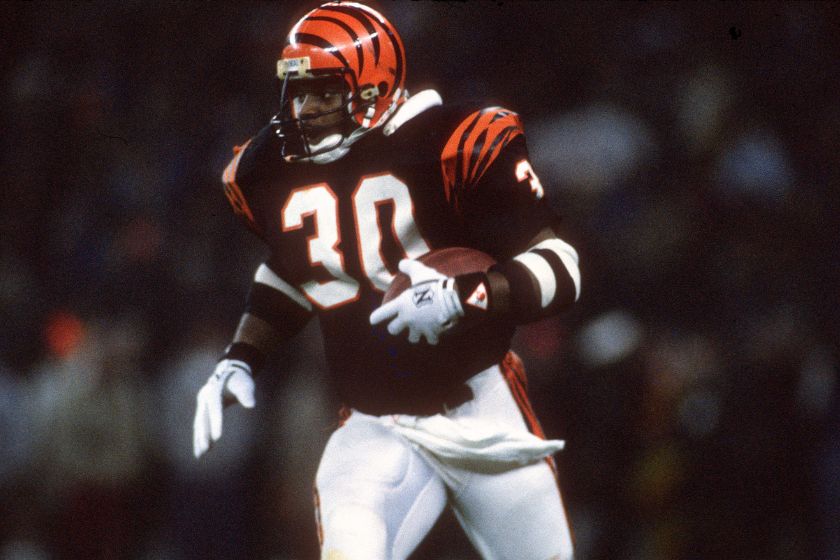 Ickey Woods grew up in Fresno, California and attended Edison High School. He was bestowed the Ickey nickname in his early days when his brother's pronunciation of his name sounded like "eee-eee." The moniker evolved into Ickey and stuck.

Woods played his college football at UNLV alongside star quarterback Randall Cunningham. After seeing limited playing time during his first three seasons, he broke out as a senior and rushed for 1,658 yards and 10 touchdowns. This led to the Bengals selecting him with the fourth pick of the second round (31st overall) in the 1988 NFL Draft.

Woods didn't miss a beat upon entering the NFL. He rushed for 1,066 yards while averaging 5.3 yards per carry (the best mark in the NFL that year) and scored 15 touchdowns while helping Cincinnati go 12-4. He kicked his game into gear in the playoffs by rushing for over 100 yards in the first two rounds to go along with three touchdowns. The San Francisco 49ers were able to hold him to 79 yards in Super Bowl XXIII, which was a major reason they ended up winning 20-16.

It looked like Ickey had a promising career ahead of him. His body didn't agree. He tore his left ACL early on in his sophomore season and Harold Green ended up replacing him. Woods hurt his right knee before the 1991 season, too. This caused him to miss a total of seven games. By that point, with his knees shot and Green having a hold on the backfield, he retired at the age of 26.

His career is a "what could've been" if there ever was one, but he more than left his mark on the NFL with the "Ickey Shuffle"

RELATED: The "Super Bowl Shuffle" Made the 1985 Bears Larger Than Life

Ickey was great in between the sidelines, but he was a treat to watch once he crossed the goal line. It was then that he would break out his iconic touchdown dance: The Ickey Shuffle.

The Shuffle involved him bouncing from side to side while pointing with the ball in between every couple of steps. The celebration instantly became a hit and led to many NFL players copying it as well as several commercial appearances.

Per Cincinnati.com, Woods told the Chicago Tribune in 1989 that the dance just "popped in his head like a miracle." We couldn't be happier it did.

After the Bengals defeated the Chiefs in this year's AFC Championship Game, Ickey congratulated Joe Burrow on the field and Burrow went right into the Ickey Shuffle. Ickonic. 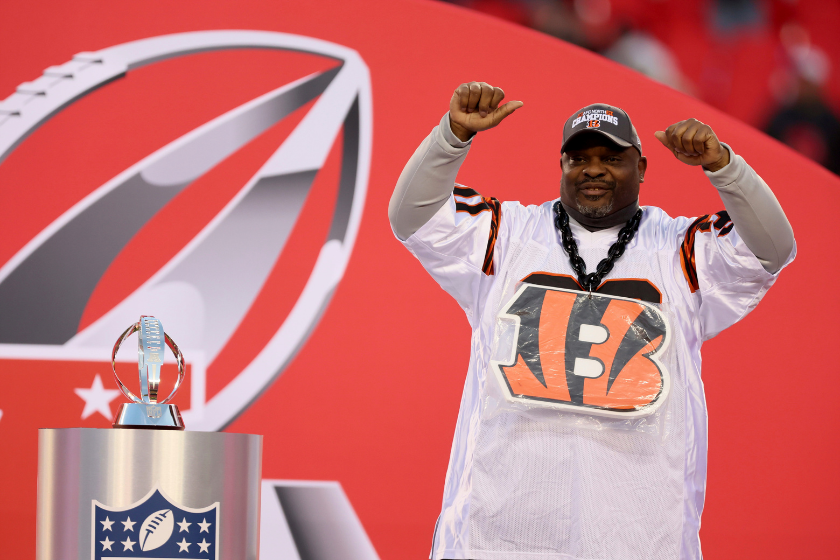 These days, Woods primarily spends his time as a spokesperson for the Javonte Woods Foundation -- a nonprofit dedicated to asthma education and advocacy. Ickey and his ex-wife Chandra started the organization after their 16-year old son Javonte tragically passed away from an asthma attack.

Additionally, Woods is the owner and coach of Cincinnati Sizzle. The Sizzle play in the full-contact Women's Football Alliance. He founded the team in 2003.

Woods also worked a variety of jobs such as a steak salesman, car salesman and home security system salesman before settling into his current commitments.

Ickey Woods will assuredly be in Los Angeles to watch the Bengals take on the Los Angeles Rams in Super Bowl LVI. Don't be surprised if a Bengal pulls out the Ickey Shuffle.

MORE: Who is Boomer Esiason's Wife?