The Bears dominated opponents that season, losing just one regular season game to the Dan Marino-led Miami Dolphins before coasting through the playoffs and pummeling the New England Patriots in Super Bowl XX. What made this team so lovable and exciting was the characters on it.

For starters, McMahon was the self-described "Punky QB" who during Super Bowl week mooned media and publicly urinated. GQ even said "no one as proudly and publicly vulgar as McMahon had come along before" the then-26-year-old passer from BYU did. And I'm not sure anyone ever matched him.

The Bears that year captivated NFL fans by going 15-1 and launched themselves into a national spotlight when they released "The Super Bowl Shuffle" on December 3, 1985.

How The Super Bowl Shuffle Was Born

The Chicago Bears Shufflin' Crew released their hit rap song two months before winning the Super Bowl, which made it the ultimate betting-on-yourself ballad in sports history.

So just how did the song come about? It possibly began with a fan.

Some believe a Bears die-hard by the name of Randy Weigand had the idea. His cheerleader girlfriend at the time, Courtney Larson, introduced them to Bears wide receiver Willie Gault. From there, Gault convinced the guys to join him on stage for an iconic hit that became a radio sensation. Only one player, defensive end Dan Hampton, refused to partake because he thought it would make the team look cocky. Grantland's version of the story doesn't mention the fan, though.

Gault took the idea to Red Label Records in Chicago, which was owned by Richard Meyer. The wide receiver had already appeared in a music video for the label and pitched the Super Bowl shuffle idea. Next thing everyone knew, players were playing drums, saxophones and guitars in a music video.

It Became a Hit Song 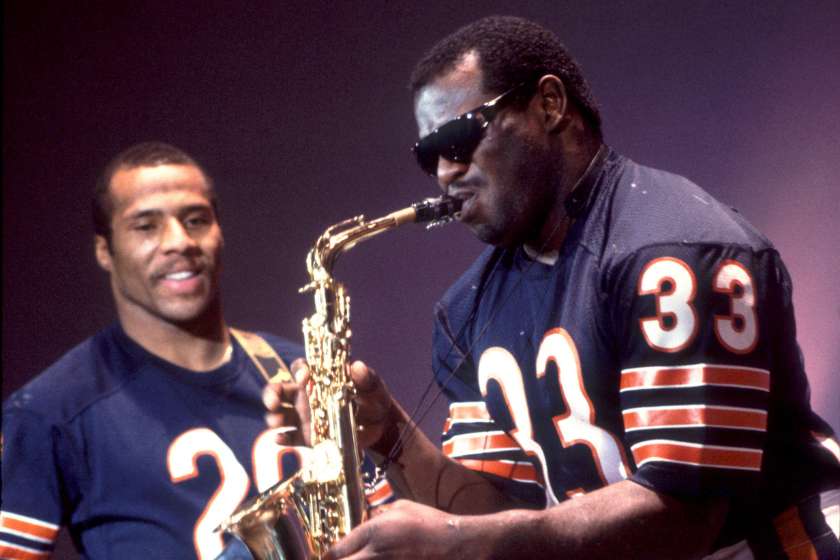 No sports team had ever done something like this, and they certainly never saw the same success that the 1985 Bears did when they recorded "The Super Bowl Shuffle."

After being released in December 1985, the funky track made its way to the Billboard Hot 100, peaking at No. 41 in February 1986. It also sold more than 500,000 copies. The song earned a Grammy nomination for Best R&B Performance by a Duo or Group but lost to Prince's "Kiss."

Let it be known that you can beat the Patriots, but you can't beat Prince.

The music video was hilarious, too. I mean, when else can you see Walter Payton grace a microphone with his sweetness? And who can forget McMahon and those black shades?

What's cool about the song is that it produced more than $300,000 in profits that were donated to the Chicago Community Trust to help Chicago families in need. Payton mentions it in his line, "Now we're not doing this because we're greedy, the Bears are doing it to feed the needy."

Controversy surrounded the song four years later when six of the performers (Richard Dent, Jim McMahon, Otis Wilson, Willie Gault, Mike Richardson and Steve Fuller) filed a lawsuit against Julia Meyer and the Renaissance Marketing Corporation, who licensed the song. They argued proceeds should benefit charities like it was originally intended to.

Other NFL teams tried to replicate the song's success. The 1986 Los Angeles Rams released "Ram It" the following season. The 2010 Minnesota Vikings received their own Prince song, "Purple and Gold," after beating the Dallas Cowboys but lost in the playoffs. Meek Mill put together a song for the Eagles after their most recent Super Bowl win. Notably, some teams have never dabbled in the music scene, like the Green Bay Packers, Indianapolis Colts and Cincinnati Bengals. Still, nothing stacked up to what the Bears football team had done.

Honestly, the Bears probably could have also performed at halftime of Super Bowl XX and still beat the Patriots by double-digits. 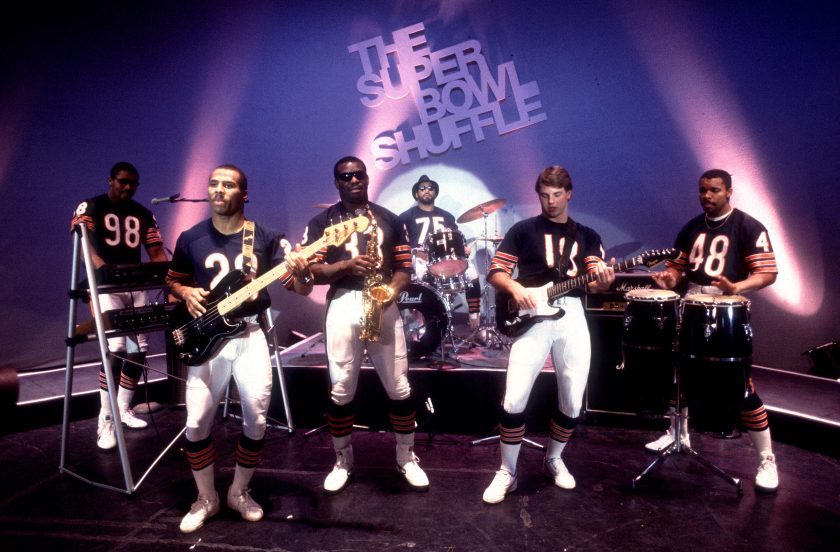 The song's lyrics were written to fit each of the player's playing style and personality. Written by Richard E. Meyer, Bobby Daniels and Melvin Owens, they absolutely nailed each of the Bears.

My favorite line may just be Perry's part when he calls himself "the Fridge" and says he's "no dumb cookie" while rapping. It's the perfect sing-a-long for a fun karaoke night.

We are the Bears Shufflin' Crew
Shufflin' on down, doin' it for you
We're so bad, we know we're good
Blowin' your mind like we knew we would
You know we're just struttin' for fun
Struttin' our stuff for everyone
We're not here to start no trouble
We're just here to do the Super Bowl Shuffle

[Walter Payton]
Well, they call me Sweetness
And I like to dance
Runnin' the ball is like makin' romance
We've had the goal since training camp
To give Chicago a Super Bowl champ
And we're not doin' this
Because we're greedy
The Bears are doin' it to feed the needy
We didn't come here to look for trouble
We just came here to do
The Super Bowl Shuffle

[Willie Gault]
This is Speedy Willie, and I'm world class
I like runnin' but I love to get the pass
I practice all day and dance all night
I got to get ready for the Sunday fight
Now I'm as smooth as a chocolate swirl
I dance a little funky, so watch me girl
There's not one here that does it like me
My Super Bowl Shuffle will set you free

[Mike Singletary]
I'm Samurai Mike, I stop 'em cold
Part of the defense, big and bold
I've been jammin' for quite a while
Doin' what's right and settin' the style
Give me a chance, I'll rock you good
Nobody messin' in my neighborhood
I didn't come here lookin' for trouble
I just came to do The Super Bowl Shuffle

[Jim McMahon]
I'm the punky QB, known as McMahon
When I hit the turf, I've got no plan
I just throw my body all over the field
I can't dance, but I can throw the pill
I motivate the cats, I like to tease
I play so cool, I aim to please
That's why you all got here on the double
To catch me doin' the Super Bowl Shuffle

[Otis Wilson]
I'm mama's boy Otis, one of a kind
The ladies all love me
For my body and my mind
I'm slick on the floor as I can be
But ain't no sucker gonna get past me
Some guys are jealous
Of my style and class
That's why some end up on their [whistle]
I didn't come here lookin' for trouble
I just get down to The Super Bowl Shuffle

[Steve Fuller]
They say Jimbo is our man
If Jimmy can't do it, I sure can
This is Steve, and it's no wonder
I run like lightnin', pass like thunder
So bring on Atlanta, bring on Dallas
This is for Mike and Papa Bear Halas
I'm not here to feather his ruffle
I just came here to do
The Super Bowl Shuffle

[Mike Richardson]
I'm L.A. Mike, and I play it cool
They don't sneak by me cause I'm no fool
I fly on the field and get on down
Everybody knows I don't mess around
I can break 'em, shake 'em
Any time of day
I like to steal it and make 'em pay
So please don't try to beat my hustle
Cause I'm just here to do
The Super Bowl Shuffle

[Richard Dent]
The sackman's comin', I'm your man Dent
If the quarterback's slow
He's gonna get bent
We stop the run, we stop the pass
I like to dump guys on their [whistle]
We love to play for the world's best fans
You better start makin'
Your Super Bowl plans
But don't get ready or go to any trouble
Unless you practice
The Super Bowl Shuffle

[Gary Fencik]
It's Gary here, and I'm Mr.Clean
They call me "hit man"
Don't know what they mean
They throw it long and watch me run
I'm on my man, one-on-one
Buddy's guys cover it down to the bone
That's why they call us the 46 zone
Come on everybody let's scream and yell
We're goin' to do the Shuffle
Then ring your bell

[William "Refrigerator" Perry]
You're lookin' at the Fridge
I'm the rookie
I may be large, but I'm no dumb cookie
You've seen me hit, you've seen me run
When I get the pass, we'll have more fun
I can dance, you will see
The others, they all learn from me
I didn't come here lookin' for trouble
I just came here to do
The Super Bowl Shuffle

This post was originally published on June 15, 2020 but a song like this deserves to be heard year-round.

MORE: What Happened to William "The Refrigerator" Perry?