Jason Taylor Dominated Football for Years, But Where Is He Now? 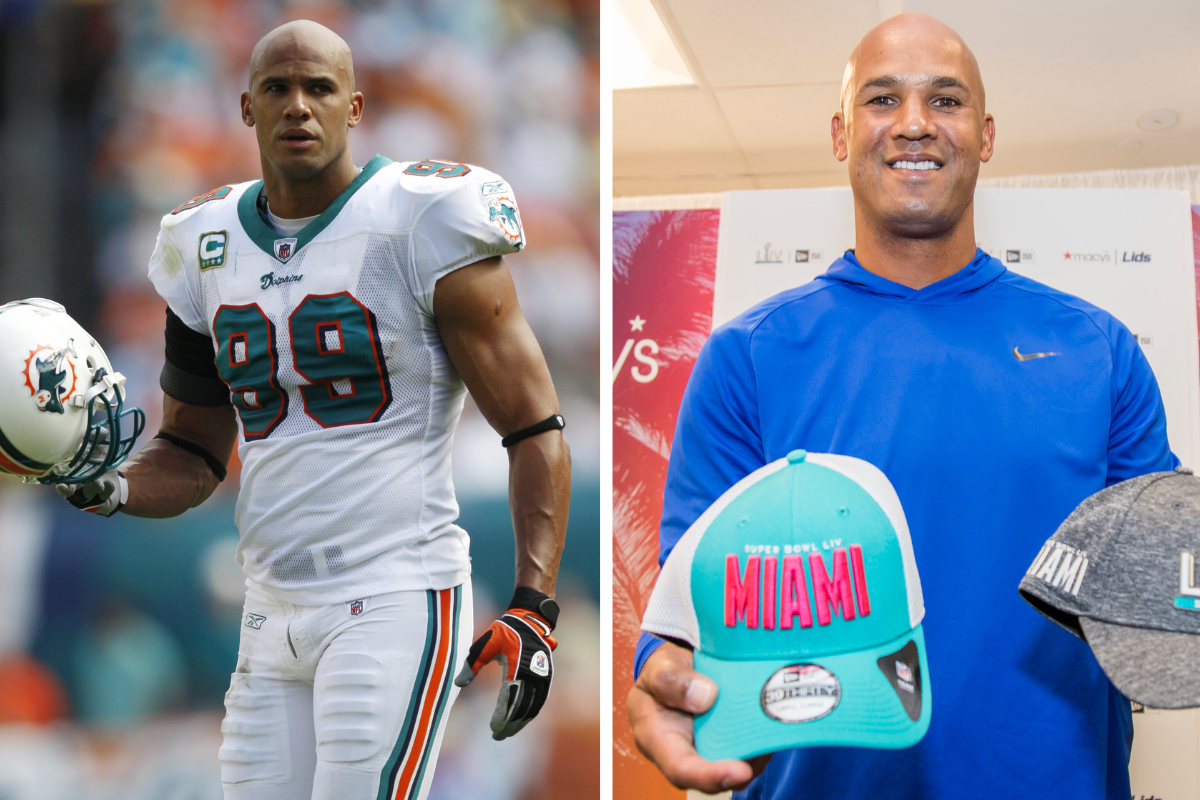 Jason Taylor was known for his ferocious play during his 15 years as a defensive end in the NFL. His 139.5 sacks rank seventh on the all-time list, and a generation of Miami Dolphins fans remembers him fondly.

Although his playing days ended as a 38-year old in 2011, he has been able to remain close to the game and take on a new challenge. He was promoted to defensive coordinator at St. Thomas Aquinas High School in Fort Lauderdale.

An added treat for Taylor is that he will still be able to coach his sons, Isaiah and Mason.

This is not Jason Taylor’s first foray into coaching. He has been a member of the St. Thomas Aquinas Raiders staff since 2017, working with the team’s defensive line.

In his first three seasons, the Raiders thrived, winning 41 games and dropping a mere six contests.

In 2019, the football team went undefeated, won a Class 7A state championship, and was named GEICO National Champions.

Off the field, he even helped stop a burglary at the high school last year. Taylor and former NFL player/fellow coach Twan Russell confronted a man named Kendrick Freeman and detained him until police arrived.

PURSE SNATCHER TACKLED – The St. Thomas Aquinas High School football coaches stopped a man who allegedly trespassed on school property and stole a purse from a teacher. One of those coaches is former Miami Dolphins player Jason Taylor. https://t.co/pJe2Dk1frK

New cases of COVID-19 have continued to surge in Florida and the 2020 season was initially delayed due to the coronavirus pandemic, but the Raiders have returned to the field in hopes to continue their quest for a title defense with as few roadblocks as possible.

With a former Florida International quarterback running the offense and a Pro Football Hall of Fame inductee controlling the defense, it is no wonder why this Raiders team has been immensely successful in recent years.

A coach-player relationship that doubles as a father-son relationship can be incredibly rewarding, especially when the coach is a former stalwart on an NFL defensive line.

Isaiah Taylor, a safety in his senior year, has been a boon on defense while working under his dad. Last year, he made 50 tackles, caught two interceptions, and followed in his father’s footsteps with four sacks. Kansas, Maryland, and Minnesota have all offered him a scholarship.

Isaiah’s brother, Mason Taylor, is a junior tight end. He did not collect any reception last year, but FIU has still given him an offer.

Another 2022 talent from Fort Lauderdale St. Thomas Aquinas is TE/WR Mason Taylor 6‘3“ 205. Strong, physical with good hands. Has the frame to weigh 240.@MasonTaylor52 3.1 GPA his father is Jason Taylor and uncle Zach Thomas. Certainly has the bloodlines. pic.twitter.com/vr2Qkvp5En

Coaching your sons in high school football is a blessing, and if St. Thomas Aquinas can repeat as champions, the hope is that the Taylor brothers will be a big reason why.

Jason Taylor was born on September 1, 1974, in Pittsburgh, Pennsylvania.  He played his college football at the University of Akron and was selected by the Miami Dolphins in the third round of the 1997 NFL Draft

Taylor was a six-time Pro Bowler and was a part of three All-Pro teams. In 2006, he earned the honor of being named the NFL Defensive Player of the Year. He was a member of the Dolphins from 1997-2007 before making a one-year pit stop to the Washington Football Team, but the separation was not long-lived, as he was back in Miami in 2009.

Following another one-year deal with the New York Jets, he transitioned into a linebacker role, and even as a part-time player, he recorded 36 tackles. This year was the closest he would ever get to the Super Bowl, losing to the Pittsburgh Steelers in the AFC Championship game.

Finally, he reunited with the Dolphins once more in 2011 and added seven more sacks to his ledger.

In addition to the aforementioned gaudy sack totals, he holds the NFL record with 46 forced fumbles, nine of which came in that historic 2006 season. Taylor participated in nine playoff games and was a part of the last Dolphins team to win a postseason contest, way back in 2001.

For his accomplishments, he enshrined in Canton, Ohio, and elected to the Pro Football Hall of Fame in 2017.

On this day in 2012, @JasonTaylor is carried off the field by his teammates in the final game of his record-setting career. #FinsUp pic.twitter.com/sPHW0OMfA1

The football program at St. Thomas Aquinas is already impressive, but with NFL Hall of Famer Jason Taylor commanding the whole defensive unit, it would not be foolish to suggest that they will reach a new level of success.