We grow up being told to be the best we can be and do the best we can. For some of us, that includes being perfectly average, and there is nothing wrong with that. I would say it's the best place to be, actually. There are no expectations to live up to and few shortcomings to succumb to. Nope, it's all about the sweet spot that is the middle ground, and there is no person who better ruled over this area in the football world than Jeff Fisher.

Fisher was able to land head coaching gig after head coaching gig while living smack dab in the middle of the pack. Now, he's back on the sidelines after a five-year hiatus to coach the Michigan Panthers of the USFL.

Let's take a look back at his coaching career to see how he got to this point. 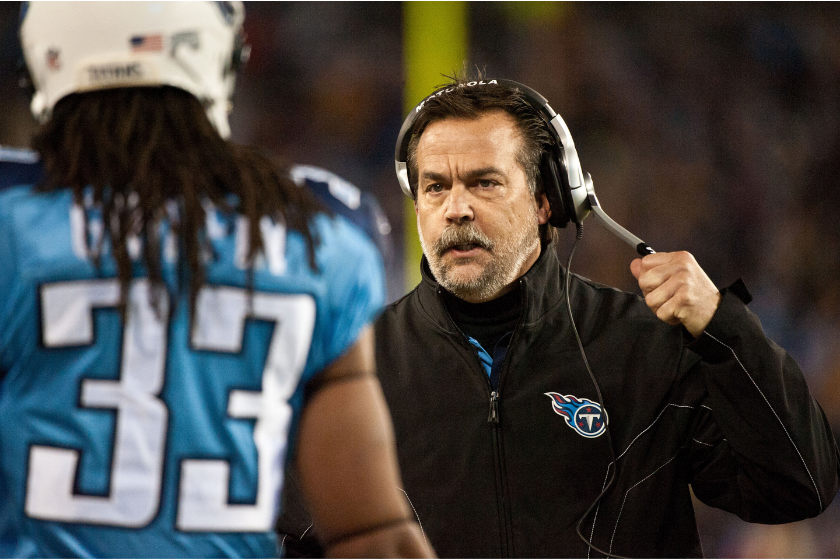 RELATED: The 9 Youngest NFL Coaches in History Include a Few Legends

Jeff Fisher grew up near Culver City, California and stuck around his stomping grounds to play college football at USC. As a defensive back, Fisher was a member of the Trojans' 1978 national championship team. He went on to enjoy a five-year career with the Chicago Bears in the NFL, where he was a part of the squad that won Super Bowl XX.

It was their Super Bowl season, 1985, that Fisher got his start in coaching. He badly hurt his ankle early in the year and spent the rest of the campaign as a defensive assistant under head coach Mike Ditka. He subsequently called it on his playing career, but his coaching career was only beginning.

He joined the Philadelphia Eagles coaching staff as a defensive back in 1986 and worked his way up to defensive coordinator by 1989. He had additional pit stops with the Los Angeles Rams and San Francisco 49ers before getting his first head coaching opportunity with the Houston Oilers.

Oilers head coach Jack Pardee was let go 10 games into the 1994 season and Fisher, the defensive coordinator, was made the interim head coach. Despite leading the team to a 1-5 record, Fisher was made the permanent head coach. He held the job when the team moved from Houston to Nashville in 1997 -- they were originally the Tennessee Oilers but changed their name to the Tennessee Titans in 1999 -- and had the most successful stretch of his career in Music City.

Thanks to picking up quarterback Steve McNair and running back Eddie George in '95 and '96 NFL Drafts, the Titans hit their stride the year they changed their name. They went 13-3 and made a run through the AFC playoffs to Super Bowl XXXIV (the "Music City Miracle" certainly helped).

From that point on, Tennessee was up and down. They had their fair share of double-digit win seasons combined with 7 and 8 win campaigns with some sub-six win seasons sprinkled in there. How did his record in Nashville turn out with such a wide array of finishes? 142-120 (.542). Fisher and the Titans parted ways following the 2010 season and 16 years at the helm.

The head coach took 2011 off and picked up a new gig with the St. Louis Rams. Fisher never won more than seven games in a season during his five seasons with the Rams. He captained the ship when the team moved from St. Louis back to Los Angeles in 2016, but following a 4-9 record through 13 games, the Rams let him go.

He left the NFL having the most losses (165) by a head coach in league history.

That brings us to the present. The former NFL head coach went off the grid before joining Eddie George's Tennessee State staff as an advisor in 2021. He'll return to the sideline as the head coach of the United States Football League's Michigan Panthers for the 2022 season.

Fisher is one of many notable names that will be leading the revamped USFL. Others include Skip Holtz (Lou Holtz's son) of the Birmingham Stallions, Mike Riley of the New Jersey Generals, Kevin Sumlin of the Houston Gamblers, Todd Haley of the Tampa Bay Bandits, Larry Fedora of the New Orleans Breakers and Bart Andrus of the Philadelphia Stars.

Offshoot pro football leagues are hard to predict because everything is new. However, as a betting man, seeing how there are only 10 games in the season, I'm going to go out on a limb and say the Panthers will finish 5-5. For Fisher, a .500 record is par for the course.

MORE: Steve McNair's Death Left Behind a Family Who Now Makes Him Proud