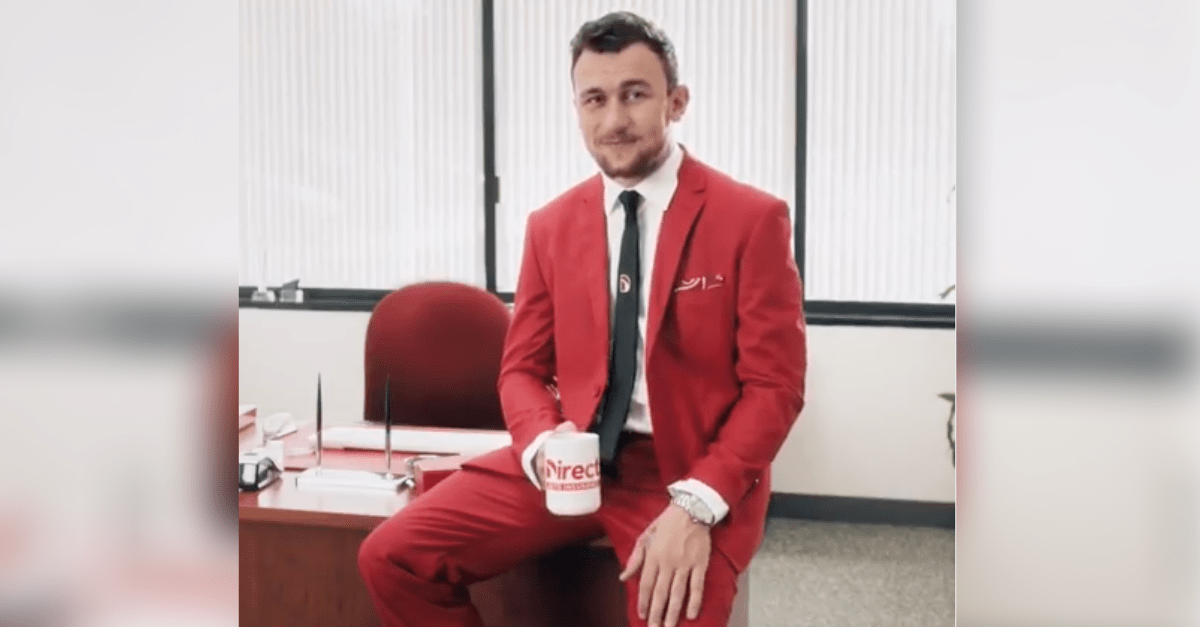 Johnny Manziel was a god. I was in college when the Texas A&M star dominated college football, upset the mighty Alabama Crimson Tide, and became the hottest thing since the bacon toaster. The former Heisman Trophy winner was can’t-miss television, and despite concerns about his life off the football field, the Cleveland Browns made him the 22nd overall pick in the 2014 NFL Draft.

Then, the world came crashing down on Johnny Football.

It seems like options are limited for the 26-year-old Texan. The new and improved XFL is on the horizon, but Manziel’s magic that made him a legend in College Station looks completely gone, which begs the question: is pro football officially done with Johnny Football?

Well, Manziel may have answered that question himself after releasing a commercial promoting Direct Auto Insurance on his Instagram account. Dawning a red suit and workman-like demeanor, Manziel began the promotional advertisement by saying something we’ve never heard before.

Who’s ready for some football? During the offseason, I had some time to hang with my friends at @DirectAutoIns. They’ll look past your past and help you get the car insurance you need #Ad

Was that it? No offseason fanfare or grand farewell? No money sign? With an emphatic “EX-pro football player,” did the free agent and former first-round pick really just retire using an insurance commercial?

Manziel jokes about how he “knows what it’s like to not know where your next paycheck is coming from.” While that’s about as accurate as he’s ever been, Manziel’s apparently ready to let Direct Auto cover him for life after being an NFL player.

And honestly, it’s probably about time.

Manziel was fined $12,000 for flipping the bird during a preseason game his rookie year. That should have been a precursor to the problems that loomed, but the Browns stood by their future superstar. Manziel appeared in 15 games over two seasons, threw the same number of touchdowns (7) as interceptions (7), and only managed one rushing touchdown. Manziel suffered a concussion and missed the final game of the 2015 season, was reportedly partying in Las Vegas instead of being with his teammates that weekend, and was released in February 2016 after an investigation into an assault charge.

Johnny Football played in something called The Spring League, signed with the Canadian Football League’s Hamilton Tiger-Cats in 2017, was traded to the Montreal Alouettes, stunk it up, then was released after he “contravened the agreement which made him eligible to play” in the CFL.

Eight pass attempts and one interception with the Alliance of American Football’s Memphis Express was the last we saw of Johnny Manziel before the AAF’s collapse.

I don’t know a football team really needs or wants Johnny Manziel. For an Aggie legend who let social media stardom ultimately ruin his career, there would be something poetic about Manziel fading into retirement with a subtle, but sweet, goodbye if this really is the case.