Panthers Lineman Gets Caught Sleeping on the Sideline 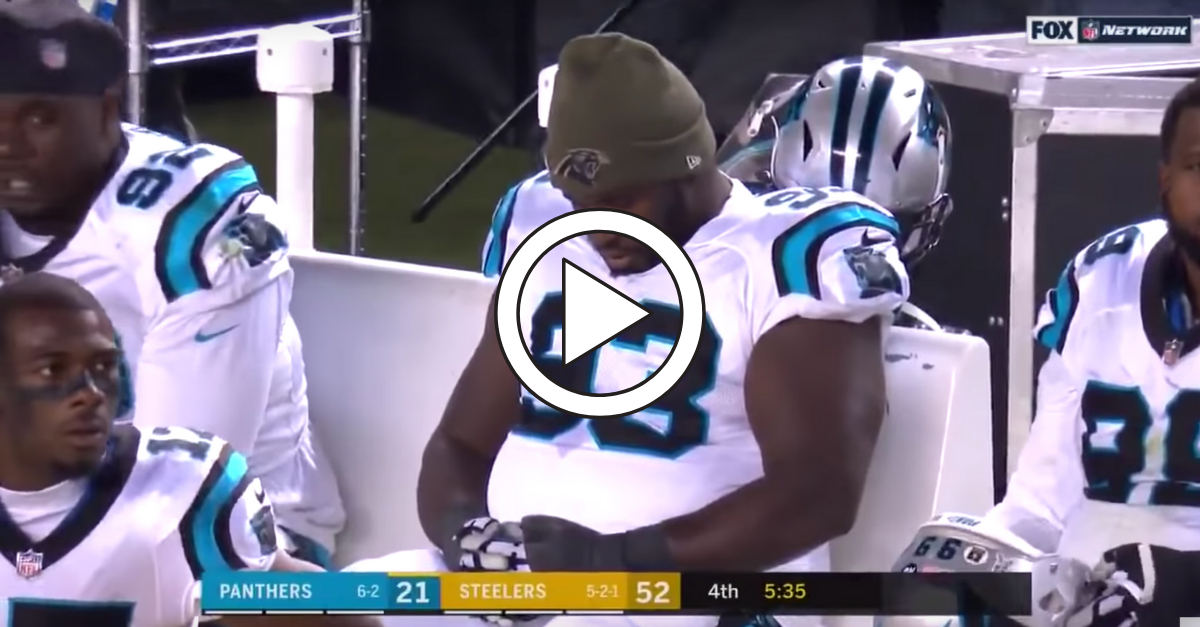 With 5 minutes, 35 seconds remaining in yet another weird Thursday Night Football game, one that turned out to be far from competitive at all, one Carolina Panthers player was caught on camera taking a little nap before a timeout during the fourth quarter.

Perhaps defensive tackle Kyle Love had seen enough in the 52-21 blowout loss to the Pittsburgh Steelers at Heinz Field. Maybe he was just in deep meditation trying to figure out what went wrong. Regardless, the 6-foot-1, 310-pound veteran got caught snoozing on the sidelines.

How in the world does someone fall asleep at their job when it is at a loud NFL stadium? It’s the ultimate “C’mon man” moment and it went viral on social media.

The game was ugly well before the Panthers defensive lineman took a nap, too.

After Carolina took an early 7-0, Pittsburgh rattled off 24-straight points, including 21 in the first half, with a Ben Roethlisberger 75-yard bomb to JuJu Smith-Schuster, a Vince Williams pick-six off Cam Newton, a James Conner rushing touchdown, and a Chris Boswell field goal.

Big Ben finished his night early, completing 22 of 25 passes for 328 yards and five touchdowns, but he wasn?t napping.

The Panthers were trailing the rest of the game, but Christian McCaffery found the end zone three times and wasn?t found napping.

Nobody was napping except for Kyle Love, which makes the video as good as gold.

A lot of credit goes to the NFL Network for finding it, too, and the Tim McGraw song playing in the background only adds to the dramatics.

In many ways, though, finding a player sleeping during a TNF game is almost very fitting. Whether it?s the matchup or the lopsided score, they have been rather lackluster all season long.

Carolina Panthers defensive tackle Kyle Love was how everyone watching the game at home felt, but only the former Mississippi State Bulldogs standout got paid for it.

It’s one thing for a member of the Carolina Panthers defense to sleep in the film room back home in Charlotte — or any NFL players, for that matter — but to do it on national television?

That trending video clip will never go out of style.

MORE: No Bromance Will Ever Be Stronger Than the Watt Brothers