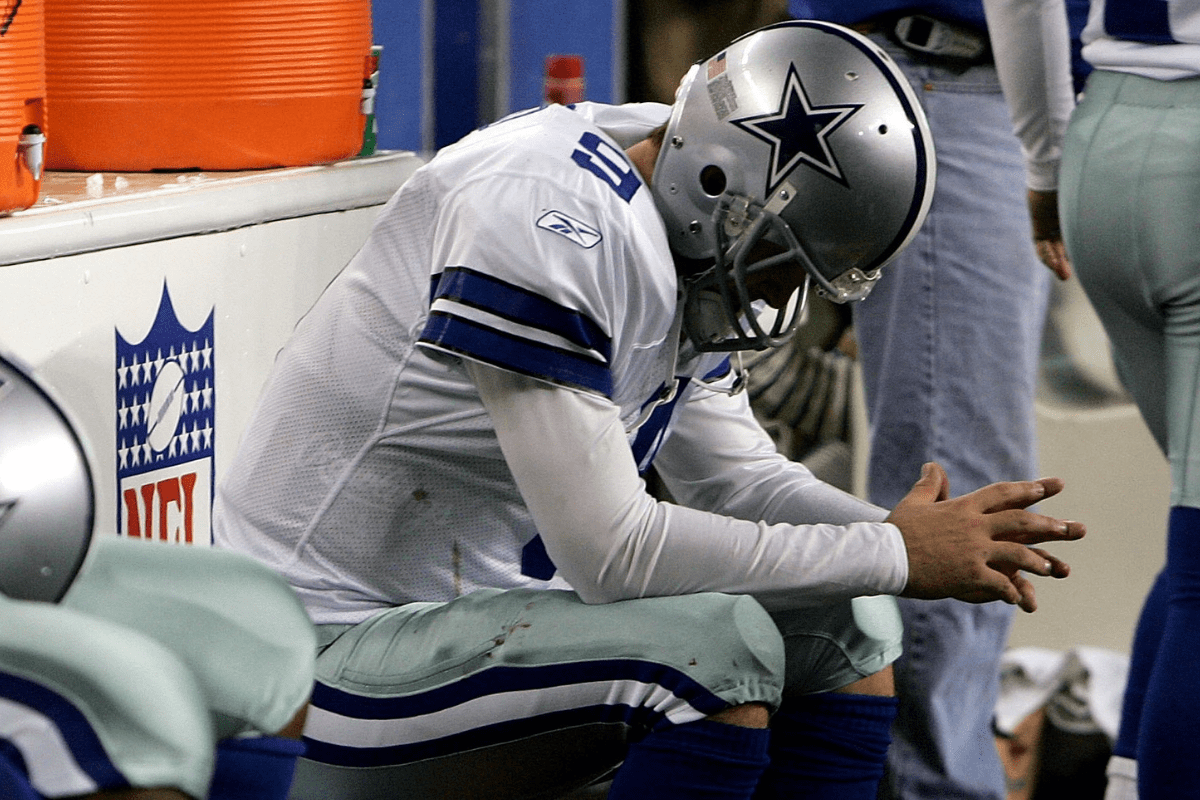 Your team is down by a field goal with a minute remaining in the game. If you’re the Kansas City Chiefs or Tampa Bay Buccaneers, you have to like your chances. Patrick Mahomes can do it all and Tom Brady can never be counted out.

What separates Mahomes and Brady from their peers is they play their best football in the NFL Playoffs. Mahomes needed only 13 seconds to set up a tying field goal as time expired against the Buffalo Bills in the 2021 AFC Divisional Round. He then went on to lead the game-winning drive in overtime to cap one of the greatest games the NFL has ever seen.

Brady has broken the hearts of several fan bases across the league for his ability to prevail in crucial situations. He finds a way to win even when the chips are stacked against him.

While Mahomes and Brady rise to the occasion in dire moments, some guys need the Heimlich Maneuver. These are the guys who shrink when they’re needed most, particularly in the postseason.

Let’s take a look at six players you want as far away as possible when your team needs a big play in the playoffs.

I’m convinced every Wild Card weekend in the 2010s opened with the Cincinnati Bengals. Andy Dalton was the star of the Saturday matinee. For any non Bengals fan, the cheap ticket was a great deal for watching the Red Rifle implode.

For whatever reason, Dalton would have a solid regular season and stink in the playoffs. In four starts, which were all losses, he thew five interceptions to one touchdown and the Cincinnati offense never scored more than 13 points. Oof.

This one pains me because I’m a Jim Kelly fan. But, when your team reaches four straight Super Bowls and doesn’t win one, it’s hard not to look at the quarterback. Kelly had a hard time finding a rhythm on the game’s biggest stage. He threw seven interceptions to two touchdowns in Buffalo’s four Super Bowl appearances from 1990 to 1993.

It’s interesting to reflect on Kelly’s Super Bowl struggles because he had a Hall of Fame career otherwise. Not winning one ring in four tries has to be a statistical anomaly.

I did a quick Google search on Mike Vanderjagt. The fourth result is “Mike Vanderjagt idiot kicker.” It doesn’t take much to pull me in.

The quick backstory is Vanderjagt, then with the Indianapolis Colts, called out head coach Tony Dungy and Peyton Manning on a Canadian television station shortly after the Colts lost to the New York Jets in the 2002 playoffs. He was allegedly drunk.

Manning responded by referring to Vanderjagt as an “idiot kicker” in a sideline interview at the Pro Bowl. That’s the kind of team chemistry you love to see.

Anyway, Vanderjagt was awesome in the regular season, converting 86.5 percent of his field attempts during his career. However, he will forever be remembered as “Vanderchoke” for badly missing a 46-yard game-tying field goal late in the fourth quarter against the Pittsburgh Steelers in the 2005 AFC Divisional Round. He also got an unsportsmanlike conduct penalty for smashing his helmet on the ground after.

The miss was shocking because Vanderjagt entered the game as the NFL’s all-time leader in field goal percentage. He couldn’t come through when it mattered most for a team that was more than capable of winning the Super Bowl.

Back in 2006 against the Seattle Seahawks, all Tony Romo had to do was cleanly hold a snap for a 19-yard field goal and the Dallas Cowboys would get their first playoff win in a decade.

Instead, the Cowboys quarterback fumbled the snap and attempted to rush for a touchdown to save face. He was tackled at the last second and the iconic photo of him hanging his head in shame was born.

Combine the infamous blunder with the fact that Romo completed 61 percent of his postseason passes and only won two playoff games during his time in Dallas, and you have someone who couldn’t figure it out in clutch moments.

Marino is undoubtedly one of the best quarterbacks of all time. However, the quality of his game diminished come the playoffs. Marino went 8-10 in the postseason during his career and only got past the Divisional Round when the Miami Dolphins lost to the San Francisco 49ers in Super Bowl XIX.

Marino threw 32 touchdowns against 24 interceptions while only completing a shaky 56 percent of his passes in the playoffs. It also doesn’t help that his last postseason game, and the last game of his historic career, was a 62-7 clowning at the hands of the Jacksonville Jaguars.

If Marino was able to be more consistent in January and win a Super Bowl, he would’ve had a real shot at being the GOAT.

The Seahawks must have a thing for making special teams players mess up. Blair Walsh hit three field goals to give the Minnesota Vikings a 9-0 lead against Seattle in a 2015 NFC Wild Card game. Then, Russell Wilson led the Hawks to 10 unanswered points and the Vikings responded by setting up Walsh for a 27-yard go ahead field goal with 26 seconds left in the fourth quarter.

Blair completely hooked it left. Seattle took over and Wilson took a knee to secure the victory. Botching a 27-yard chip shot, which should be automatic for any NFL kicker, is a brutal way to exit the playoffs.

MORE: The 5 Worst NFL Broadcasters of All Time, Ranked