The NFL's first of four games across the pond this season starred the Minnesota Vikings and the New Orleans Saints at Tottenham Hotspur Stadium, London. The teams competed to a sold-out crowd in London as the NFL continues its campaign to draw an international audience. The packed stands, and early morning risers stateside, started their day with more than an alarm clock dinging. They were gifted the rare double doink. I mean it's not the best impression to send to our new British fans, but it'll make for a fun story.

The Double Doink Heard 'Round the World

The Vikings win on the DOUBLE DOINK ?

The score was 28-25 with only seconds remaining in the game, and Saints kicker Will Lutz's leg was in control of New Orleans' overtime hopes. Lutz successfully kicked from 60 yards only a few minutes earlier, before this -- his final, and potentially game-tying, 61-yard attempt. But his kick was no match for the uprights and it wasn't enough to tie up the close game. And sure, missed field goals happen all the time in the NFL, but a doink with :02 seconds left, let alone a double doink -- it was a rare finish.

It was so comically beautiful for Vikings fans and heartbreaking for Saints fans -- let's look at it from another angle and in slow-mo. I mean, it would be rude not to.

This angle of the double doink is incredible. pic.twitter.com/dUeIvgKTDj

Imagine what a terrible way it was to start your day in Louisiana, waking up to catch an 8:30 a.m. kickoff -- only to wish you'd stayed in bed.  On the flip side, if you're a Vikings fan, what a wildly exciting way to start your football Sunday.

A DOUBLE DOINK. THE VIKINGS BEAT THE SAINTS, 28-25. Good lord, it's not healthy to start a day that way.

The @TedLasso cast having a blast at the Vikings-Saints game in London ???pic.twitter.com/lR5a9FAiqH

Quite a few famous footballers were in the crowd, lucky enough to witness the magical double doink in person. 'Football is life' for the beloved AFC Richmond team, who, fictional or not, know a thing or two about kicking. (A lot of the cast were pro players for the "other football.") The Ted Lasso soccer-centered cast was living its best life at the London game.

Ted Lasso has become beloved around the world. There was something so perfect about American football and the world's favorite football colliding in London for the NFL's first overseas game of the season . The players were just as into it as the fans, and Vikings wide receiver Adam Thielen was more than ready -- from head to toe -- to meet the moment.

The perfect cleats for playing in the UK ? (via @NFL) pic.twitter.com/8bLJQpkUsK

Double Doinks and Ted Lasso? How did we get so lucky? The NFL's twitter background image was quickly changed to the AFC Richmond family celebrating during the Saints+Vikings action. And fans were equally losing their collective minds over the double doink and the fact that the cast of Ted Lasso was in the stands supporting the London-played game. Here are some of the best tweets from the Tottenham Hotspur entertainment.

Ted Lasso in a WNBA hoodie at the London NFL game ? pic.twitter.com/cv22cOqHox

Believe in the Double Doink 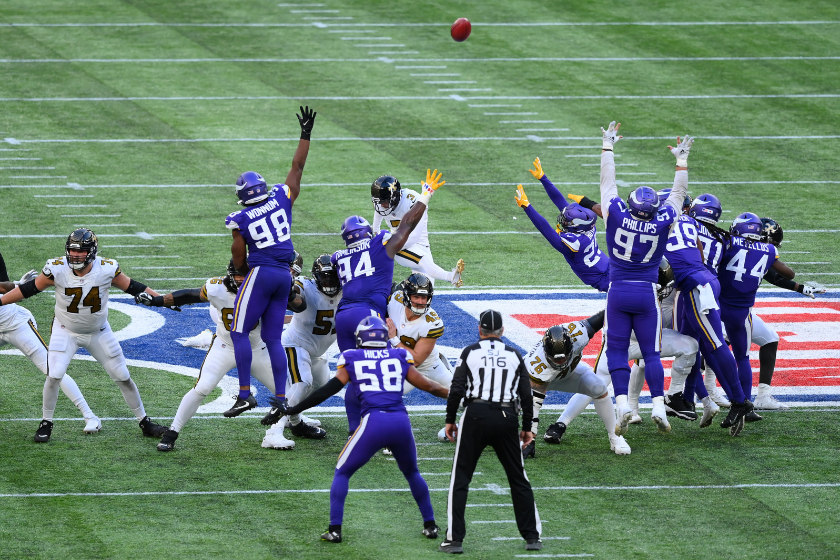 While I'm sure Lutz and the New Orleans Saints would like to completely forget Sunday's game, the rest of us are grateful for all of the joy the double doink brought into our Sunday Football lives. Thanks to Sunday's Twitter reactions we'll forever be able to relive the unbelievable finish of Week 4's Vikings win over the Saints. Long live the double doink.