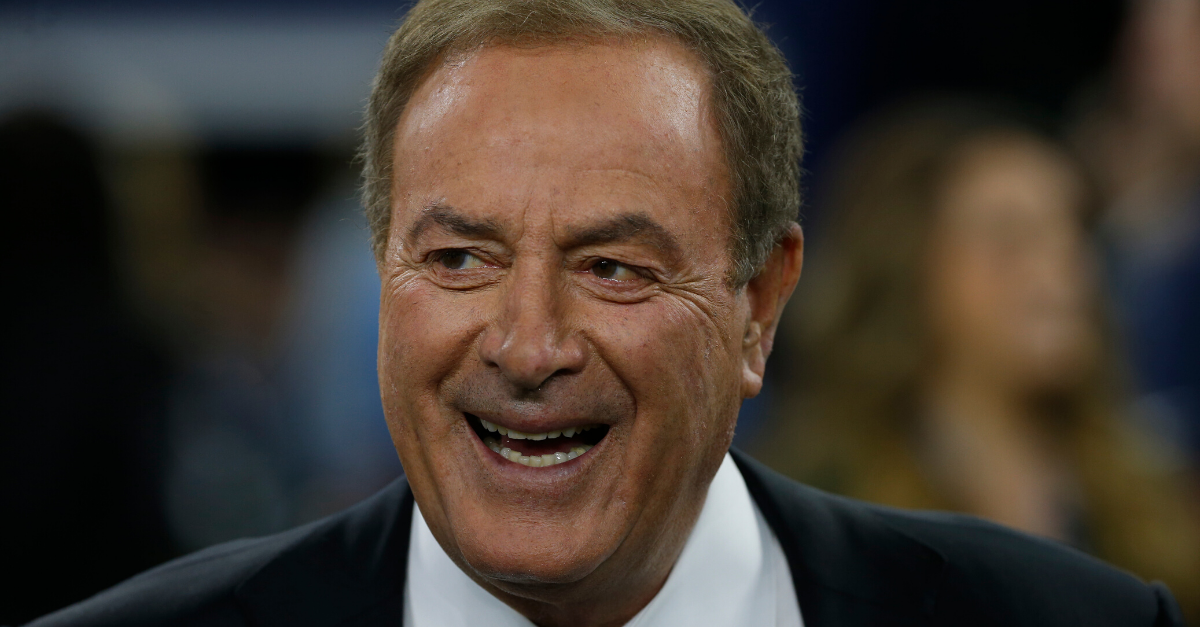 In football, the only thing tougher than watching a lopsided game is having to talk about it. There is really only so much an announcer can say to keep it entertaining. That was especially true when the Kansas City Chiefs put it on the Chicago Bears during Sunday Night Football, but the legendary Al Michaels found something to get excited about.

Early in the fourth quarter, after Chiefs quarterback Patrick Mahomes found running back Damien Williams for a 14-yard touchdown to go up 23-3, kicker Harrison Butker lined up for the extra point attempt. Nothing about this sounds too wild at first, but the PAT definitely got a rise out of the 75-year-old Michaels.

The snap was good. So was the hold. However, the ball hit off both uprights at Soldier Field and the kick was no good. The only thing that made it better was the call on NBC.

Al Michaels was so excited about the double doink. Warms my heart. pic.twitter.com/3Dkt8x2r6w

Al Michaels is a professional. He?s been calling NFL games alongside Cris Collinsworth for years. So it didn?t matter if the Bears were getting pummeled, he wasn?t going to let that get in the way of doing his job at a high level.

?Harrison Butker now for the extra point. Off the upright, AND THAT?S A DOUBLE DOINK RIGHT THERE, and no good. This time it hits two uprights, not an upright and the crossbar. Same end zone. Only because Collinsworth is here.?

Michaels knows all about the double-doink. Tragically, so do Bears fans. They all witnessed one of the craziest ones in history when Bears kicker Cody Parkey missed a field goal attempt against in the Philadelphia Eagles in the NFC Wild Card playoff game last season.

Some painful memories from last year probably came back when the football hit off the left upright. This kick didn?t end the Bears? season, though. It was actually in favor of head coach Matt Nagy?s squad. But at the end of the day, it didn?t matter.

The SNF matchup was one-sided from the start. It certainly didn?t help Bears quarterback Mitchell Trubisky was very average, either. The game was a dude, but this call made it all worth it.