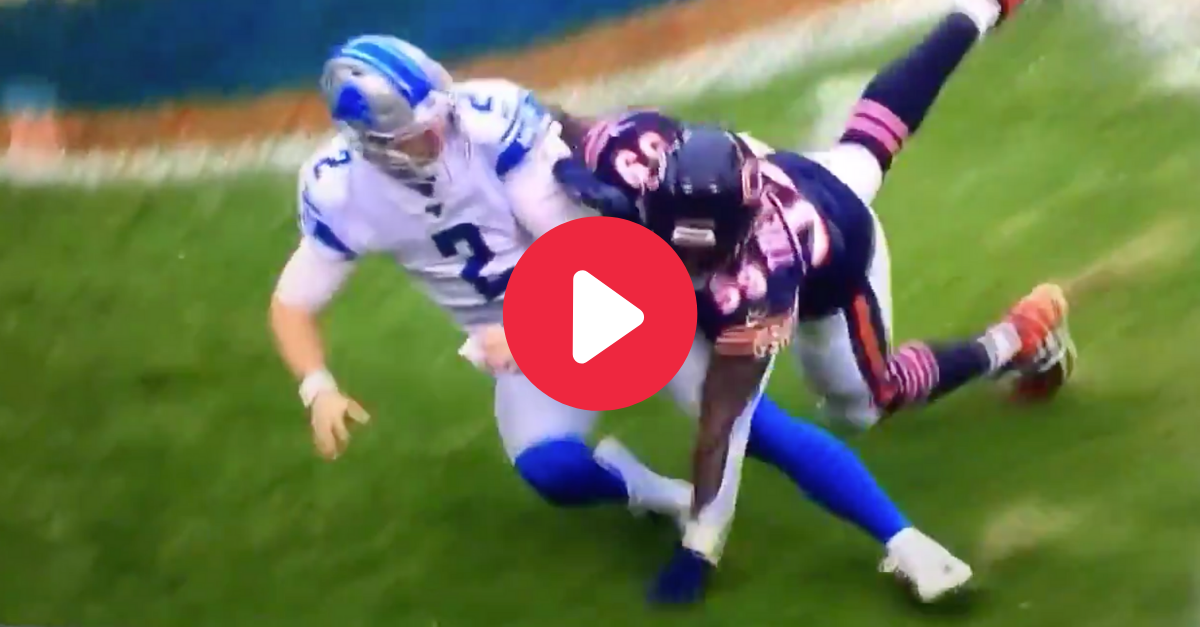 If you are a Chicago Bears fan, Sunday?s game against the Detroit Lions was supposed to be a sigh of relief. A 20-13 victory meant a three-game losing streak was finally over and people could stop complaining about head coach Matt Nagy and quarterback Mitch Trubisky, at least for one day. Unfortunately, there was no celebration because of a rather gruesome arm injury to one of the team?s best players.

In the first quarter, Bears inside linebacker Danny Trevathan chased Lions quarterback Jeff Driskel out of the pocket and forced him to throw the football away before taking him down. At first, it appeared to be a normal play in the NFL. But after watching the replay, it was anything but normal.

As the two players went down on Soldier Field, Trevathan extended his left arm to brace the landing. Unexpectedly, however, his arm bent the wrong way and caused a disgusting elbow injury.

Trevathan?s injury is obviously not good for the Bears defense, who also lost starting defensive lineman Akiem Hicks to an elbow injury against the Oakland Raiders in London last month.

Nobody inside the Bears organization is talking very much about the gruesome elbow injury, but we can see it was awful. Trevathan went to the locker room and did not return to the NFC North showdown.

Nagy said placing the inside linebacker on injured reserve could be an option.

?It?s not real pretty, but it?s a part of this game,? Nagy said, via the Chicago Tribune. ?You hate to see that, so we?ll see how that goes moving forward.?

Before the left elbow injury in the Bears-Lions game, Trevathan had 70 tackles and one sack so far in 2019. He?s been a big part of the Chicago defense all year while competing in a tough division featuring the Green Bay Packers and Minnesota Vikings.

If he?s placed on injured reserve, Trevathan?s time with the Bears could be over. The former sixth-round pick in the 2012 NFL Draft is set to become a free agent this offseason.

However, let?s just hope Trevathan?s arm gets healed quickly before worrying about where he will play next season.