For Los Angeles Rams quarterback Matthew Stafford, the past couple of years have been a whirlwind. On the field, he suffered a back injury that ultimately ended his 11th NFL season. Off the field, his wife Kelly Stafford had surgery to remove a brain tumor. It's been hectic, no doubt, but life started to return to normal. Well as normal as things can be for an NFL player who just won the Super Bowl.

Before the coronavirus pandemic and COVID-19 outbreak, the Staffords enjoyed a nice family vacation at Disneyland in California. They took their three daughters -- twins Sawyer and Chandler, and Hunter -- and it was all smiles. They also made another big announcement on the trip.

Matthew and Kelly Stafford were expecting their fourth child over the summer and told the world in an Instagram post. By the end of June that year, they were proud parents of four beautiful children. 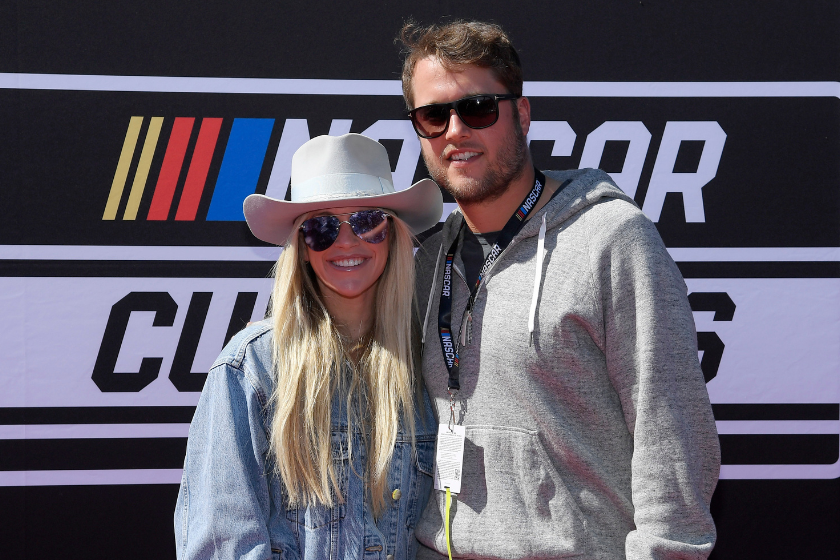 LA Rams QB Matthew Stafford, the first overall pick in the 2009 NFL Draft and former Detroit Lions quarterback, met his wife, Kelly Hall, at the University of Georgia. Matt was the starting quarterback for the Bulldogs and Kelly was a cheerleader. College football once again brings two lovebirds together.

The couple got married in April 2015.

It's safe to say the Stafford family has been through a lot, including trade rumors (and finally a trade) last offseason. Kelly Stafford even chimed in on her Instagram story saying she wouldn't mind Los Angeles if Detroit was done with her husband. Lions general manager Bob Quinn originally shut them all down to the Detroit Free Press, but ultimately traded him in January 2021.

All of that has settled, and the Staffords can enjoy everyday life now that they've left Michigan for Los Angeles with their four daughters. Kelly even started a weekly podcast in 2021 called "The Morning After With Kelly Stafford."

Still, Kelly's brain tumor diagnosis is a reminder to cherish life, especially with your children.

Back in 2019, Kelly endured a 12-hour surgery to remove a brain tumor. The tumor, which was benign, was what is called an acoustic neuroma sitting on her cranial nerves. An MRI revealed the tumor after she had experienced bouts of dizziness.

According to USA Today, doctors told her that "there was a 50 percent chance she could lose her hearing, as well as the possibility that she could lose facial function."

"When I went home to hug my girls after the diagnosis, I knew I needed to get through this. I tried not to go down the rabbit hole when it came to what was the worst. I wanted to focus on positivity," she wrote in an ESPN article.

Kelly said she had to relearn how to walk, and Matthew was right by her side for every exercise. Her message to other women, specifically mothers: Don't wait to get checked if something isn't right.

"If there's anything I want people to take away from my story, it's for mothers. If you ever feel the slightest bit off, you need to take the time to get it checked out," she wrote for ESPN. "You don't have to put everything on your back. Sometimes, you need to take some time to make sure you are OK."

When her husband received a false positive test for the coronavirus in August 2020, Kelly took out some anger on the NFL.

She described in an Instagram post how they were treated poorly after he was placed on the COVID-IR, including being approached in a grocery store and having her kids harassed. She was upset because the league released info that Matthew was positive, when he really was not.

"I would also like people to know..if you saw me out and about after this, it was because we already knew it was a false positive. We would never chance endangering anyone with this virus. If we have learned anything in the past two years, it's that we know the value of health and the health of others," she wrote on social media.

That wasn't the first time she made headlines during the coronavirus pandemic. In November 2020, Kelly caught heat after she compared the state of Michigan to a "dictatorship" on social media after the state's government imposed restrictions on in-person dining and bars as well as restrictions for classes in high schools and colleges. She also came under fire this season after throwing a pretzel at a 49ers fan.

Kelly Stafford is entitled to her opinion, but calling Michigan a ?dictatorship? is irresponsible. We have to sacrifice personal freedom to get this pandemic under control. The failure is our government has not adequately supported people enough to incentivize them not to work. https://t.co/b4ZrBRTYy1

"I'm going to be very blunt," she said in a now-deleted video. "I'm so over it. I'm over living in a dictatorship that we call Michigan. I understand there's a pandemic and I understand it's very scary. I'm scared of it, too. If you are at risk, do not leave your house until there's a vaccine.

"But shutting down these small businesses, things that people have worked their life for, shutting them down again is not the answer because they will not make it. And once we are able to leave our house, once this dictatorship decides to let us have some freedom, there will be nothing left."

Kelly issued an apology over her reaction to the COVID-19 restrictions.

"Should never have used the word 'dictatorship,'" she wrote. "I got caught up in the heat of the moment, that is my fault. i don't know the answer and i won't pretend to. i care about the people who are losing their lives or battling this.. and also the medical staff who care for them. and it is hard knowing these local business owners and watching them struggle and having to lay off their employees, not knowing how they are gonna make it. so i'm sorry. i let my emotions get the best of me. i love michigan and the people here..don't get that twisted in this This place was my rock during my tough times.

"and i wish there was an answer that pleased everyone but we know that is definitely not the case." 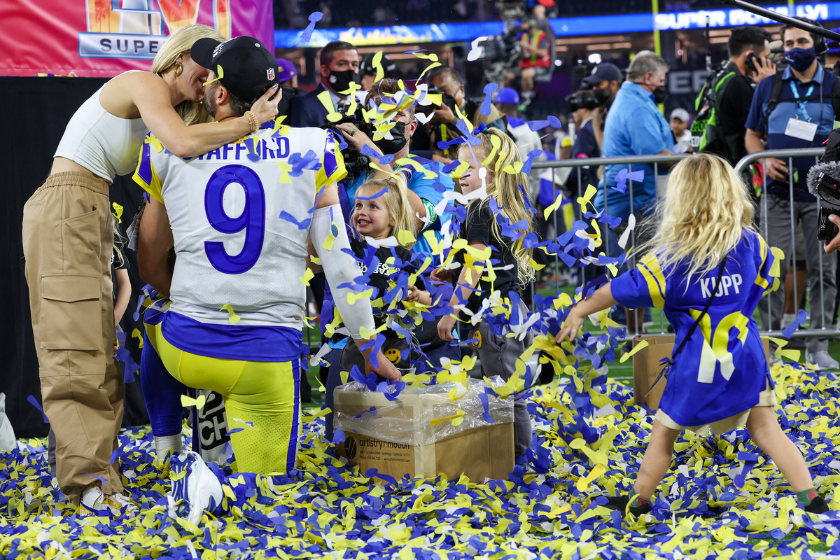 RELATED: Matthew Stafford's Net Worth: How His Rifle Arm Made Him Millions

The brain tumor diagnosis and 12-hour brain surgery (for a tumor called acoustic neuroma) wasn't going to stop the Staffords from having another kid. No way. The twin girls were born in 2017, Hunter was born in 2018, and the couple announced they were expecting another kid in the summer of 2021.

They kept the gender a secret, too.

"Got to enjoy one of the most magical places with my husband and 3 of our kiddos. Not pictured: our middle baby girl, Huntie."

"Baby stafford #4 due this summer (no worries, well before training camp)"

"We won't know whether the stafford kids will continue as a girl squad or if a little brother will enter the craziness until baby is here. Excited and exhausted #staffordpartyof6 #madeindetroit #nomoresedans #staffordstrong"

Then, with everyone waiting for Stafford and his wife Kelly to welcome their fourth child, they shared the news on social media.

The couple's fourth child was another baby girl. Her name is Tyler Hall Stafford.

Matt Stafford might have been best known for competing with Aaron Rodgers in the NFC North and throwing touchdowns for the Lions at Ford Field, but after a strong playoff run that includes wins over the Arizona Cardinals, Tampa Bay Buccaneers and the San Francisco 49ers in the NFC Championship Game, Stafford was ready to lead the Rams to a win over the Cincinnati Bengals in Super Bowl LVI at SoFi Stadium. All those early morning workouts with wide receivers finally paid off.

He's already a proud girl dad and husband. Next on the bucket list? Repeating as Super Bowl champion.

This post was originally published on March 2, 2020 before updating.

MORE: Cooper Kupp's Wife is the Reason He Became an NFL Star