Kirk Herbstreit wears many hats. For college football fanatics, the ESPN College GameDay stalwart is known as a color commentator calling the week's biggest matchup every Saturday night in the fall and the voice of EA Sports' NCAA Football game. To his sons, Herbie is a leader and role model who never fails to deliver all-time dad moments.

But when you visit the Sports Emmy Award-winning analyst's social media profiles, the very first word you read is the most important: Husband.

Allison Butler (or Alison Butler, as some have reported), Kirk Herbstreit's wife, met her husband when the pair attended Ohio State University. Kirk was the starting quarterback his year senior year, as well as being named co-captain of the 1992 Buckeyes that finished 8-3-1 and reached the Citrus Bowl. Herbstreit graduated with a degree in business administration before beginning his broadcasting career, opting for a career on the sidelines and not on the NFL gridiron. 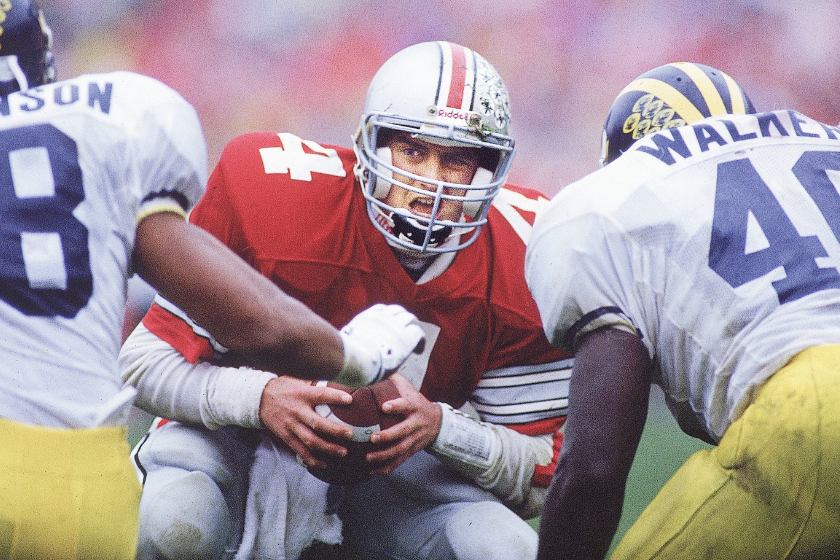 Allison was on the Buckeyes cheerleading squad roaming the sidelines of Columbus' Ohio Stadium. The star football player and cheerleader were married in June 1998.

Guess those coming-of-age movies were right after all.

On the whole, little else is known about Herbie's significant other. That fact is surprising when you consider the spotlight and public scrutiny he's received over nearly three decades on television programs. After the Herbstreit family moved from their home in Ohio to Nashville, Tennessee, back in 2011, it was rumored to be caused by the immense scrutiny Ohio State Buckeye fans were giving their famous alumni.

Herbstreit cited how "the time was right" in an interview with The Oklahoman:

"We didn't get chased out of town by Ohio State fans at all. There were a few isolated incidents where we just thought about things and family and their safety and decided it was probably in the best interest of our family to move."

The family moved back to Ohio in 2021 so Chase, the youngest Herbstreit, could attend St. Xavier High School in Cincinnati. Chase is a quarterback like his dad.

The former Ohio Gatorade Player of the Year at Centerville High School makes it a priority to find time for weekend dinners with Allison. One perk of being a college football analyst is a December trip to New York City for the annual Heisman Trophy presentation, where the couple sees a Broadway show and soaks in Manhattan's holiday season.

Until then, the sportscaster's career is filled with calling games on ABC, cameo appearances on SportsCenter and contributions to Columbus, Ohio's ESPN affiliate 97.1 "The Fan." The busy fall is worth it with Herbie's reported annual salary of $2 million. However, he does find time to volunteer with multiple charities such as the Buckeye Cruise for Cancer.

But after Herbie's fully-loaded fall as a studio analyst ends with the College Football Playoff national championship game, it's back to being a husband and father.

As for their family and personal life, the couple shares four sons, with identical twins Jake Herbstreit and Tye Herbstreit are the oldest. They both committed to play college football at Clemson, although Jake left the program before his senior season and ended his football career in June 2021. Zak Herbstreit played high school football at Montgomery Bell Academy and attends Ohio State as a preferred walk-on. Zak joins his father and grandfather Jim Herbstreit as fellow Buckeyes. Jim played at OSU and was an assistant coach under Woody Hayes.

The youngest son is Chase Herbstreit, who you might remember from his cameos on the set of ESPN's College GameDay alongside Rece Davis, Desmond Howard, and the great Lee Corso.

The family is rounded out by two more good boys, golden retrievers Ben and Theo. 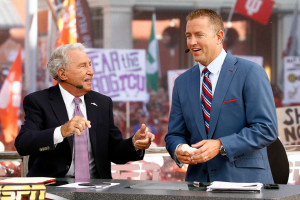 When Jake, Tye and the Clemson Tigers met Ohio State at the 2019 Fiesta Bowl, a national championship berth was on the line. Naturally, Herbie's professionalism as an American analyst couldn't publicly choose sides with him and Chris Fowler calling the college football game. Chase is a die-hard fan of the Ohio State football team and took no issue trash-talking his big brothers. He takes an even lesser issue trash-talking Michigan.

As for Allison Herbstreit? She dawned the orange and white and joined Clemson's family section to cheer on her sons against her alma mater.

Sportscaster, sports analyst, Kirk Edward Herbstreit; whatever you call him, the man of many hats is Allison's husband first and foremost.