Imagine this: you're a lifelong Dolphins fan, feeling optimistic for Miami's future after your second consecutive winning record. Yeah, a 9-8 season finish isn't anything to plan a parade over, but considering you started the season 1-7, it's something to be proud of.

Then the football Gods gift you the unimaginable, a unicorn of a player, the fastest in the league, a known cheetah: Tyreek Hill. You aren't sure if you read the tweet right. Tyreek Hill has chosen to leave Kansas City and his rocket-slinging quarterback, and he's headed where? Miami? You couldn't have read that right. Could you have? Your team suddenly has an offensive weapon unlike any other. 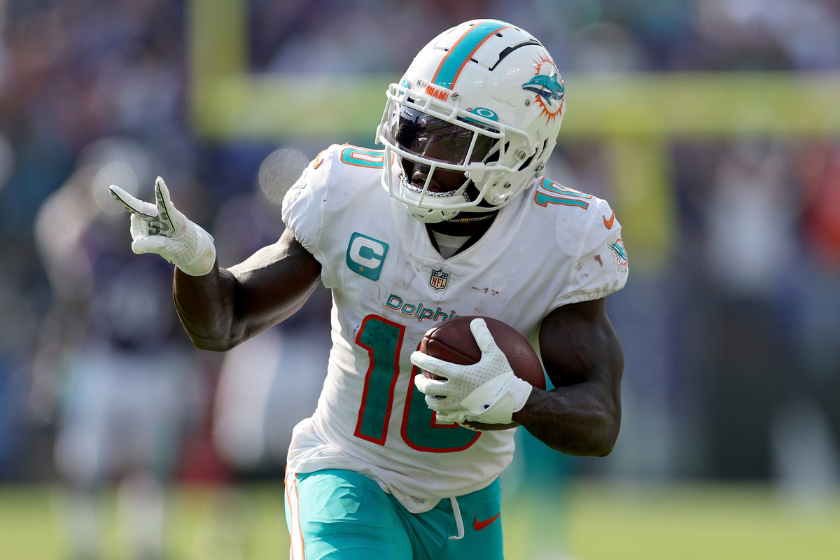 But wait, it gets better, it's Week 4 of the season and you're heading into Thursday Night Football undefeated. Undefeated! Everyone is chattering about your Super Bowl odds. This isn't a dream. This is real life and your team, the one you rooted for season after losing season, is making magic in Miami.

And while Florida is known for a specific brand of magic that originals from a mouse named Mickey and a team that once had Shaq, the Dolphins' magic comes from an even more unlikely source.

WATCH: 1on1 with Dolphins linebacker Jerome Baker on getting over the Bills hump, the Dolphins bandwagon and his ping pong prowess in the locker room#finsup @Lastname_Baker @WPBF25News pic.twitter.com/CYUNT4zIPl

We could move on to talk stats, break down the matchups and dissect both the Bengals' and Dolphins' last few performances, but I'd rather explore the intangible Miami Magic. Where does it come from? The historic great teams of the past all had 'it.' The unexplainable chemistry, fight, hunger, connection that made them special. I know it's only Week 4 and there's a lot of football ahead of us this season, but from where we stand now, Miami has IT.

The Dolphins quarterback chalks it up to the team's resiliency and ability to find ways to win no matter the odds. The Miami leader may be right, but I'd like to throw out another option. This team is having fun. Playing with joy isn't something we see often in the NFL, maybe it's the fact that we can't see their faces week to week, or maybe it's because they are getting beat up and laid out every play -- that's no fun. Regardless, finding the joy is something we talk less about when dissecting NFL teams, whereas we palpably see it in the NBA.

True, this Dolphins team is resilient and statistically accurate, but they are also having a blast playing together. Camaraderie and chemistry can sometimes be the defining characteristic between a championship team and a team playing their last game in early January. So where is their chemistry stemming from? Could Miami's magic be coming from another sport altogether? A sport like, oh I don't know, Ping Pong?

In Tua's Sept. 27 presser, he spoke at length about the addition of a Ping Pong table to the locker room. The fun table game has now become a competitive, unifying bonding experience for the team. Could it be the secret ingredient to the Dolphin's magic?

Tua shared with glee, "I would say the first thing that the ping pong table has brought is competition, more competition, into the locker room. I'd say another thing that it's brought, is guys you know trying new things...Now guys think they are professionals. Guys are going and getting their own paddles. I mean that's, that's crazy. Guys are like watching YouTube, they're doing like, like some weird serves now. They're doing some professional serves."

The ping pong excitement has become so intertwined with the team's competitive vibe, Tyreek Hill went out and bought the entire team personalized paddles. A sign of not only being a leader within the locker room, but a player who knows the importance of a team bonding together over more than just football. *On a side note, I'd like to start a petition to get a reality show about the ping pong action happening in the locker room.

One thing is for sure. Miami's magic is a joy to watch and something we could very well be celebrating come February. This Thursday we will see if the joy from ping pong and trash talking can parlay to touchdowns, field goals, interceptions, sacks and end zone dances. If Joe Burrow and the Cincinnati defense have anything to say about it, the only celebrations Miami will be having will be around that infamous ping pong table.

MORE: Prime Video Can Charge Whatever for Thursday Night Football, Because NFL Fans are Willing to Pay