For the Dallas Cowboys, the most memorable part of the 1990s were undoubtedly the three Super Bowl wins. However, that time also featured star players taking trips to the White House. No, not that White House.

While playing for the Cowboys, superstar receiver Michael Irvin and other Dallas players rented a house close to the team facility and used it as their party pad. Basically, it was a brothel.

As the top team in the pro football, the Dallas Cowboys apparently needed a place to blow off some steam and do some celebrating that was also close to their Valley Ranch practice facility.

Some of the stories are simply wild.

Everything is bigger in Texas, so it should come as no surprise that the party pad was absolutely insane with illegal activities, including drugs. The future Hall of Fame wide receiver would eventually land in hot water with both Cowboys owner Jerry Jones as well as law enforcement.

With multiple moments throughout his career in high school, playing college football at the University of Miami, and in the NFL, there was concern about Irvin for his decision making and off-the-field issues. However, with winning Super Bowls, some of those issues were much easier to ignore.

The other faces of the Super Bowl-winning Dallas teams, most notably quarterback Troy Aikman and running back Emmitt Smith, made up a great trio of football players with "The Playmaker." And even though these two weren't a noted part of the "White House" situation that would eventually lead to a five-game suspension and tons of community service for Irvin, they played a huge role in how we all remember him.

If Irvin had been a member of a struggling team, we would not remember him as fondly as many do. He is remembered as the best receiver on a great team instead of another diva receiver that caused more problems off the field than plays he made on it.

But "The Playmaker" did have a bunch of former Cowboys players who regularly visited with the lease actually being in fellow receiver Alvin Harper's name.

An article from 2009 by Jeff Pearlman of The Guardian had some great bits about the house and what the neighborhood was like.

"...the new neighbours in an exclusively white, low-key community were 6ft 5in, 300-pound African-American men escorting an endless conveyor belt of large-breasted blondes. Nate Newton insists the White House was a haven for neither prostitution ("What did we need a prostitute for? Women laid down for us") nor drugs ("Never saw 'em"), yet his take is disputed by myriad team-mates and people in the know."

With just three head coaches -- Tom Landry, Jimmy Johnson, and Barry Switzer -- in the first 38 years of the franchise's existence, there was a lot of consistency in the head of the team. However, Landry ran the team differently than how Johnson would once he was brought in after Landry was fired.

Irvin didn't really learn his lesson after an arrest for possession of cocaine and marijuana that eventually led to the discovery of the White House, because he continued to experience trouble for the next few years until he became dedicated to his religion. 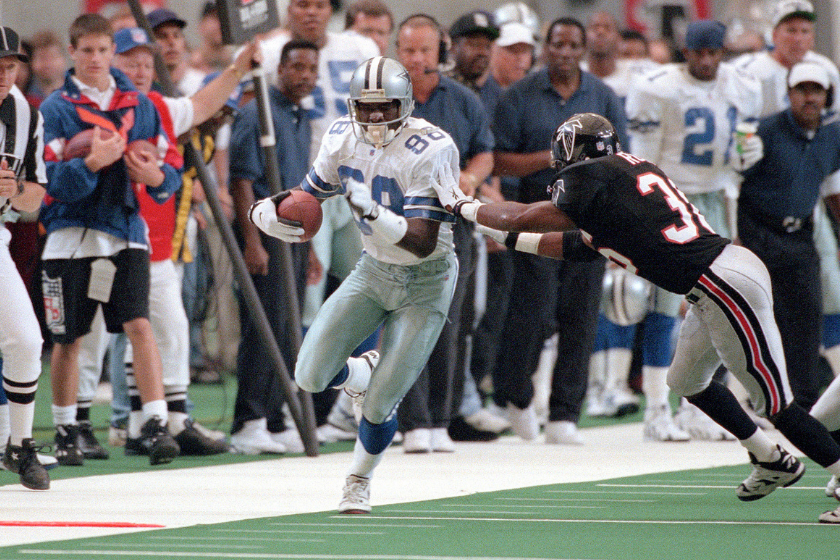 Although Irvin may have been one of the first diva receivers in the NFL before guys like Terrell Owens, Chad Johnson, or Antonio Brown, his career would end because of injury and not because a team wasn't willing to put up with his personality or off-field issues.

In 1999, during what would be his last year in the NFL, Irvin took a hit on a slant route in a Week 5 game against the Philadelphia Eagles that led to temporary paralysis and the end of his legendary career.

Michael Irvin is one of the best statistical receivers in NFL history with 11,904 yards in the regular season, but his 1,315 receiving yards in the playoffs is only behind Jerry Rice, Julian Edelman and Rob Gronkowski. He played in 16 postseason games, including three Super Bowls and four NFC Championship Games. His best playoff performance came against All-Pro cornerback Deion Sanders and the San Francisco 49ers when he had 12 catches for 192 yards and two touchdowns.

The five-time Pro Bowl selection caught a total of 16 passes for 256 yards and two touchdowns in the three Super Bowls against the Buffalo Bills and Pittsburgh Steelers.

Fortunately for him, his play on the field is remembered a lot more fondly than his involvement with the "White House."

MORE: Michael Irvin's Wife Has Been By His Side Over 30 Years