Antonio Brown may be No. 1 among players who have spoiled their legacy.

Sadly, maybe it was inevitable.

"I love AB, but what has made him great is also his biggest demon," said former Pittsburgh offensive coordinator Todd Haley, who guided Brown in the biggest statistical seasons of his career. "It's him against the world. Very emotional, but ... if he doesn't trust you, it can get more emotional."

It once got so bad between Haley and Brown on a sideline that Brown gave Haley his helmet and told Haley to go run the plays when Haley tried to correct him. In the high-pressure, hyper-competitive world of the NFL, that's not necessarily unique.

How Brown reacted on Sunday was unique.

Video of Antonio Brown leaving the field after taking off his jersey and shirt and throw it into the stands. pic.twitter.com/1hwNYei5Fq

In 30 years of covering the National Football League and some 50 years of paying attention to the game, I've seen a lot of wild moments and strange stories. I covered Ricky Williams walking away from football, heading to Australia in the process, and then returning to the game.

I was in San Diego when Barrett Robbins literally and figuratively went South of the Border the night before a Super Bowl. I was already a reporter when Stanley Wilson lost his mind in a drug-induced haze, and I was in Miami when Eugene Robinson propositioned an undercover cop dressed as a prostitute. Each of those moments preceded Super Bowl losses.

But there's something about Brown's exit from the Tampa Bay Buccaneers -- and, presumably, the entire NFL -- that makes this one top the charts. In all of the insane moments that have defined this wide receiver's career, this is the show stopper. This is the one that makes you sit there and say in disgust, "You have to be kidding me."

Of all the selfish things that Terrell Owens did in his career, he never did anything close to what Brown accomplished Sunday.

It's not just the squandered chances Brown has received that makes me aghast. It is the complete and total disrespect for both his team and, selfishly, his own legacy.

Despite all the weird transgressions of Brown's career since he talked his way out of Pittsburgh after the 2018 season, he still had a chance to salvage everything. The Bucs are in position to win another Super Bowl this season. Brown could have won a second Super Bowl and likely would have been a critical part of that journey with teammate Chris Godwin out the rest of the way.

How This Affects Brown's Hall of Fame Chances 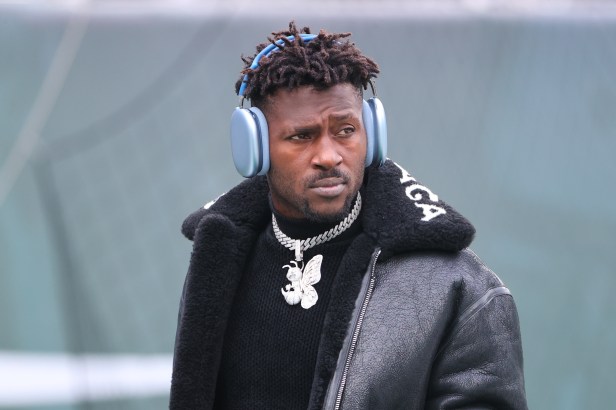 Even without a Super Bowl win, Brown has the numbers to justify getting into Hall of Fame and overlook his issues. Yet, with all of that to consider, Brown decided to hit the eject button on his career.

Even if this was just about the moment, Brown should have been focused on the team and the game. The Bucs were down two touchdowns and coach Bruce Arians was trying to put Brown back in the game during the third quarter in Sunday's game against the Jets.

If you just care about playing, you stay in the game.

Yet, somehow, someway, Brown felt so set off after a conversation during the game with coach Bruce Arians that Brown's answer was to strip down to his uniform pants while on the field and then leave his team shorthanded. Even in the aftermath of his weirdness, Brown never reconsidered his actions. He was so out of his mind that he left the field, got dressed and then tried to get an Uber to take him from the stadium before the game was over.

That led Tampa Bay to leave him behind. Coach Bruce Arians announced after the game that Brown would no longer be a member of the Bucs.

Here's the video of Bruce Arians making the Antonio Brown news official: ?He is no longer a Buc. That's the end of the story. Let's talk about the guys who went out there and won the game."pic.twitter.com/fVBlytElt0

Will Brown ever be a member of the NFL again?

There is always a tendency to believe that some team desperate to win will take a chance, especially at this time of the season. At the same time, if you watched Brown's antics on Sunday, it's hard to believe that he is anything close to a guy who can help a team win.

To put it another way, if you can't see the opportunity to continue working with Tom Brady and the Buccaneers in pursuit of a title that could also help you get to the Hall of Fame or even just continue your career, then something is seriously wrong.

Sadly, that's likely the case. One day, we may find out that Brown is suffering from serious mental issues that are exacerbated by CTE. That's sad and awful to consider. At the same time, it's a sad and awful situation that doesn't deserve to be part of a team trying to win.

As Brady pointed out after the game, Brown deserves compassion and understanding. What he doesn't deserve is another chance. This isn't just a guy who has hurt people off the field (Brown has done plenty of that, including everything from an accusation of sexual assault to a fake vaccination card), this is now a guy who has hurt his team at a crucial moment.

This is a guy who has walked away from two likely Hall of Fame quarterbacks (Brady and Ben Roethlisberger) and been dismissed from some of the best organizations in the league (the Pittsburgh Steelers and New England Patriots).