The average NFL team is worth more than $4 billion, so it makes sense that even the smaller, unheralded jobs like waterboys make surprisingly good money. For whatever reason, though, the same can't be said for the average salary of NFL cheerleaders.

Cheerleading is not as glamorous as you might think. The NFL's professional cheerleaders must abide by a strict set of rules and a rigid schedule. Their duties include day-long practices and showing face at team appearances for which they are compensated very poorly. It's far from what you saw on the sidelines in high school.

Considering owners like Jerry Jones can afford a $250 million yacht, you'd think he'd be able to pay the Dallas Cowboys cheerleaders at least minimum wage. The most famous cheerleading squad in America deserves way more than that, but that's an argument for a different day.

While National Football League teams are printing money and the football players are cashing in on massive paydays, members of the cheer squads are getting paid sometimes less than minimum wage for their hard work and dedication.

The Strict Lifestyle of NFL Cheerleaders 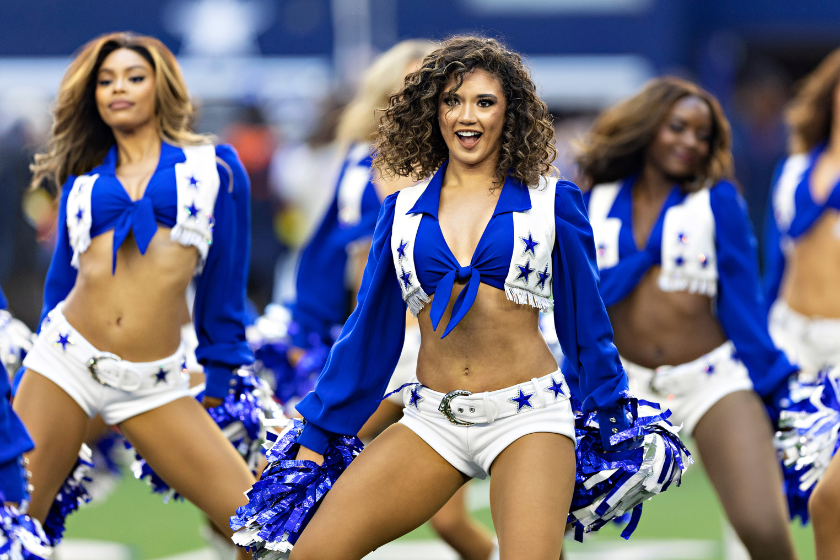 The life of a cheerleader is not as glamorous as it seems.

For many of these cheerleaders, dancing in mini-skirts isn't their first job. The requirements turn what looks like a fun side gig or part-time job into another full-time job.

Practices can be a commitment of as much as eight hours per week. Public appearances and photo shoots eat into their schedules. Home games are an all-day affair. Plus, some cheerleading squads must work when the team plays on holidays like Thanksgiving or Christmas.

"I really felt like I had two full-time jobs during the season," former Philadelphia Eagles cheerleader Tiffany Monroe told Money. "And our season never really ended. We got a little bit of a break in February."

One anonymous former cheerleader spoke with Cosmopolitan about the harsh realities of the sideline career. Gaining weight is a no-no. Perfectly manicured nails and straight hair are musts. Even the wrong shade of skin could be grounds for firing. Cheerleaders are also barred from fraternizing with the NFL players.

"I quickly found out that the hardest part of professional cheerleading isn't learning the eight counts, high kicks, or whatever cheesy dance move we were being taught," she said. "It was always looking perfect. Our contracts actually said, 'Your appearance must be impeccable at all times.'"

How Much Do NFL Cheerleaders Make? 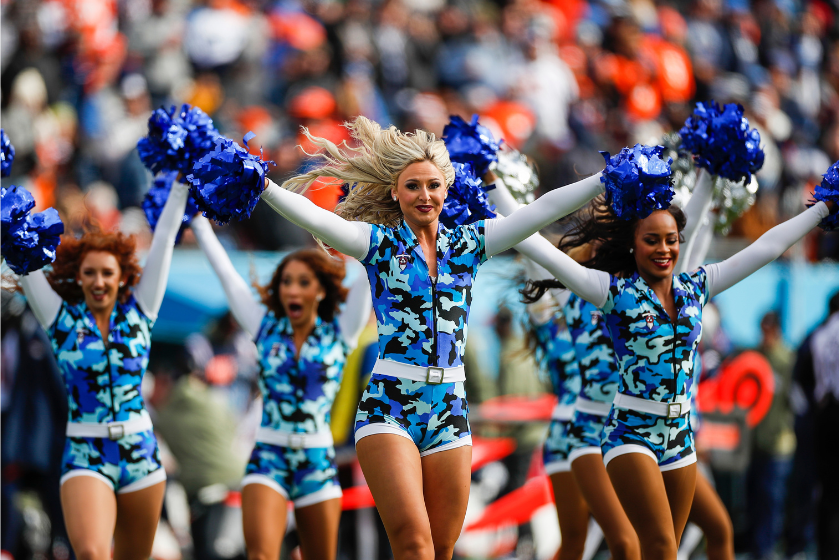 Despite sharing the same football field with millionaire athletes, cheerleaders only make a small fraction of what the players do.

The same former cheerleader revealed to Cosmopolitan that she made just $3,000 during the 2006 season, but she only took home a few hundred bucks after deducting things like manicures, makeup and personal trainers. Another former San Francisco 49ers cheerleader filed a lawsuit claiming to have made $1,250 in a season, or about $2.75 per hour.

According to ESPN, the common rate of pay for NFL cheerleaders is $150 each game day and $50-75 per public appearance. Each team hosts 10 games. However, with the league shifting to 17 games in 2021, each conference takes turns hosting nine regular season games (and one preseason game) while the conference with eight regular season games has two preseason contests. The NFC has the honor in 2022.

On top of the terrible pay, some NFL teams make cheerleaders pay to audition in the first place. The Atlanta Falcons, for example, charge $35 while the New Orleans Saints (the Saintsations) and Indianapolis Colts require $75.

Dallas Cowboys Cheerleaders Salary: The NFL's Cream of the Crop 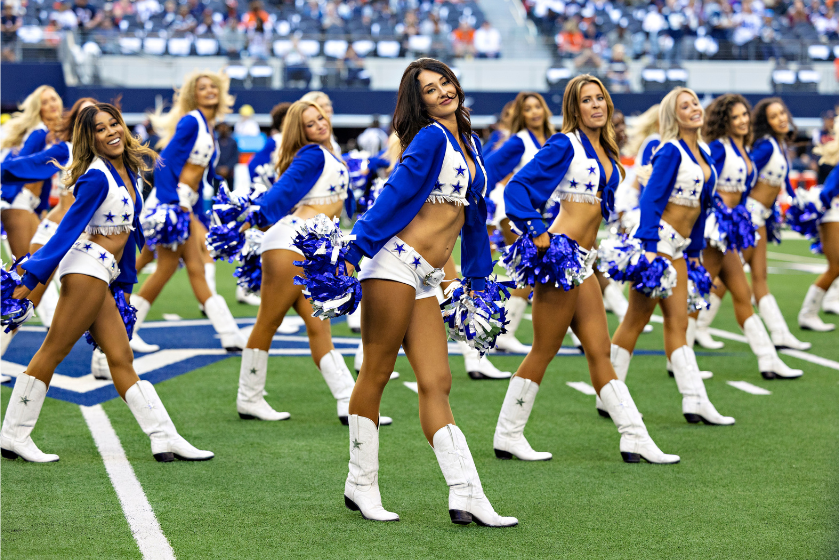 It isn't clear exactly how much it pays to be a cheerleader for the Dallas Cowboys, but we do have some anecdotal evidence.

Former Cowboys cheerleader Erica Wilkins sued the team in 2019 after claiming she made $8 per hour, far less than NFL mascots. The team settled the dispute and the entire squad earned a much-deserved raise.

She said that her first year on the team she made about $5,000 in yearly earnings and that number only grew to $16,000 by her third year cheering for America's Team. In addition to the about $8 an hour she received, she was paid $200 for each game day. Even after gaining a few years of experience doing cheer stunts on the field, she still wasn't making all that much.

But strict schedules meant these DCC cheerleaders couldn't get second jobs. All for sometimes less than minimum wage, Wilkins told WFAA. The minimum wage in Texas is $7.25.

"I remember I did an out of town appearance. It was my first year on the team meaning I'm making $100 flat rate for that appearance," Wilkins explained. "I think it ended up being like a 16-hour day and I was paid a flat rate of $100 plus taxes being taken out of that. I think it was $88."

NFL Cheerleading Squads are Making an Effort to Improve Pay 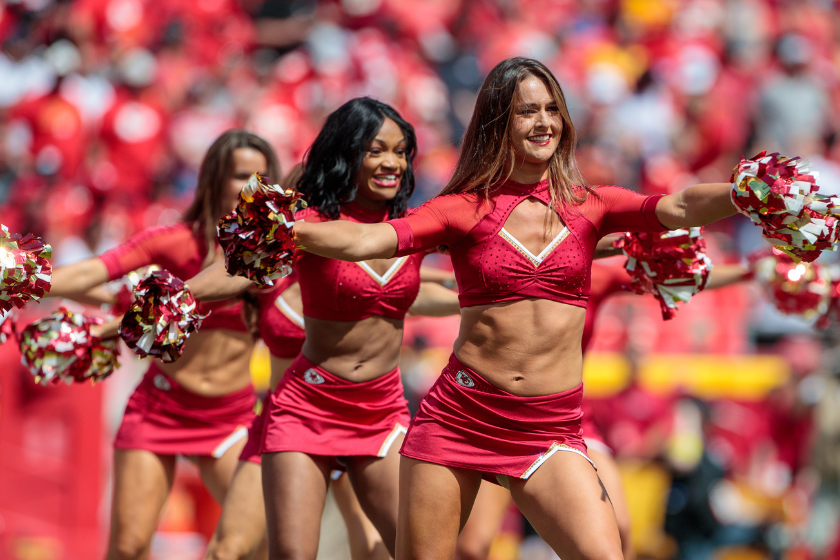 In general, these experienced cheerleaders don't make a whole lot to work pro football games. The good news is these pom-pom professionals have taken a stance in recent years.

In addition to Wilkins' case, both the Tampa Bay Buccaneers' squad and the Oakland Raiders' Raiderettes filed class-action lawsuits in 2014 after taking home just $1,000 for one NFL season.

The result? Teams were forced to cough up money and must now pay for every hour worked.

Other cheerleading squads like the Buffalo Bills' Buffalo Jills, Cincinnati Bengals' Cincinnati Ben-Gals and New York Jets cheerleaders have also won lawsuits. According to Money, the then-San Diego Chargers had previously been paying their cheerleaders $75 per game, but a California law in 2016 made teams pay at least the state's minimum wage of $10 per hour.

Whether it be for the New England Patriots, Los Angeles Chargers, Los Angeles Rams, New York Giants or the rest of the NFL's professional sports teams, let's hope these ladies get paid what they're worth. It's time teams start actually supporting cheerleaders.

This post was originally published on March 31, 2020 but has been updated.

MORE: How Much Does a Waterboy Actually Make in the NFL?