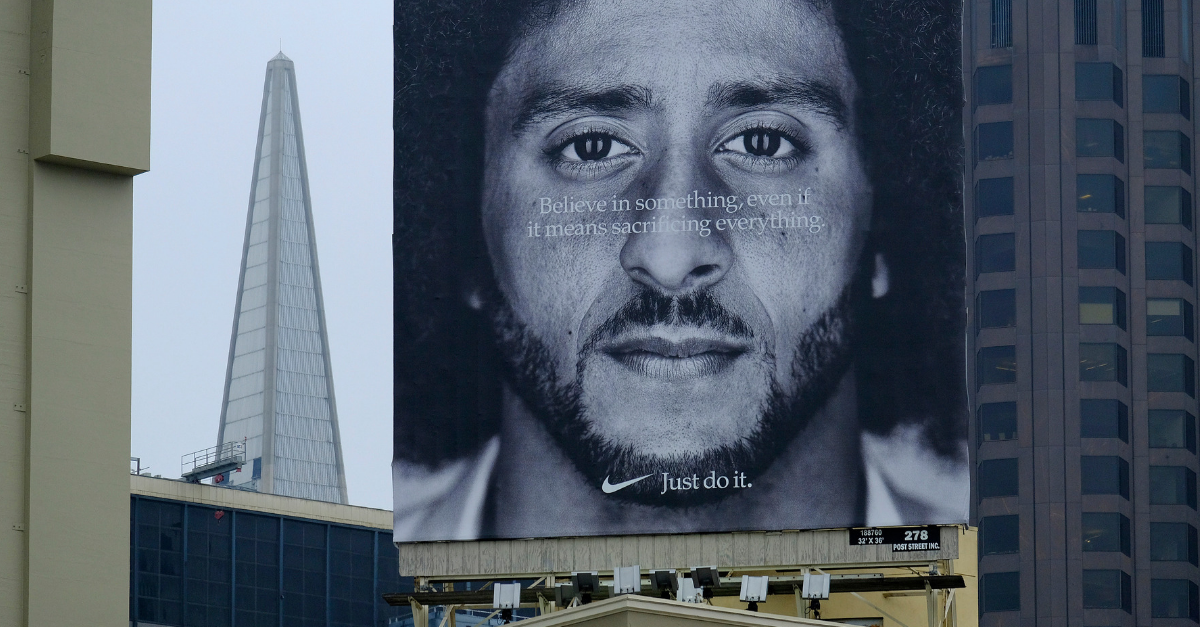 The NFL has released a statement after the former San Francisco 49ers quarterback initially posted the original advertisement from the athletic giant?s 30th anniversary ?Just Do It? campaign, but why now?

The first three statements are factual. The last doesn?t make a lot of sense.

Believe in something. Even if it means sacrificing everything. #JustDoIt

?Believe in something. Even if it means sacrificing everything #JustDoIt? has become much more than two sentences, nine words, and an infamous slogan as a hashtag. It has sparked every human emotion possible and even had President Donald Trump adding to the ?discussion? on social media.

Yet, for some reason, the NFL releasing a statement of its own is the most confusing part to this hot-button topic since the ad dropped, and Kaepernick?s new deal with Nike was announced on September 3.

?The National Football League believes in dialogue, understanding and unity. We embrace the role and responsibility of everyone involved with this game to promote meaningful, positive change in our communities. The social justice issues that Colin and other professional athletes raised deserve our attention and action.? ? Jocelyn Moore, the NFL Executive Vice President of Communications and Public Affairs

Hold up. Wait just a second.

That same league released a statement regarding Kaepernick? The undisputed leader of players kneeling to protest social injustice in America? The quarterback who hasn?t take a single snap since 2016? The man not employed by the league and currently in the lead of a collusion case against the NFL, which will now go to trial?

These things have been happening, and essentially set in motion, for years, but it took a single tweet and a new Nike deal, which will feature a Kaepernick signature shoe and apparel, to get the most powerful professional league to finally address it?

Of course, the NFL?s statement is just a bunch of words. There is no course of action taken, nor does the league run by commissioner Roger Goodell suggest any change. It just says all of this deserves their attention and maybe, just maybe, action will take place.

But why this? Why now? Why put something out after, for a lack of better words, neglecting to do so in the past?

If the NFL truly embraced it, why would they consider changing their policy? Why would you take so much backlash from owners and NFL players and for years and lose fans by the dozens each day?

Is it because this is an attempt to recover from declined popularity? It is to potentially soften the blow if the collusion case trial goes in Kaepernick?s favor? Is it because Nike now has the ad campaign on top of the Nike store in San Fransisco to be seen by millions?

BIG STATEMENT: A look at the new @Kaepernick7 ad on top of @Nike's store in San Francisco. "Believe in something. Even if it means sacrificing everything." pic.twitter.com/CCbot8ywy4

Kaepernick, a University of Nevada alum, spent six seasons in the NFL with the 49ers after being selected in the second round of the 2011 NFL Draft. He threw for 12,271 yards with 72 touchdowns and 30 interceptions while rushing for 2,300 yards and 13 more scores in 69 career regular season games. He also added 1,374 yards with seven touchdowns and five interceptions in six playoff games, including a start in Super Bowl XLVII.

The 6-foot-4, 230-pound veteran probably isn?t a franchise quarterback, but he?s had a solid career and probably deserves the chance to be on a team?s 53-man roster as a backup.

At least that?s what he is arguing in the case going to trial, too, that owners have colluded to keep him off any NFL roster since he became a free agent in 2017.

For over two years, Kaepernick has been the face of this movement and the new Nike ad, which also features the likes of Serena Williams, LeBron James, Odell Beckham Jr. and Shaquem Griffin, has seemingly stirred the pot now more than ever.

There are other organizations, such as the National Association of Police Organizations (NAPO), which have made there stance on the matter, and people have burned Nike shoes and apparel. There is likely to be more debate and actions to follow, too.

Oh, Nike! You are soooo brave!! Holding up Colin Kaepernick as an example of someone who has "sacrificed everything". Right! Come on over to Arlington National Cemetery, or to the National Law Enforcement Officers' Memorial in Washington, D.C…. https://t.co/od3RlpjcYg

However, no matter your political affiliation or whether you agree with the anthem protests or the Kaepernick ad itself, everyone should definitely be asking this question regarding the NFL?s statement on the matter involving former quarterback Colin Kaepernick: