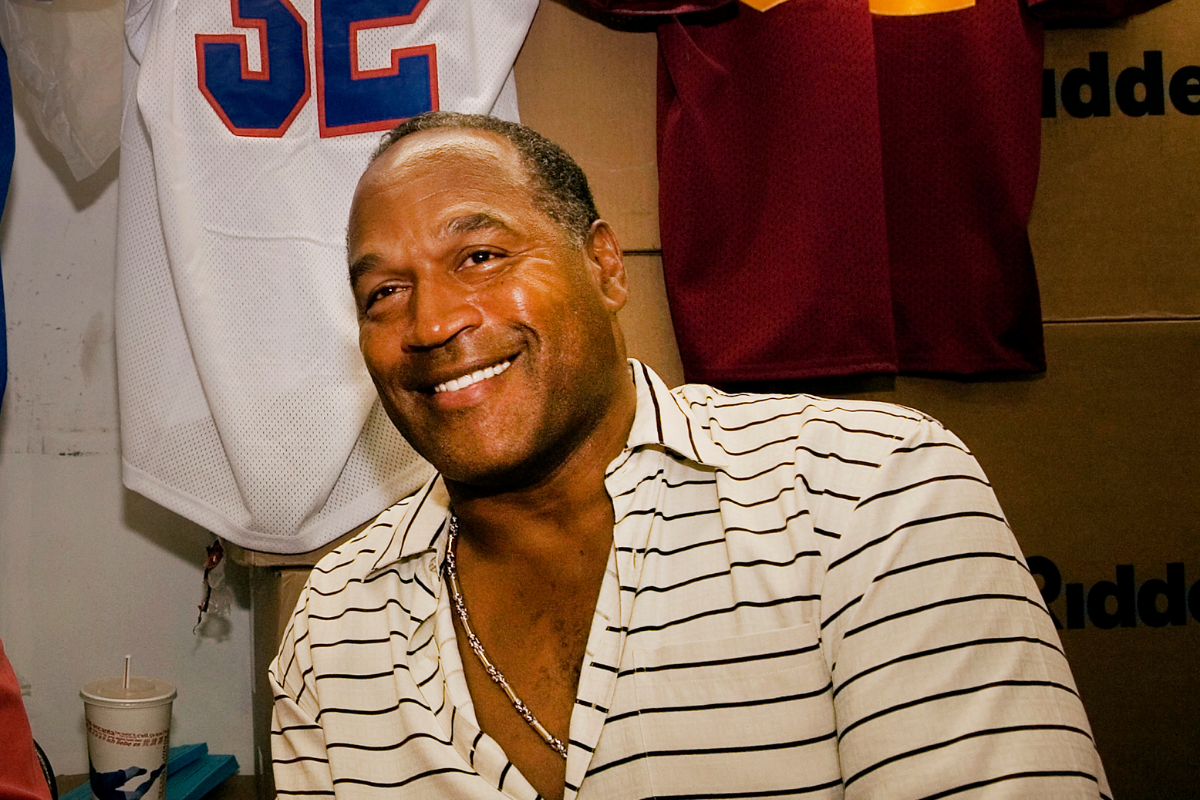 O.J. Simpson is one of the most polarizing professional athletes the world has ever seen. The former Heisman Trophy winner and NFL Hall of Famer was one of the most successful running backs and media personalities of all time, especially considering his viable acting career.

He was maybe more famous for taking the country by storm for fleeing police in his white Ford Bronco on the highways of Los Angeles or for the widely publicized “Trial of the Century” for the murders of ex-wife Nicole Brown Simpson and Ronald Goldman outside of Nicole’s Brentwood condo, both of which he was found not guilty of.

“The Juice” was imprisoned in 2007 for nine years following an armed robbery in Las Vegas, Nevada, but was released in 2017 and has since made headlines for some very odd social media use. He told his nearly one million followers he’s “got a little gettin’ even to do” and talks about, of all things, fantasy football while sitting in his golf cart.

Simpson still owes more than $70 million to the families of Brown Simpson and Goldman, which begs a few questions now that he’s out of jail: How does he make his money? How much money does he still have?

And, lastly, what is O.J. Simpson’s net worth?

6⃣8⃣ days until USC football featuring @TheRealOJ32 and his 1968 Heisman Trophy, the second of seven in school history. pic.twitter.com/iuvb7RVdVX

RELATED: Lawrence Taylor’s Net Worth: How the Hall of Famer Lost $50 Million

Orenthal James Simpson was born in San Francisco, where he spent his early life playing football for Galileo High School. Simpson became a junior college All-American playing for the City College of San Francisco in 1965 before transferring to the University of Southern California.

Simpson emerged as a bona fide superstar for the USC Trojans. He led the nation in rushing with 1,543 yards and finished second in the Heisman Trophy voting in 1967. A year later, he took home the award in a landslide after amassing 1,880 yards and 23 touchdowns his senior season.

The Buffalo Bills selected the Juice first overall in the 1969 AFL-NFL Common Draft. Simpson, who threatened to forego an NFL career for the acting business, demanded the largest contract in professional sports history at the time, and he got it: $650,000 over five years.

Simpson rushed for more than 11,000 yards over his 11-year NFL career, including a dominant stretch from 1972-76 in which he rushed for 7,699 yards. The NFL star spent his final two years in the NFL with the San Francisco 49ers.

Simpson’s name is still high on many of the NFL’s rushing record leaderboards and still holds one: the most games with 200 or more rushing yards (6). The 1973 MVP made six Pro Bowls and five first-team All-Pro teams.

His iconic No. 32 may have been shelved for almost four decades, but the Juice is still remembered as a dominant ball carrier in his prime.

The Lions defeat the Buffalo Bills 27-14, but the game is memorable due to OJ Simpson setting the single game rushing record of 273 yards. The record would be broken the following season by Walter Payton pic.twitter.com/1YGyEOvKPh

Simpson’s face and name was everywhere you looked during his heyday. The public loved the American football player and couldn’t get enough of him, which is why so many businesses wanted to work with the Juice.

The football player had business relationships with Chevrolet and ABC early in his NFL career. He appeared in commercials for the Hertz rental car company in 1975 and on. A spokesman for Pioneer Chicken (Simpson owned two franchises) one of which was toppled in the 1992 Los Angeles riots. He maintained similar spokesperson deals with HoneyBaked Ham, the pX Corporation and Calistoga Water Company. He even appeared in comic book ads.

In 1971, just three years into his pro career, some estimated he was already rich enough to retire.

Before he even retired from football, Simpson tried his hand at Hollywood and sustained success there. Simpson started his own film production company, Orenthal Productions, in 1979.

In one series that was never aired on NBC, “Frogmen,” Simpson played the leader of a group of former United States Navy Seals. Good thing it wasn’t aired, because there’s a scene from it of him holding a knife to a woman’s throat.

Later in 2006, he began his own hidden camera TV show, “Juiced,” which featured him pulling pranks on strangers and rapping around topless women.

Twenty four years ago today, OJ Simpson was found not guilty in the murder of Nicole Simpson & Ron Goldman.

Where were you when they announced it? pic.twitter.com/0kP0N4jI9i

After Simpson won the murder trial, the Nicole Brown Simpson family and Ronald Goldman family filed a civil suit against the former football star and won in a 1995 trial. The families were awarded $33.5 million in the civil trial, and The Cheat Sheet reported in 2019 that Simpson still owed $70 million including interest.

It appears Simpson has no intention of paying that, however.

The Juice moved to Florida in 2000 to avoid paying that money owed from the civil lawsuit. He bought a place in Miami, where pensions and residences can’t be collected. Just a few years prior, he defaulted on the mortgage of his Los Angeles home and it went into foreclosure. He paid $650,000 for the mansion in 1977.

Despite his arrest and sentence for an armed robbery of sports memorabilia from a Las Vegas hotel room in 2007, Simpson doesn’t seem to have money trouble after being released from Lovelock Correctional Center as a free man.

As Sports Illustrated reported, Simpson has a personal pension from the NFL worth as much as $25,000 per month and another pension from the Screen Actors Guild. He’s also reportedly collecting social security since being released from prison.

None of his NFL pension money can be taken away and awarded to the families he owes money to.

Simpson was one of the best running backs in NFL history, and he put together a legendary football career en route to being enshrined in the Pro Football Hall of Fame.

He and Nicole Brown Simpson had two children together, Sydney Brooke Simpson and Justin Simpson. He also fathered three children from a previous marriage to Marguerite Whitley, Arnelle, Jason and Aaren, the latter of which passed away before she turned 2. He’s in good standing with at least some of his kids, because Arnelle came to his support during a parole hearing in 2017.

Back in 1992, Simpson was reportedly worth $10.8 million. But following all the legal trouble and court proceedings, that number seems to be much lower now.

Simpson is worth an estimated $3 million, according to Celebrity Net Worth, Wealthy Gorilla and GoBankingRates.com. That doesn’t nearly make him the high-roller NFL player he once was, but it’s easily enough to retire on as he settles in the Sunshine State.

This article was originally published November 1, 2019, but has been updated since then.

MORE: What Happened to O.J. Simpson’s Kids & Where They Are Now?