Patriots Fans Fight Each Other After Rare Home Loss to Chiefs 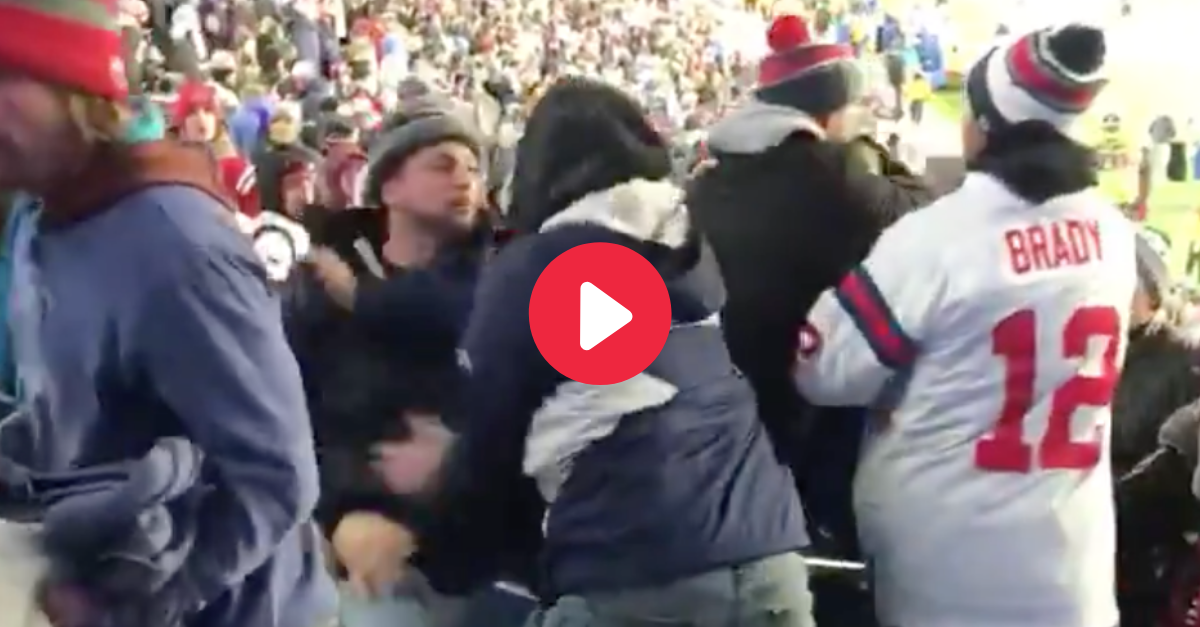 For the first time in years, the New England Patriots lost a home game. That?s right, it finally happened. The Kansas City Chiefs weren?t messing around Sunday afternoon, and, needless to say, it didn?t set well with a lot of fans in Foxborough, Massachusetts.

Kansas City radio host Soren Petro crunched the numbers. Since the start of the 2018 season, quarterback Tom Brady and the Patriots led opponents for a whopping 690 minutes. They were tied for 50 minutes and trailed for only seven minutes. Then, the Chiefs waltzed into Gillette Stadium and led for over 43 minutes to snap the Pats? 21-game home winning streak.

So in order to cope with the 23-16 loss on CBS, after a last-second throw to wide receiver Julian Edelman was batted down in the end zone by Bashaud Breeland, some Patriots fans thought it would be a good idea to exchange blows? with each other.

An NFL fight is nothing new. They happen all of the time. But beating up each other because the third longest home win streak in NFL history was snapped is next level ridiculous.

Patriots Fans Fight Each Other After Chiefs Loss

Give the Chiefs a lot of credit. Jumping out to a 20-7 lead before halftime was clutch. Quarterback Patrick Mahomes ? the reigning NFL MVP ? and superstar tight end Travis Kelce each accounted for a touchdown in the second quarter to blow the game open against a really good New England defense.

Meanwhile, Tom Brady struggled a little bit. He threw for only 169 yards with one touchdown and an interception in the first half. Bill Belichick?s defense did their part in the second half, limiting the Chiefs to just three points total and zero in the fourth quarter, but the offense just didn?t have its usual pop in the AFC matchup.

Fans can blame the officiating for the Patriots loss all they want. There were some missed calls. The quick whistle after Stephon Gilmore recovered a fumble at the end of the third quarter was tough. So was N?Keal Harry being ruled out of bounds on his dive to the pylon, which ultimately led to a Nick Folk field goal.

At some point, however, the reigning Super Bowl champs needed to score some more points, and it just never happened.

The Patriots have now lost two-straight games, and the mood in the locker room can?t be fun right now. Despite still being in the playoff picture, holding the lead in the AFC East, and facing the lowly Cincinnati Bengals next week, fans in New England aren?t taking things well.

No Pats fan is used to losing, so they decided to fight each other. What a time to be alive.

MORE: Tom Brady?s Net Worth is More Impressive Than His Hall of Fame Resume