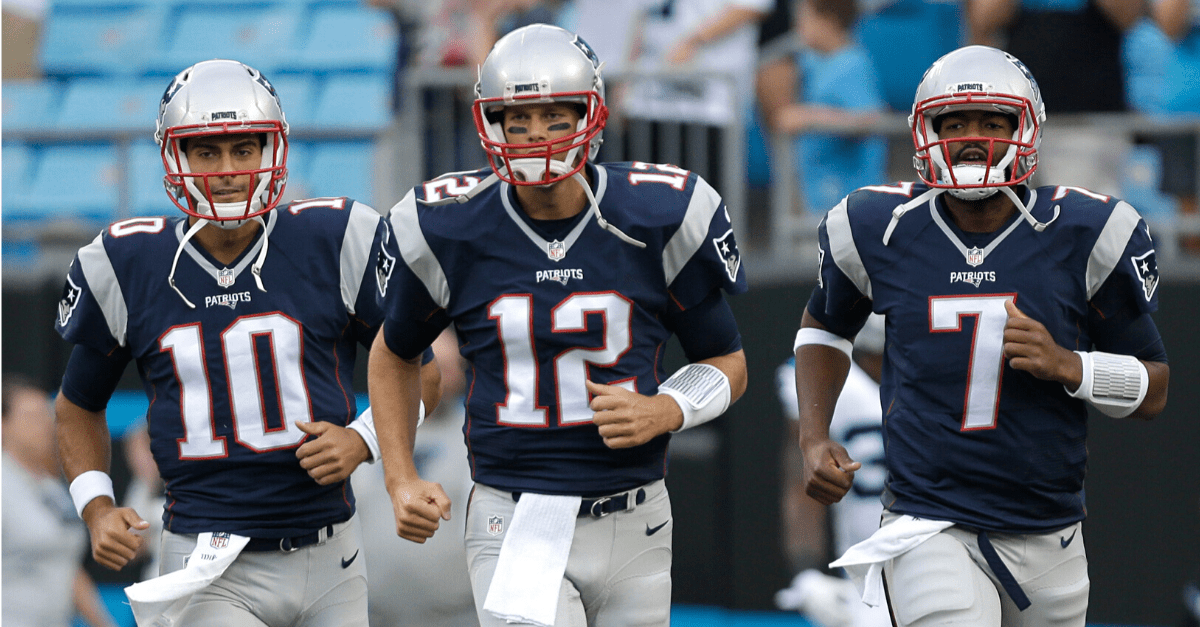 Before scrolling any further, I want you have an honest conversation and ask yourself this: What do you know about the New England Patriots prior to 2001?

After the AFL’s Boston Patriots merged with the NFL in 1970 ? officially becoming the New England Patriots in 1971 ? New England’s favorite team was as average as they come. The Pats won only six playoff games between 1971 and 2000, lost more regular season games (243) than they won (215), and did not win a Super Bowl in two appearances.

Spoiler alert: Tom Brady is the greatest quarterback to ever live. He’s the top spot on this list, as well as the top spot on almost every list you’ll find for the next few decades. His resume sounds like something you could only produce in the latest version of Madden, and somehow, he and Bill Belichick are still going strong.

Aside from the G.O.A.T., what other quarterbacks in Patriots history even existed outside Brady’s remarkable two decades? Here is our list of the greatest signal callers in New England’s history.

Every single anti-Patriots fan points to the 2008 season as the argument for “Tom Brady is a system quarterback.” After Brady went down in that first game with a torn ACL and MCL, a fourth-year pro named Matt Cassel stepped under center and led New England to an 11-5 record.

Cassel threw for 3,693 yards and 21 touchdowns despite being sacked a league-high 47 times. In a 34-31 loss to the New York Jets, Cassel became the first player in NFL history with 400 passing yards and 60 rushing yards in one game ? Only Michael Vick and Deshaun Watson have ever done that. The Patriots missed the playoffs due to tiebreakers, but Cassel’s legacy was cemented forever thanks to guys like Wes Welker and Randy Moss.

Cassel’s lone season as the Patriots starter wasn’t much, but what he did in 15 starts was about as impressive as it gets for someone who’d never started an NFL game before.

Die-hard NFL fans remember the iconic quarterbacks taken in the 1983 NFL Draft. Hall-of-Fame inductees John Elway, Jim Kelly and Dan Marino were among six QBs taken in that first round, the fourth of whom was taken 15th overall by the New England Patriots.

Tony Eason was the first QB in major college football history to average least 300 passing yards per game for his career, and “Champaign Tony” parlayed that into his shot. By his third NFL season, Eason guided New England to their first-ever Super Bowl appearance, but ran into the 1985 Chicago Bears and their vaunted 46 defense. Eason went 0-for-6, was replaced by Steve Grogan, and his performance is considered the worst in Super Bowl history.

Eason never sustained success after that, was traded to the New York Jets in 1989, and was out of football after the 1990 season.

We are deeply saddened to learn of the passing of Patriots Hall of Famer Vito "Babe" Parilli: https://t.co/wOZijvspNn pic.twitter.com/5thE6GaYaA

Throwing it back to the days of the Boston Patriots, Babe Parilli was two-time All-American who played college football for Bear Bryant at the University of Kentucky. He brought that winning attitude to the Green Bay Packers as the fourth overall pick of the 1952 NFL Draft, but didn’t arrive in Boston until 1961 via trade.

Parilli guided the Pats to the 1963 NFL Championship game in the franchise’s fourth season, went to three AFL All-Star games, and became the second QB in history to reach 3,400 passing yards in a season. Parilli’s 44 wins as a starter ranks fourth on New England’s all-time list.

The pride of Kansas State University, Grogan was one of pro football’s most dangerous dual-threat quarterbacks in the late 1970s. As a rookie, Grogan winning the starting job from eventual two-time Super Bowl champion Jim Plunkett (Note: Plunkett didn’t make this list because his legacy came after his time with NE. Plunkett had an abysmal 23-38 record as the Pats’ starter and threw 87 interceptions against 62 touchdowns.) As for Grogan, he started every game for four years before numerous injuries and two strike-shortened seasons overtook his career.

In 1976, Grogan set an NFL record with 12 rushing touchdowns as a quarterback, which stood until Cam Newton scored 14 times during his 2011 MVP season. Two years later, the Pats set another NFL record with 3,165 rushing yards as a team, which still stands today; Grogan accounted for 539 of those yards. One year later, he led the NFL with 28 touchdown passes.

Grogan played his entire 16-year career with the Patriots, retiring with a 75-60 record in the regular season. However, Grogan never won a playoff game as New England’s starter and is the franchise’s all-time leader with 208 interceptions.

25 years ago today, the Patriots franchise changed when they drafted Drew Bledsoe first overall. He remembers with @jeffphowe https://t.co/hKnnWyZg6U pic.twitter.com/nsa2ILZbZG

The No. 1 overall draft pick in 1993 saved the Patriots. The team had nine total wins the previous three seasons and brought in head coach Bill Parcells to resurrect the franchise. Thankfully, New England landed one of the best passers in pro football that same year.

Drew Bledsoe made three Pro Bowls in his first eight seasons, and his 29,257 passing yards and 164 touchdown passes in that span trailed only Brett Favre. The 6-foot-5 gunslinger was the youngest QB to reach both the 10,000- and 20,000-yard marks for a career and led the Patriots to a berth in Super Bowl XXXI in 1996.

Bledsoe signed a massive 10-year, $103 million contract prior to the 2001 preseason, but suffered a sheared blood vessel in the second game of that year. Some kid named Tom Brady stepped in, but Bledsoe took over for an injured Brady in the 2001 AFC Championship Game and led New England to victory.

He was traded to the Buffalo Bills the next year, made his final Pro Bowl in 2002, and later retired with the Dallas Cowboys.

Bledsoe was on his way to being one of the most prolific quarterbacks to ever play, but a freak injury cut his time short with the Patriots. His 21 game-winning drives rank second in New England’s franchise history.

Not only that, Brady has helped groom backups on NE’s depth chart like Brian Hoyer and Jacoby Brissett (both with the Indianapolis Colts) and Jimmy Garoppolo (San Francisco 49ers) into legitimate starting quarterbacks. Honestly, don’t be surprised to see fourth-round pick Jarrett Stidham and Cody Kessler follow that same path, too.

READ MORE: The 9 Highest Paid Backup Quarterbacks in the NFL