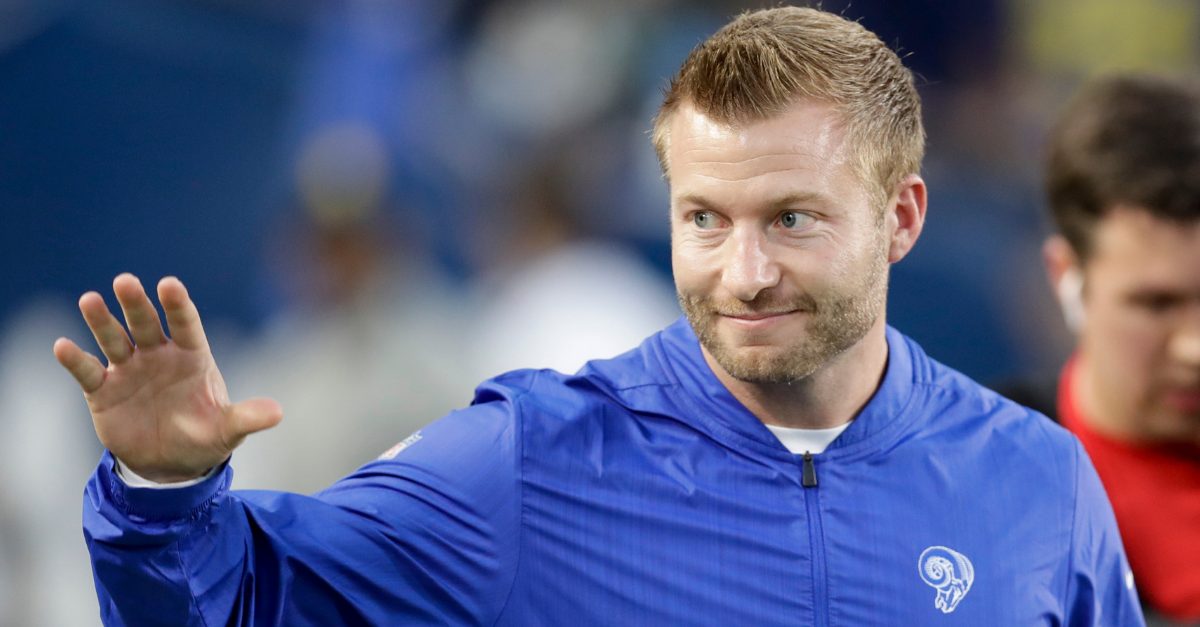 When you think of Los Angeles Rams head coach Sean McVay, what comes to mind? A damn good football mind and a rising star in the NFL should immediately be at the top of the list. Now you can had legendary prankster to it.

There is nothing light-hearted watching McVay pace the sidelines on Sundays. The 33-year-old Rams coach is as intense as it gets and definitely was in Super Bowl LIII against Bill Belichick and the New England Patriots. Thankfully, the youngest head coach in the league can shut it off and have a little fun every once in a while.

Not long ago, McVay told ESPN NFL Insider Adam Schefter on his Common Bonds podcast that he pulled off a savage prank on new Arizona Cardinals head coach Kliff Kingsbury at a dinner, and it’s one for the ages.

You see, McVay and Kingsbury were dining with NFL MVP and Kansas City Chiefs quarterback Patrick Mahomes, who played for Kingsbury during his run at Texas Tech. Sounds like nothing, right? Well, McVay almost convinced the rookie NFL coach he would be losing the No. 1 pick and other draft picks in the 2019 NFL Draft just for having dinner.

49ers’ HC Kyle Shanahan talks about the No. 2 pick and how close SF was to making a major splash.

Using a mutual contact and changing the contact information to NFL Commissioner Roger Goodell, a text in the middle of the dinner made the 39-year-old Kingsbury sweat.

“We have a mutual friend that I put his name in my phone as Roger Goodell. I had this friend send me a text saying, ‘I can’t believe you’re at dinner with Kingsbury and Mahomes. You know better than this. This is tampering. You’re both losing picks.’

“I showed Kliff the text and he saw a ghost. I said, ‘You better call (Cardinals General Manager) Steve Keim right away.’ He said, ‘I thought I was going to lose the No. 1 overall pick.’

“We couldn’t let it go on too long, but it was pretty good. We got him good. I was talking to him about that yesterday when I saw. I’m pretty proud of that one.”

So what was Kingsbury’s response? “That’s messed up. I’m getting you back, man.”

McVay, who led Los Angeles to an appearance in Super Bowl LIII last season with quarterback Jared Goff, running back Todd Gurley and a nasty defense, has a lot of nice things to say about Kingsbury at the beginning of the podcast and the potential of him helping making the NFC West even more competitive down the road. However, this April Fools-like prank was cruel and hilarious.

The dinner was legal, no tampering happened, and the three had quite the time from what it sounds like. You better believe Cardinals coach Kliff Kingsbury will never forget it.

READ MORE: The Rams’ Win-Now Philosophy Cost a Fortune, But It’s Worth Every Penny