Los Angeles Rams head coach Sean McVay is a football genius. If becoming the youngest head coach in NFL history wasn't enough, the guy remembers every single play of his career like it happened this morning. There's no doubt the 36-year-old has a bright future, and he will get to enjoy his coaching career with his special someone.

Sorry ladies, McVay married longtime girlfriend Veronika Khomyn in the offseason prior to the 2022 NFL season. He popped the question during an offseason vacation to France in 2019, and they officially tied the knot in June 2022.

So who is McVay's stunning wife? Let's find out.

Sean McVay's Wife Veronika Khomyn Met Him While in College 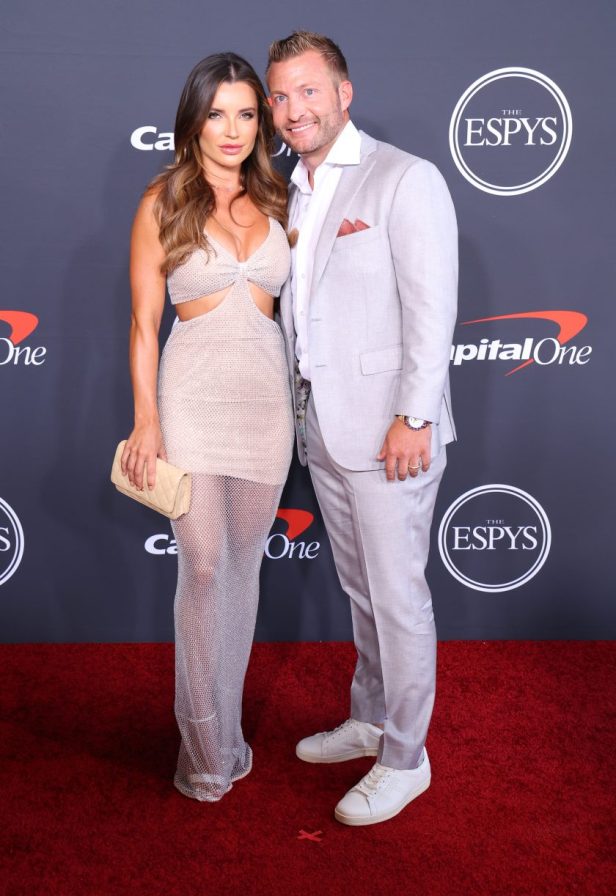 Veronika Khomyn is a 32-year-old model from Ukraine. She met Sean McVay for the first time sometime between 2011 and 2013 when she was a student at George Mason University in Fairfax, Virginia.

At the time, McVay was an assistant coach for the Washington Redskins (excuse me, the Washington Football Team). He served as an offensive assistant, assistant tight ends coach and offensive coordinator until the Los Angeles Rams hired him as their head football coach before the 2017 season.

She followed her boyfriend to California, where they lived in a six-bedroom, six-bathroom 4,600-square-foot house in Encino. It was featured during HBO's "Hard Knocks" series in 2020, which highlighted the Rams coach's life during training camp. However, he upgraded to a 9,000-square-foot farmhouse-style mansion in Hidden Hills for $14 million in April 2022.

Khomyn has done well for herself, too. The Ukrainian model is active on social media and has an Instagram account with over 85,000 followers. She has also done modeling gigs, including at UFC gyms, and has a net worth of approximately $1 million, according to Celebrity Net Worth. According to her LinkedIn, she's a luxury real estate agent and just received her real estate license in 2021.

The two officially tied the knot on June 4, 2022. They exchanged vows at The Beverly Hills Hotel in California. Hilariously enough, there was a Lombardi Trophy-shaped cake at the wedding, which McVay, of course, took a bite out of.

Her popularity certainly skyrocketed when the LA Rams made it to Super Bowl LIII against the New England Patriots. McVay's model girlfriend wore a "McBae" T-shirt during the 2019 NFL playoffs, which featured the NFL coach as a cartoon character.

The two were also spotted in L.A. after the Rams beat the Dallas Cowboys and advanced to play the New Orleans Saints in the 2019 NFC Championship. Veronika regularly shows support for her significant other, both at SoFi Stadium and online.

McVay, the son of Tim McVay, has come a long way in his career in a very short time. From playing high school football at Marist School in Georgia to college football as a wide receiver for Miami (Ohio) to coaching some of the greatest football players in the game and leading an NFL franchise all in less than 15 years is impressive.

The Rams were revitalized last year with the additions of Matthew Stafford, Von Miller and Odell Beckham Jr. Add another Cooper Kupp stellar season, and the Rams have set themselves up for another run at the Lombardi Trophy.

Veronika Khomyn has been there every step of the way, too.