Lou Holtz was contractually obligated to pick Notre Dame to win the national championship every year he worked at ESPN. There wasn't a man in media who cared less about publicly being a homer. That's who I remember Lou Holtz as -- the guy who wouldn't be caught dead picking anyone to beat the Fighting Irish.

Holtz was unapologetically dedicated to Notre Dame on air because he himself led the team to a national title in 1988. It was by far the highlight of his coaching career, so it wasn't too surprising he was loyal to an unwavering degree. The college football coach spent 11 seasons in South Bend, going 100-30-2 during his time there.

However, while Holtz is most commonly associated with Notre Dame, it was just one of many stops of his coaching career. He was an assistant coach at Iowa, William & Mary, Connecticut, South Carolina and Ohio State before returning to William & Mary in 1969 to take over as the program's head coach. He went on to lead North Carolina State, the NFL's New York Jets for one season, Arkansas, Minnesota and South Carolina in addition to the Irish before retiring from coaching in 2004. He was inducted into the College Football Hall of Fame in 2008.

All in all, Holtz went 249-132-7 in his 33 years as a college football head coach. Along the way, he taught his son, Skip Holtz, the ropes. The younger Holtz has plenty of college football experience like his father, but now, he's taking on a new challenge by leading the Birmingham Stallions of the USFL. 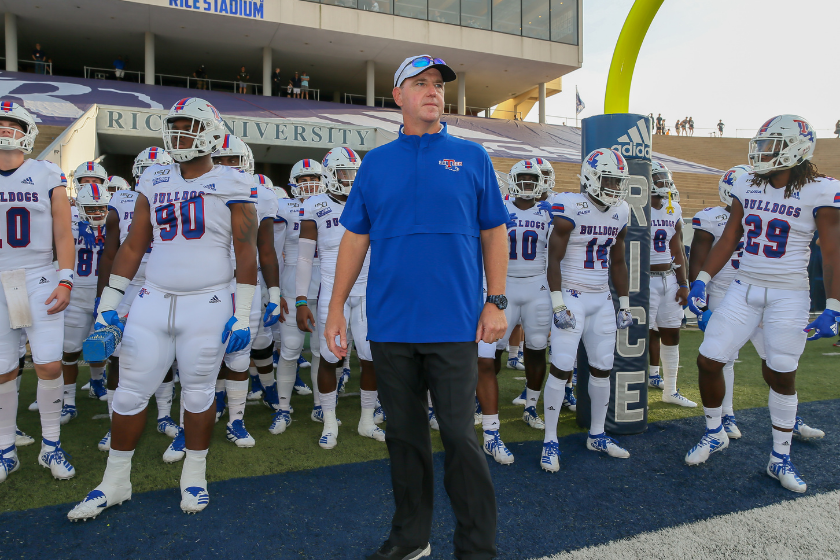 Skip got his start in football by playing quarterback for Fayetteville High School while his dad was coaching Arkansas. He went to Holy Cross College in Indiana for two years and transferred to Notre Dame to finish his college career. Meanwhile, Lou was hired by Notre Dame before Skip's senior season and allowed him to walk-on as a wide receiver. He didn't end up seeing the field much, but he caught the coaching bug from his father even though he tried to steer him away from it.

"When I told [my dad] after my junior year, he said don't do it, it's a crazy profession, you're always moving around, it's hard to have a strong family life and so on and so on," recalled Holtz to The Washington Post in 1990.

"I told him I know that, I'd been around it all my life and it's what I wanted to do."

"He kept trying to discourage me but finally said, 'If you're set in your ways, make sure your mother is unarmed when you tell her.'"

After getting his degree, Skip became a graduate assistant under Bobby Bowden at Florida State. He led the wide receivers at Colorado State for his first full-time coaching job before his dad brought him onto the Notre Dame staff in 1990. Skip worked his way up to offensive coordinator and received his first head coaching job at UConn in 1994 at the age of 30.

He fared well in his five seasons in Storrs, going 34-23 and reaching the NCAA I-AA quarterfinal in his final season, but he decided to rejoin his father's staff when he took the South Carolina job in 1999. He spent five seasons as the offensive coordinator and associate head coach before becoming a head coach again at East Carolina.

East Carolina is where Skip had his most success as a head football coach, winning two Conference USA titles and reaching four bowl games. He then moved onto South Florida, where he went 16-21 in three seasons, before taking his most recent job at Louisiana Tech. Holtz led the Bulldogs to six straight bowl wins from 2014 to 2019 and won the C-USA Coach of the Year award in 2016, but was fired after the 2021 season after going 3-9.

Skip Holtz Will Lead the USFL's Birmingham Stallions in 2022

Off to the races ?

In January 2022, Holtz was named the head coach of the Birmingham Stallions of the new look USFL. Holtz is one of many recognizable football names who will be leading a team. Others include Jeff Fisher of the Michigan Panthers, Mike Riley of the New Jersey Generals, Kevin Sumlin of the Houston Gamblers, Todd Haley of the Tampa Bay Bandits, Larry Fedora of the New Orleans Breakers and Bart Andrus of the Philadelphia Stars.

Who knows where Skip would be had he listened to his father's advice over 30 years ago. It's a good thing he didn't because he had the fortune of learning from a parent with a bright football mind.