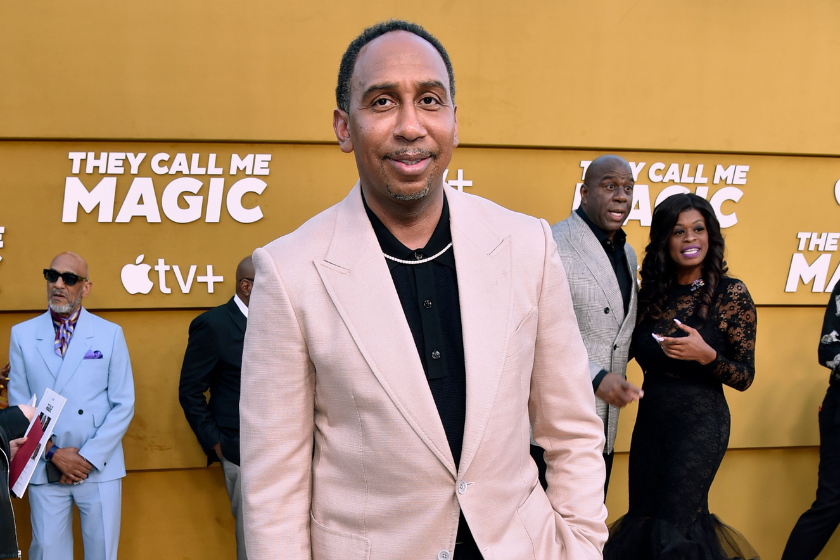 There may not be a more annoying person in American sports than Stephen A. Smith. Actually, let me rephrase that: ESPN’s top TV personality is the most annoying person. Smith has even admitted that himself.

The 54-year-old co-host of “First Take” has made a living on social media getting into screaming matches on live TV, telling NFL players to lay off the weed, calling Green Bay Packers quarterback Aaron Rodgers a “baaaaaad man” and getting in Twitter beefs with Kevin Durant.

Like him or not, Smith is practically the face of the Worldwide Leader in Sports along with Scott Van Pelt. Although, they’re on the complete opposite ends of the likability spectrum. In addition to commentating on ESPN’s “First Take,” he appears as an NBA analyst on “SportsCenter” and “NBA Countdown.” He also serves as the radio host of The Stephen A. Smith Show on ESPN Radio. Even the loud mouth’s writing is featured on ESPN.com and for The Philadelphia Inquirer.

Smith inked a massive five-year deal with ESPN in 2019 that pays him $8 million per year in addition to a $4 million production deal, meaning a sportscaster who says the most absurd things possible on TV earns more money than Dalvin Cook, Travis Kelce and Tom Brady will make this season.

Unsurprisingly, Stephen A. Smith has stacked up a lofty bank account over the years at ESPN. How much is he worth today? Let’s just say he isn’t hurting from money.

Stephen A. Smith’s Background: From the Bronx to Winston-Salem

Stephen Anthony Smith was born in the Bronx, New York City, and was one of six children. He had four older sisters and his younger brother, Basil, was killed in a car accident in 1992.

His parents are originally from the U.S. Virgin Islands. Smith’s dad, who he rarely talked to before he passed away in 2018, managed a hardware store. His mother, Janet Smith, died in 2017 after a battle with cancer.

After his early life attending Thomas Edison High School in Queens, Smith spent one year at the Fashion Institute of Technology before receiving a college basketball scholarship to play at Winston-Salem State University, a historically black university in North Carolina. He became a basketball player under Hall-of-Fame coach Clarence Gaines and joined the Omega Psi Phi fraternity.

His Road to ESPN

Smith hasn’t always been a talking head on the tube. He began a career in print media (& sports media) as a sports journalist with the Winston-Salem Journal, the Greensboro News and Record and the New York Daily News after college. In 1994, Smith landed a gig as a writer for The Philadelphia Inquirer, where he covered the Philadelphia 76ers and the NBA before transitioning into a general sports columnist.

ESPN gave Smith his own TV show in 2005, called “Quite Frankly with Stephen A. Smith.” That aired until its cancellation in 2007, when Smith then served as a Sunday morning anchor on “SportsCenter” and an NBA analyst and guest on shows like “Pardon the Interruption” and “Jim Rome is Burning.” The sports television personality also began his radio host career in 2005. He hosted a weekday two-hour radio show in New York City. ESPN Radio began broadcasting the second hour of his show nationally in 2007.

When Smith speaks, people listen. But he hasn’t always just spewed opinions. In 2009 when he left ESPN for Fox Sports Radio, he broke Allen Iverson’s retirement story. As a morning show host for the network in 2010, he predicted that LeBron James, Chris Bosh and Dwyane Wade would all sign with the Miami Heat and form a super team. Of course, they did.

Smith made his way back to ESPN in 2011 and served as a columnist and weekday local radio show host. A year later, he launched into national prominence when he was named as a co-host of ESPN’s “First Take” alongside Skip Bayless. Smith took his talents to Sirius XM Radio in 2013 when he joined Chris Russo’s Mad Dog Sports Channel. However, ESPN brought the prominent sports voice back in 2017.

Currently, Smith is one of the hosts of the sports talk show ESPN’s “First Take,” which became wildly popular in 2012 when he and co-host Skip Bayless discussed (argued? shouted?) with each other over various sports topics. Recently, the two made waves because of Smith’s comments about Bayless on J.J. Redick’s “Old Man and The Three” podcast. They reportedly made amends. The two-hour long show formerly pitted Max Kellerman against Smith. Now, a rotating group of co-hosts, including Chris “Mad Dog” Russo, joust with Smith and Molly Qerim features as the moderator.

It hasn’t been all smooth sailing between ESPN and Smith, though. The network suspended him for a week in 2014 for his controversial comments about former NFL running back Ray Rice’s domestic abuse scandal.

Stephen A. Smith Net Worth

Stephen A. Smith is a man of many talents. Oberto jerky recruited him as “the little voice in your stomach” in commercials. His acting career includes cameos in in ABC soap opera “General Hospital” and Chris Rock’s “I Think I Love My Wife.”

Considering he was making a reported $5 million each year before landing his mega contract in 2019 with ESPN, according to the New York Post, Smith has built a pretty sizable net worth over his 30-year media career.

According to Celebrity Net Worth, Stephen A. Smith is worth $16 million today. Though it isn’t quite as large as some of the other figures in his field like Bob Costas or Al Michaels, it’s still a good chunk of change for the expert in screaming matches. And you have to give the man some credit. He sure as hell knows how to entertain people.

Still just 53 years old and one of ESPN’s most-valued employees, don’t expect Stephen A. Smith or his cowboy hat to go anywhere.

This post was originally published on April 15, 2020 but has been updated.

MORE: Skip Bayless’ Net Worth: How Talking Sports Made Him “Undisputedly” Rich