On February 3rd, 2013, one of the more controversial moments in NFL and Super Bowl history took place in New Orleans, and it completely changed the legacy of Colin Kaepernick.

A few minutes into the second half of Super Bowl XLVII between the San Francisco 49ers and Baltimore Ravens, there was a 34-minute power outage that led to a complete change in momentum and allowed Kaepernick and the 49ers to climb back into the game.

Colin Kaepernick was solid in the first half, completing 8 of 13 pass attempts for 139 yards, but he threw an interception to Ed Reed inside San Francisco territory. He also didn't hurt the Ravens' defense using his legs, picking up just 16 yards on two carries. This only led to six points for his team with David Akers connecting on two field goals.

Oregon alum LaMichael James also fumbled in the first half, which led to a Dennis Pitta one-yard touchdown catch.

After Beyonce performed during the halftime show, the former University of Nevada quarterback found his stride and took over the second half, and this difference may have been caused by a blackout.

What Caused the Blackout at Super Bowl 47? 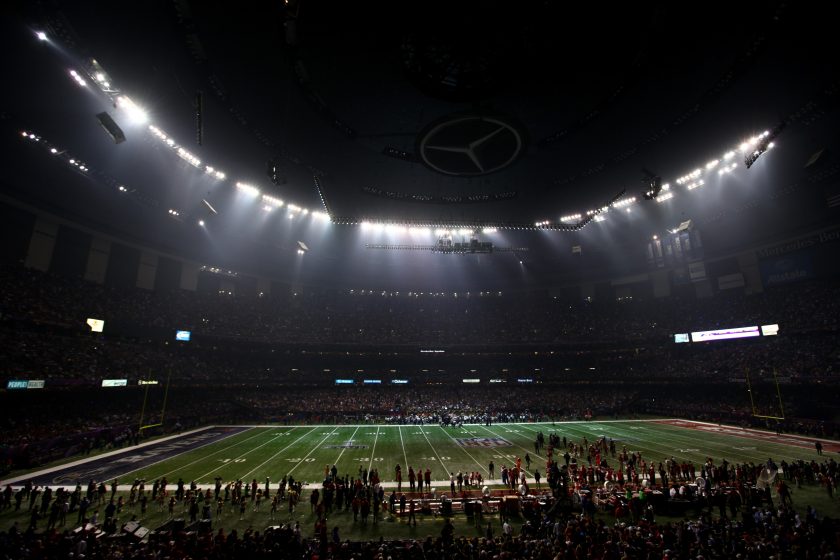 With 13 minutes and 22 seconds remaining in the third quarter, the power went out and Mercedes-Benz Superdome went dark. It last 34 long, dark minutes.

The blackout was a result of a failed device that was "meant to protect the power supply to the Superdome," according to The Guardian. The stadium's power company said the device had zero issues at the Sugar Bowl in January just a month before the Super Bowl.

At that point in the game, the 49ers were trailing 28-6 after Jacoby Jones began the second half with a 108-yard kickoff return for a touchdown that seemed to doom San Francisco.

With just nine starts entering this matchup for Kaepernick, did Baltimore figure out how to stop the dual-threat quarterback that took the NFL by storm? 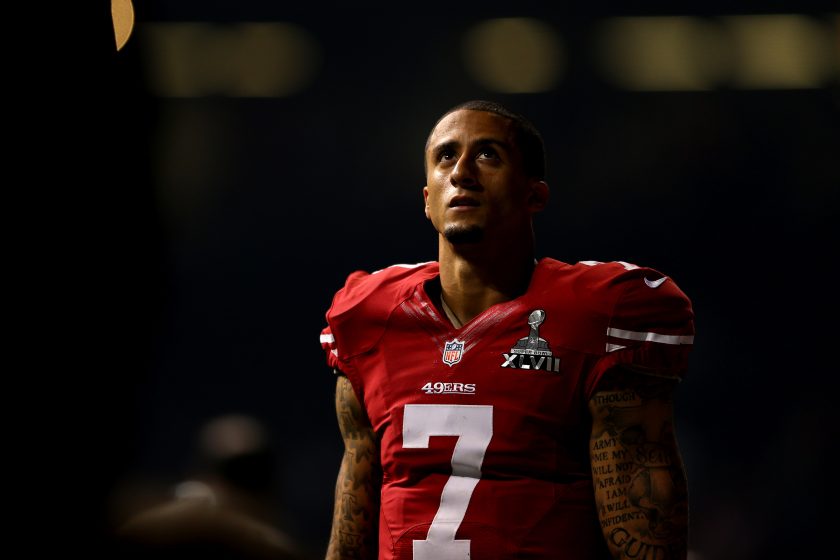 RELATED: Colin Kaepernick's Girlfriend Always Has His Back & Speaks Her Mind

It was at this point the momentum of the game changed, and San Fran would close the game on a 25-6 run, but it still wouldn't be enough. Justin Tucker hit a 38-yard field goal late in the game to go up five points. That run also included two points at the end of the game when Sam Koch took a safety instead of taking a chance on a punt.

But it was this run that showed how good of a quarterback Kaepernick could be. If the Super Bowl ended in a blowout like it looked early, many would have considered him a nonviable option to lead their team. In that second half, Kaepernick completed 8-of-15 attempts for 163 yards and a touchdown while also rushing for 46 yards and a score.

As a whole, Kaepernick played a pretty good game. He completed 16-of-28 passes for 302 yards, one touchdown and one interception and also rushed for 62 yards and a touchdown on just seven carries. More impressively, this came against a Ravens defense that was one of the best in the league, led by future Pro Football Hall of Fame inductees Reed, Ray Lewis and Terrell Suggs, the latter of whom will join them in Canton some day, too. 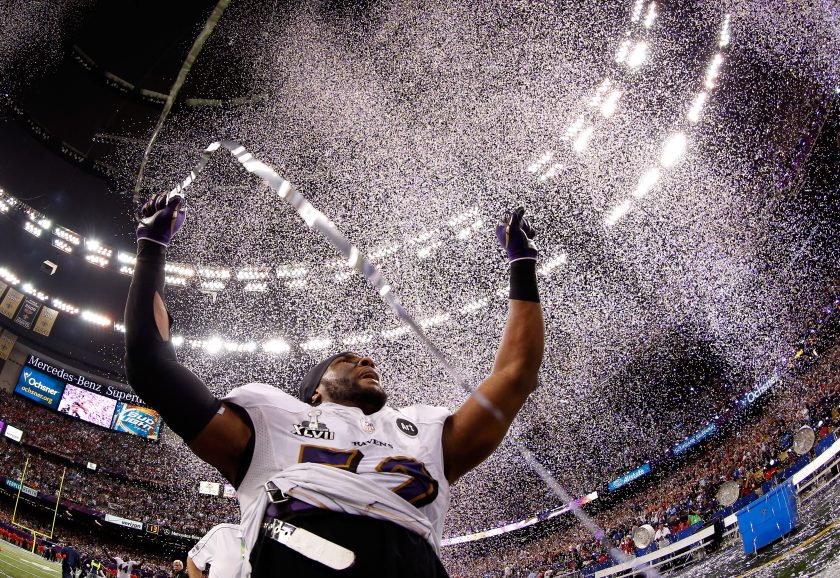 Still, Kaepernick's heroics were not enough. Joe Flacco was named the game's MVP as Baltimore won, 34-31.

Across from Kaepernick was Joe Flacco, who was also starting his first championship game after beating the Indianapolis Colts, Denver Broncos, and New England Patriots in the AFC playoffs. Beating Tom Brady, Peyton Manning and Andrew Luck on his way to a Lombardi Trophy got Flacco paid very well, too.

Though his stats weren't far more impressive after the power outage, Kaepernick's performance helped keep his legacy in tact. However, it was more about how Baltimore fell flat in that second half. Allowing the 49ers to make the game close helps people remember Kaepernick a little more fondly even though he didn't pull out the win, including missing on four of his final five throws down near the end zone.

If the game remained a huge blowout, everyone would say Kaep had empty stats that didn't matter and that a run-first quarterback can't win the big game. But pushing this Super Bowl until the final minute changes those opinions, at least a little bit.

Plus, Kaepernick took over a team that struggled to reach a Super Bowl with Alex Smith at quarterback. Just one season before, San Francisco lost to the New York Giants in the 2011 NFC Championship. 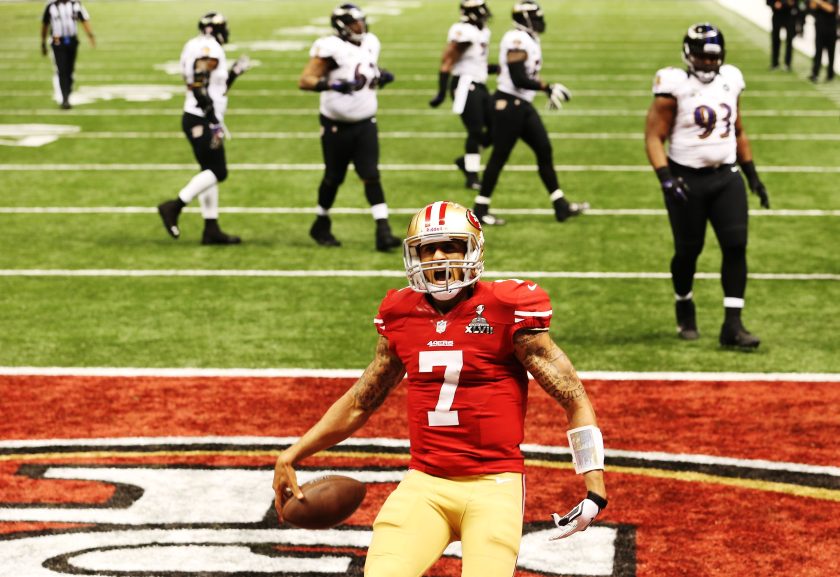 He did have quite a bit of talent to throw to, finding Vernon Davis and Michael Crabtree for a combined 11 catches and 203 yards in that Super Bowl. Crabtree led the game with 109 receiving yards, while Davis was tied with the Ravens' Anquan Boldin for a game-high six catches. Delanie Walker (three catches for 48 yards) and Randy Moss (two catches for 41 yards) were also important to Kaepernick's success in the game.

Frank Gore, one of the best running backs in San Francisco history, finished the game as the leading rusher with 110 yards and a touchdown on 19 carries, including a 33-yard run on the final possession that got them deep into Ravens' territory. Ray Rice led Baltimore with 59 yards on 20 carries.

Super Bowl 47 has multiple nicknames, such as the Blackout Bowl and Harbaugh Bowl. The Blackout Bowl is in obvious reference to the power outage that took place in the second half of the game. The Harbaugh Bowl is in reference to each team's head coach, and the first time a Super Bowl featured two brothers as head coaches with John Harbaugh coaching the Ravens and Jim Harbaugh coaching the 49ers.

What it's remembered for most, though, is the blackout that saved Colin Kaepernick's team from potentially one of the biggest blowouts in Super Bowl history.

This article was originally published May 20, 2019.

MORE: Colin Kaepernick's Net Worth: No NFL? No Problem